Yesterday, Chevron's annual shareholders meeting erupted into outrage and arrests, as the company barred twenty concerned community leaders from attending the meeting, despite the fact that they came as legal proxies for Chevron shareholders large and small. Chevron management systematically denied entry to community members negatively affected by Chevron's operations in Ecuador, Nigeria, Burma, the Philippines, Canada and several other nations around the world.

Five people were arrested, including Amazon Watch corporate campaigns director Mitch Anderson and myself (coordinator of the Clean Up Ecuador campaign) alongside environmental justice leaders Juan Parras of Houston and Rev. Ken Davis from Richmond, California. After being barred from the meeting, the four of us refused to leave the site of the meeting, demanding to be allowed in. Before long, we were taken into custody at the direction of Chevron security personnel. 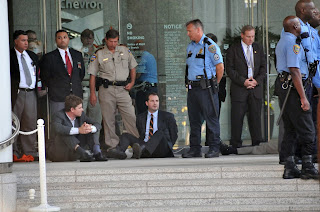 
The fifth person– Antonia Juhasz, coordinator of the 'True Cost of Chevron' coalition– was arrested while inside the shareholder meeting. Amazon Watch's Mitch & Han, and the other two men were released after posting bail around 4am on Thursday morning, while Antonia was bailed from Houston County Jail only minutes ago [Thursday, 1:15pm].

In an unprecedented move which shocked many shareholders, Chevron barred 20 out of 27 community members who arrived at the meeting as valid and legal proxy shareholders, according to existing corporate governance rules. 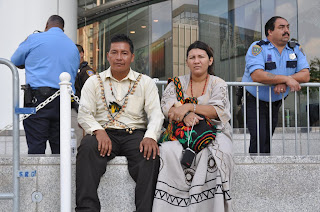 Quite simply, Chevron's Board of Directors has been asleep at the wheel while the company's management silences critics and lies about its responsibility for a massive human and environmental tragedy in Ecuador.

Please TAKE ACTION NOW to send an message to Chevron's Board of Directors, and tell them that it's time for the lies to end, and the clean-up in Ecuador to begin!