Next week at Chevron's 2010 annual shareholders meeting in Houston, members of communities that have been adversely affected by the oil giant's operations will come from around the world to demand justice from the company.

Amazon Watch's Clean Up Ecuador Campaign is helping to bring two community members from the Amazon rainforest region devastated by Texaco, now Chevron. They are among 30,000 plaintiffs in a monumental class-action lawsuit against Chevron demanding environmental clean-up and compensation for the impacts of the company on their lives and livelihoods.

Born in 1939 in the southern Ecuadorian province of Loja, Mariana Jimenez has twenty-seven grandchildren from her seven children. Seeking to escape a devastating multi-year drought in Loja and hoping for a better fortune, Mariana and her family moved in 1971 to ‘Nueva Loja’, an emerging boom-town in Ecuador’s northern Amazon region.

But what they found in Nueva Loja (dubbed Lago Agrio, Spanish for Sour Lake after Texaco’s mega-reserve in Texas) was worse than any drought– it was ground zero for what would become the country’s largest oil operation and what experts believe may be the worst oil-related environmental disaster in the world.

Settling on a parcel of land near Texaco’s first well site, they were soon surrounded by oil wells and open-air toxic waste pits. Within a couple of years, they had intimate experience of the impacts of oil contamination.

“We asked what this black stuff was, and whether it might have any impact on our health. The only people who knew were Texaco engineers. They told us it wouldn’t do anything, that in fact, it was actually a remedy for ailments like rheumatism or gastritis,” recalled Jimenez.

Having confidence in Texaco’s words, Jimenez and her family drank the water, bathed in it, and used it to wash their clothes. Before long, the problems began.

Jimenez recalls “infinite” oil spills, some of which covered her farm in crude and salty ‘produced water’– the chemical-laced toxic water pumped from underground formations during oil drilling. Poorly constructed waste pits overflowed under heavy rains, and others were simply set on fire. 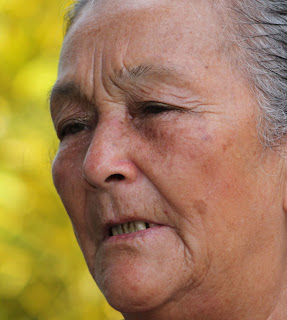 
“Our clothes hung out to dry would stain from the drops of black rain, and our pants would be covered in oil from walking along roads that Texaco covered with crude to keep the dust down. When it was sunny, it was like you were stepping in a hot, sweet pie. And all that oil went into the streams.”

Their crops of cacao, yucca, plantain, and coffee dried up. Their animals fell in the crude, and, attracted to the salt of the produced water, drank from the spills. Jimenez estimates they lost some 65 pigs. She recalled, “We would open them up, and their stomachs were full of crude.”

It wasn’t long until her family discovered that oil was the source, not salve, of their health problems. Her family began to experience skin rashes, headaches, and pain. One of her daughters needed extensive and costly treatment for throat problems that doctors associated with ingesting petroleum. But she was lucky. Another sister died of cancer, as did her husband, a former Texaco worker.

Jimenez appears in a brief video that Amazon Watch released in January, 2010. In the video, indigenous people and campesino settlers from the Amazon region polluted by Chevron/Texaco speak out directly to John Watson, who became new CEO of Chevron corporation on January 1st.

In a few days, Mariana Jimenez will be at Chevron's shareholders meeting in Houston hoping to appeal to John Watson in person to do the right thing and lead his company to clean up its mess.

“Texaco did whatever it wanted—drilled wells where every they wanted, put pipelines where they wanted, and dumped waste wherever they wanted. They didn’t care at all about us. We’re only asking for a little bit of justice that’s been denied to us for so long.”