Representing diverse communities around the world that have come together to challenge the impact of oil giant Chevron's operations on their lives, the 'True Cost of Chevron' coalition is unprecedented.

This morning, several dozen people – from Angola, Burma, Canada, Colombia, Ecuador, Kazakhstan, Nigeria, and several communities across the U.S. – gathered together to briefly plan our press conference on the day before Chevron's annual shareholders meeting. The room was buzzing with organizers, community leaders, and people with powerful stories of devastation, as well as resistance, against one of the largest companies in the world.

Soon, we headed downtown to Chevron's Houston headquarters, a tall, gleaming glass building in an urban area eerily devoid of foot traffic. A local told me that with the sweltering heat, many people choose to use underground, air-conditioned tunnels to move from parking lot to building and between buildings. 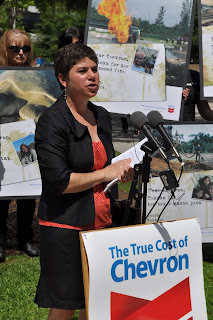 Reporters and camera people set up as our group organized themselves as we found our places. Antonia Juhasz, editor of the 'True Cost of Chevron' Alternative Annual Report – and author of the must-read muckraking book The Tyranny of Oil – kicked off the event with some context and introductions. With that, a succession of powerful speakers recounted stories of Chevron's impact in their community. 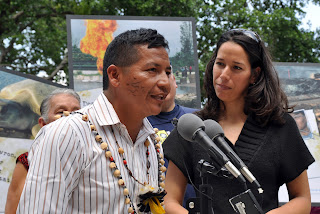 Guillermo Grefa, profiled here yesterday, spoke powerfully about the devastation that followed in the wake of Chevron subsidiary Texaco's arrival in the Ecuadorean Amazon.

Grefa implored the gathered crowd not to be deceived by Chevron: "I've seen the contamination the company brought and experienced it first hand." 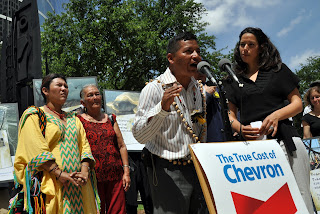 At one point he emphatically said, "Chevron lies, lies, lies!" 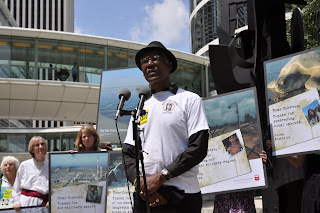 More people told their powerful stories of the cost of Chevron to their communities before the press conference wrapped up and some speakers stepped aside for brief interviews with reporters on hand.

The assembled group then walked up the steps to the headquarters, intent on demanding an opportunity to deliver a copy of the Alternative Annual Report to new Chevron CEO John Watson. 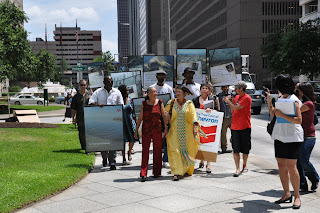 As the community members gathered in the lobby, a public relations representative refused to allow the group to join him or any other representative for a conversation. 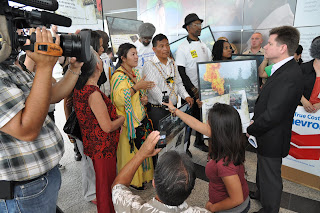 Police and Chevron security officials stood close to the group as individuals took a moment to demand answers from the oil giant. Read the coalition press release here. 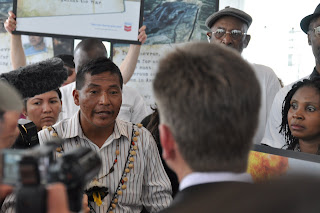 While the stories of Chevron's abuse of communities and the environment from Ecuador to Nigeria to Louisiana to Kazakhstan is tragic, it has been impossible not to be inspired by the power of this group that is coming together to challenge the company and pave a path to a future – in the words of our friends at RAN's Change Chevron campaign – in which energy doesn't cost lives.

Speaking of which, thanks to Jonathan Mcintosh from the Change Chevron campaign for use of his photos. See more of Jon's photos here.