Served by Chevron, and It Just Warms Us Up 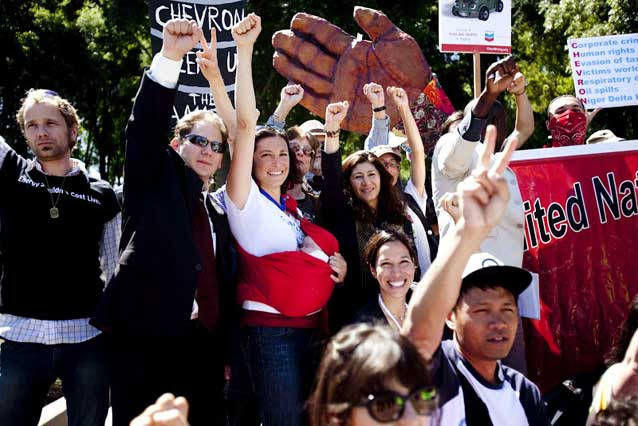 Last Wednesday morning, I opened my front door to take my two small children to preschool and before I could take a step a man shoved subpoena papers at me from Chevron. At that moment, I knew Amazon Watch had been doing something right in our relentless campaign to hold the company accountable for the toxic mess it left in the Ecuadorian Amazon. When a giant corporation like Chevron bothers to subpoena a small nonprofit like Amazon Watch, we know our actions are hitting hard. Never mind their audacity to come to my home, that's the least of their offenses.

Nearly 50 years ago, Texaco (now Chevron) arrived in a pristine region of the Ecuadorian Amazon, and over the course of the next two decades, caused one of the worst oil-related environmental disasters in history. As most readers of this blog know, in February of 2011 Chevron was found guilty in Ecuadorian courts for massive environmental contamination, and fined upwards of $18 billion for its crimes. Instead of owning up to its toxic legacy in the Amazon – a crime which has caused more than a thousand cancer deaths, led to an ongoing public health crisis, and has decimated indigenous cultures – Chevron has decided to "fight the verdict till hell freezes over."

What does a "fight till hell freezes over" strategy look like? Well, it's ugly. It involves high-powered (and unprincipled, often morally depraved) law firms. It involves smart (and equally twisted and cynical) public relations firms. It involves a herd of big-oil lobbyists. It involves near limitless resources (it's estimated that Chevron is spending several hundred million dollars a year to fight the Ecuador lawsuit). And it also involves a plan – in military terms known as "scorched-earth" – to destroy everything and everyone that is valuable to the people of the Ecuadorian Amazon in their pursuit of justice.

In order to execute this plan, Chevron has launched a massive worldwide litigation effort designed to convince courts across the world that the plaintiffs, famers and indigenous people of the Amazon, are engaged in a massive global conspiracy to defraud and extort one of the largest multinational corporations on the planet. The company has filed racketeering charges against the named plaintiffs in the lawsuit, subpoenaed and deposed the lawyers of the thirty thousand affected people of the Amazon, won discovery of over 600 hours of outtakes from the film Crude, intimidated large-institutional investors of the company, attempted to quash preferential trade agreements between the US and Ecuador…and the list goes on.

And now, they're coming after Amazon Watch. On December 12th Chevron filed a subpoena, which if complied with, would require Amazon Watch to turn over hundreds of thousands of emails, documents and internal communications related to the historical struggle for justice in the Amazon. They are accusing Amazon Watch of playing a role in an alleged conspiracy to defraud the company, and are using this make-believe theory as a pretext to gain access to our confidential information. They want the blueprints of our campaigns against Chevron, internal strategy documents, our communications with anyone and everyone that has ever been involved in the long-running trial. Not only is this invasive subpoena request a flagrant attack on our first-amendment rights, it is also an attempt at miring our organization in a protected and tangential lawsuit, designed to burden our resources and distract us from our goal: justice in the Amazon.

Although we view Chevron's subpoena as a calculated effort to silence us, we will not back down; we will continue to support the people of Lago Agrio who seek justice and clean water.

The company's actions – their "fight till hell freezes over" strategy – is actually proving us right. They are criminals and they are cowards. Their crimes in the Amazon have caused the deep and undeniable suffering of thousands of people. And their litigation strategy, designed to destroy any organization or individual involved in supporting the farmers and the indigenous people of the Amazon, is nearly as wicked as their original poisoning of the rivers and streams of one of the greatest rainforests on earth.

What we are witnessing now is the last chapter of a 50-year campaign of human rights abuses by Chevron. And if they are successful in their desperate subpoena of hundreds of thousands of Amazon Watch documents, what they will find, ironically, is not that AW has been part of any alleged conspiracy, but rather nothing more than the spirit, the resolve, the compassion, and the intellect that we have brought to telling the truth about what Chevron did in Ecuador, and that in turn has helped bring the company to its knees.