Driving the Company Off an $18 Billion Cliff 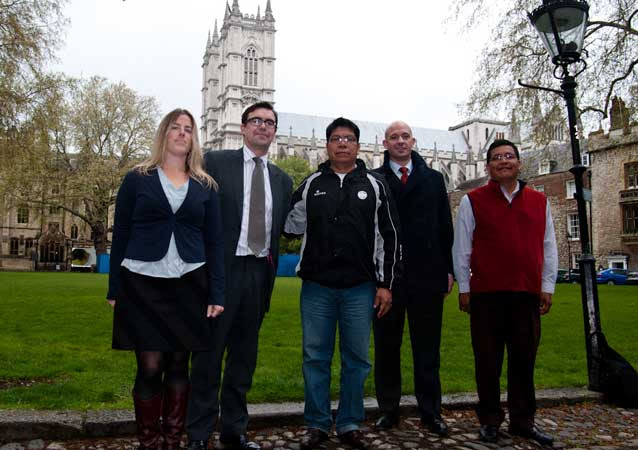 Ecuadorean indigenous leaders Humberto Piaguaje and Guillermo Grefa began a one week European tour today. They will be educating major institutional investors in Chevron Corporation, including prestigious funds such as the Church of England Investment Fund and the Central Finance Board of the Methodist Church, about the oil giant's grim environmental and human rights legacy in the Amazon. The fact that European investors are concerned about the American oil company's growing multi-billion liability over its Amazon disaster comes as no surprise.

Chevron was found guilty for environmental crimes in Ecuador in February of 2011 and fined upwards of $18 billion. Since that historic decision, Chevron's litigation prospects in the long-running environmental trial have dimmed considerably.

On January 3, 2012, an Ecuadorean appeals court confirmed the $18 billion verdict against Chevron, and two months later, on March 12th, an appellate court declared that the judgment is final and enforceable. Chevron has appealed the ruling to the National Court of Justice in the Andean capital city of Quito, but simultaneously refused to post a bond that would be required to stop enforceability of the verdict. In sum, after 19 years of litigation, the plaintiffs (more than 30,000 indigenous peoples and campesinos of Ecuador) have won an internationally valid judgement that can be enforced in Ecuador or any other country across the globe.

The landmark litigation has now entered a critical final chapter. The end game in this marathon legal process is likely to be an accelerating race against the clock, as lawyers for the plaintiffs attempt to enforce the judgement by seizing Chevron's key assets in Latin America (and elsewhere around the world), while Chevron desperately seeks legal stratagems to protect its tankers, oilfields and refineries from confiscation.

Of course, the huge financial stakes of this mammoth legal battle are not lost on Chevron investors. In 2011, only months after the historical $18 billion ruling, New York State Comptroller Thomas DiNapoli urged Chevron to settle the case:

It's time for Chevron to face reality,” said DiNapoli, trustee of the $140.6 billion New York State Common Retirement Fund (Fund), which owns 7.5 million Chevron shares worth an estimated $780 million. “The effects of this horrific, uncontrolled pollution of the Amazon rainforest are still being felt today. Investors don't derive any benefit from this never-ending courtroom drama. The entire case is looming like a hammer over shareholders' heads. Chevron should start fresh with a new approach that embraces environmental responsibility and risk management as part of its corporate culture. More legal proceedings will only delay the inevitable.

At the same time, a coalition of investors representing $156 billion in assets under management, which included the AFL–CIO, the International Brotherhood of Teamsters General Fund, and dozens of socially responsible and faith-based investors, signed a joint public statement saying: "In failing to negotiate a reasonable settlement prior to the Ecuadorian court's ruling against the company, we believe that Chevron displayed poor judgment that has led investors to question whether our Company's leadership can properly manage the array of environmental challenges and risks that it faces."

And now, across Europe, concerns about the American oil giant's handling of the Ecuador disaster are being raised by investors and politicians alike. Recently, Member of Parliament (MP) Martin Horwood wrote in a Huffington Post op-ed: “ I'm taking the case to my colleagues on the All Party Parliamentary Group for Tribal Peoples, to see what we can do to highlight it and help the long-suffering indigenous peoples of Ecuador. Now is the time to call Chevron to account, not only in the Court of Law but also in the Court of Public Opinion and to rally all stakeholders – politicians, investors and the public – to pressure Chevron to do the right thing.”

Additionally, MP Zac Goldsmith recently requested that the Secretary of State for Work and Pensions in the UK disclose whether the Secretary has assessed the risks that the Ecuador litigation presents to the value of the Pension Fund's significant holdings in Chevron.

What is clear is that as the long-running environmental trial in Ecuador enters its final chapter, and as Chevron's legal prospects dim, many investors and politicians across the globe are wondering: Why does Chevron insist on such an expensive and bullheaded approach to the Ecuador disaster? These are questions, of course, that have puzzled (and at times outraged) American investors in Chevron for many years. And this week, with Ecuadorean Indigenous leaders Humberto Piaguaje and Guillermo Grefa touring England and Norway, major European investors and politicians have begun to share in the bafflement and consternation of their American counterparts.

The takeaway from all of this? Well, there's a bit of a What's the Matter with Kansas? situation over at Chevron world headquarters in San Ramon. For a host of cultural and ideological reasons, Chevron management is acting against its own self-interest – and the interest of its shareholders. And in doing so, they are driving the company off an $18 billion cliff.

Below are two photos of Maria Aguinda, the indigenous woman who has achieved global fame as the grandmother who beat Chevron in the $18 billion environmental lawsuit in Ecuador.

The first photo shows Maria Aguinda in 1993, walking on an oil-slicked road near her community of Rumipamba in the Ecuadorian Amazon. At the time, she was a young mother. The historic lawsuit bearing her name was filed later the same year in New York federal court.

The second photo, taken last week, shows Maria Aguinda almost 19 years later on the steps of Ecuador's National Court of Justice in Quito, the court that is hearing Chevron's final appeal in the case.

According to Chevron, people like Maria Aguinda and thousands of other Ecuadorians who were harmed by the oil giant don't really exist. Chevron lawyer Doak Bishop said the following before an investor arbitration on February 15th: "The plaintiffs are really irrelevant. They always were irrelevant. There were never any real parties in interest in this case. The plaintiff's lawyers have no clients... There will be no prejudice to [the rainforest communities] or any individual by holding up enforcement of the judgment."

Here is a link to a Yahoo story about Maria Aguinda published in 2011, at the time Chevron was found liable for causing an ecological catastrophe and ordered to pay $18 billion in damages. Here is a background memo on the overwhelming evidence undergirding the trial court decision.