Actually They Are Pretty Shocking

During almost two decades of litigation against Chevron for the massive contamination of the Ecuador rainforest, the oil giant's spokespeople have said some of the darndest things.


When heard or read for the first time, they actually are pretty shocking, leading one to believe the company's executives are completely tone deaf.


They have so bought into their culture of corruption, they don't even recognize how outrageous or how shameful their words are.


Here are just a few for your reading astonishment.


"We can't let little countries screw around with big companies like this – companies that have made big investments around the world."

– An unnamed Chevron lobbyist about the company's efforts to convince Congress and the U.S. Trade Representative to deny Ecuador U.S. trade preferences in retaliation for the environmental lawsuit, Newsweek


"We will fight this until hell freezes over. And then we'll fight it out on the ice."

– Chevron spokesperson Donald Campbell to Global Post (We've got our skates on!)


"In the thousands of soil and water samples that we have taken in the Amazon, there has been no detection of any type of toxin that is not naturally occurring in the environment, and that is dangerous to human health or the environment."

– Chevron lawyer Silvia Garrigo to 60 Minutes that reported the Ecuador court received over 60,000 contaminated soil and water samples, of which most Chevron itself submitted.


"We've done inspections. We've done a deep scientific analysis, and that analysis has shown no harmful impacts from the operations. There just aren't any.

– A Chevron spokesperson to the New York Times.

Here's Why They Can't: It's Against The Law

These three men think they can demand that the Government of Ecuador instruct its judiciary system to protect the interests of this man, the CEO and Chairman of the Chevron Corporation, by undoing an $18 billion judgment in Ecuador against his company for massive contamination of the rainforest.


They are private arbitration lawyers who belong to a secret club, called the Permanent Court of Arbitration, otherwise known as a "Kangaroo Court." See this blog by the Rainforest Action Network.


They pretend to be part of The Hague, but they aren't. They simply have office space there, and they mostly meet in rented hotel conference rooms in cities across the globe. The lawyers sometimes act as "judges" on the panel, but other times they represent their corporate clients, making millions of dollars on each case. It's a very chummy club with everybody rubbing everybody's back – except the impoverished people who are often harmed by their actions.


Of late, they and other lawyers like them have been abusing provisions found in bilateral investment treaties between countries to protect many multinational corporations – Chevron being the most recent. See this link at Public Citizen's Global Trade Watch web site for other examples.


Here's how it works: Countries sign investment treaties with provisions designed primarily – or so the countries thought – to encourage economic growth and create jobs for their citizens. Sometimes corporations doing business in a foreign country don't like the way they are being treated, so they have the ability under many of the treaties to file an arbitration claim against the foreign government for relief. Mostly the claims are about commercial disputes that go before these private arbitration lawyers tasked with resolving the problem.


In the Chevron case, though, it's about much, much more.


The oil giant has convinced the panel to take an unprecedented step: demand Ecuador violate its Constitution by interfering in its judiciary system. The arbitration lawyers, meeting this weekend in closed-door sessions in Washington, DC, have ordered Ecuador to block enforcement of the Ecuadorians' judgment – a violation of not only Ecuador's Constitution but international law and long-standing human rights treaties. Chevron and Watson aren't stopping there, though. They want Ecuador to pay the judgment or even have the case dismissed altogether.


Imagine the White House telling the U.S. Supreme Court – only a few blocks from where the arbitration lawyers are huddled this weekend – to dismiss a recent ruling. That is why Chevron wants to happen in Ecuador.


The whole thing is a charade and mocks the justice that the Ecuadorians seek after having their lives, land, and water ruined with toxic poison during three decades of oil drilling and exploration by Chevron.


Meanwhile, the Ecuadorians are not deterred. They are moving forward with their $18 billion judgment and are preparing to enforce soon in countries where Chevron has assets. Ecuador's government has ignored the panel's demand and is standing firmly behind the findings of its court system.


The Ecuadorians do not believe the findings of this kangaroo court will impact their ability to enforce in courtrooms, not in the control of a chummy, secret pack of expensive lawyers.


And, they have international experts from across the globe backing them up. See here and here . They have written the United Nations to protest that the arbitration's findings "offends ... legal systems" everywhere.


“Allowing (arbitration) panels to determine recognition and enforcement issues in private litigation transforms them into venues of final appeal in a way that was never intended and offends the inherent trustworthiness of legal systems around the world to determine matters for themselves,” they wrote. 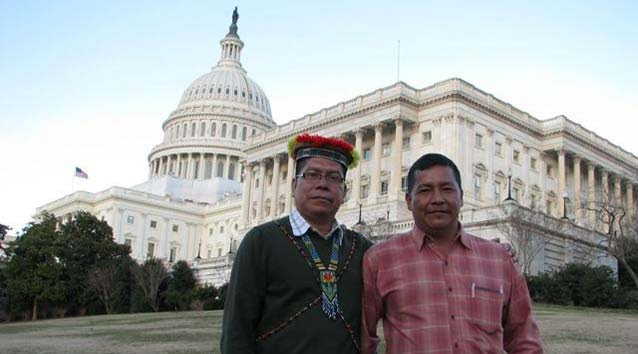 What kind of court pays its judges millions of dollars, gives them huge vested interests in blocking environmental and social protections, and acts in total secrecy?


After losing court rulings in Ecuador and the United States in recent weeks, Chevron has one remaining hope: Betting everything on an obscure private arbitration panel acting under the mantle of the U.S.-Ecuador Bilateral Investment Treaty.


On Saturday and Sunday, Feb. 11-12, the panel will hold a hearing in Washington D.C. that could play a crucial role in the case.


Just two weeks ago, Jan. 25, the panel showed its sympathy for Chevron by strengthening a previous measure ordering the Ecuadorian government to do everything in its power to stall the Chevron lawsuit.

The company has asked the arbitration panel to declare that the marathon process of trial and appeals in Ecuador is essentially null and void, and to order that the Ecuadorian government must pay Chevron's $18 billion in damages. That would be a game changer, Chevron hopes, tying the plaintiffs' hands and guaranteeing years more of costly litigation.


The global network of arbitration panels has long served a legitimate yet narrow purpose: to facilitate commercial dispute resolution across international borders in a way that promotes economic development and consistency in the law. But they have no legal authority to decide major questions of international law. Members of this panel apparently are claiming the outrageous power to override decisions of any public court system of any sovereign nation. Meanwhile, the arbitration rules prohibit third parties who are the most affected, such as the Ecuadorean plaintiffs, from being represented on the panel.


Amazon Watch, Rainforest Action Network and other environmental groups are deeply concerned that this case could set a dangerous precedent in which environmental protections and human rights worldwide are essentially vetoed by arbitral tribunals that have no rights to do so under international law.


What's worse, the arbitration process has a built-in conflict of interest. Unlike judges at a real court, who receive a fixed salary, commercial arbitrators are typically paid at top lawyers' hourly rates, thus earning millions of dollars from a drawn-out case, which typically last several years. Arbitrators who are seen as business-friendly are guaranteed a steady stream of lucrative cases, thus compounding the potential profit motive. In other words, by blocking justice for Ecuadorians, the panel members will enrich themselves by millions of dollars each.


In the past few days, Amazon Watch has hosted Ecuadorian indigenous leaders Humberto Piaguaje and Guillermo Grefa in a visit to Washington, D.C. We have tried to draw attention to this corporate star chamber and to pull its mysterious panelists out of the shadows.

On Feb. 8, Amazon Watch, RAN and Public Citizen wrote a letter to the three arbitration panelists: V.V. Veeder, Vaughan Lowe, Horacio Grigera Naón. The letter made several sets of requests: Open the proceeding to public, disclose how much money they have been paid, what their rates are, how much they expect to earn from the case if they decide to pursue a full hearing of the process, and their professional and personal relations with Chevron's lawyers.


The very next day, the panel wrote back to us. They're clearly feeling the heat. So we will be watching and waiting for more information.


PS – Breaking News: Taking additional steps to prevent the violation of their rights, Ecuadoran plaintiffs have filed a petition against Ecuador before the Inter-American Commission on Human Rights. They are seeking an order under Article 25 of the Commission's Rules of Procedure requiring Ecuador to:


"refrain from taking any action that would contravene, undermine, or threaten the human rights of the Afectados to life, physical integrity, and health, or their rights to a fair trial in all respects, to judicial protection, to the determination of remedies for their claims and the enforcement of any remedies so determined, and to equal protection of the law without discrimination..."


More information about this new petition to the IACHR can be found here.