Well, That Was Predictable: Chevron Peddles New Ecuador Lies Ahead of Shareholders Meeting

Yesterday, only 48 hours before its annual shareholders meeting in Houston tomorrow, Chevron showed their desperate concern about the company's liability for toxic contamination in the Ecuadorean Amazon. Chevron issued a press release full of lies and misleading statements.

Their hook? Chevron lawyers filed a long rambling letter to Ecuador's courts re-stating a litany of complaints that have already been rejected by the courts multiple times, and then listed those complaints in the press release, claiming to have "uncovered new evidence" when they had not.

The company is simply recycling one of its favorite tropes. Chevron says that Richard Cabrera, the independent court-appointed expert that reviewed, verified, and summarized the massive trial record, and wrote a report assessing damages of $27 billion, is corrupt and has colluded with the plaintiffs. In the recent past, Chevron has turned its attention away from the evidence in the trial to the trial itself, playing the victim and crying out that it hasn't received due process in one of the most litigated cases in history. 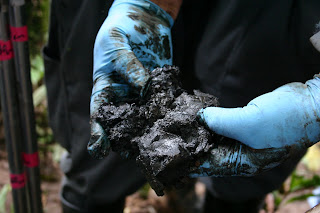 An oil-contaminated soil sample during judicial field inspections during the trail over Chevron's contamination in Ecuador.


And with that, we see what's on Chevron's mind. With community leaders from Ecuador's Amazon, campaigners from Amazon Watch and Rainforest Action Network, and a large group of our allies from around the world all gathered in Houston, it's understandable.

Chevron's management knows the evidence is stacked against them and they're afraid members of the Board of Directors may suddenly pull their heads out of the sand and see the gross negligence with which they're handling the Ecuador disaster. Or shareholders may hear the truth from the Ecuadoreans and begin asking some questions they don't want to answer.

Unfortunately, this new favorite play in Chevron's corporate playbook worked and Reuters and Dow Jones both ran stories that might as well have been written through a collaboration of Chevron's legal and public relations departments.

Both media outlets filed 'updates' later yesterday that included responses from the plaintiffs, like this from Karen Hinton, a spokesperson for the Amazon Defense Coalition which represents the plaintiffs:

"Since evidence at trial has indisputably shown Chevron is responsible for extensive contamination, the company has done everything within its power to attack the judicial process at its last hope of evading liability."

The Amazon Defense Coalition sent out their own press release yesterday to respond to Chevron's attacks. In it, they counter the lies that Chevron is peddling about what they claim to be inappropriate conduct by court expert Richard Cabrera and the plaintiffs attorneys and their experts:


During the trial, Chevron repeatedly tried to obstruct the court-appointed Cabrera from carrying out his mandate, and attacked him in the press even during the proceedings. The company had every opportunity to submit materials to Cabrera and he in fact repeatedly requested information that Chevron refused to provide. It seems that Chevron knew that a summary of the evidence – in a trial with hundreds of field inspections and thousands of soil samples – would not go well for them. So they simply made a tactical legal decision to boycott the whole process with Cabrera before it even began and then complain after the fact about it, and try to discredit the court expert's findings.

Chevron will surely continue its abhorrent pattern of deception at tomorrow's shareholders meeting. But we'll be there in force to speak truth to power and let the company know that we will continue to turn up the heat until they clean up Ecuador.