Guillermo Grefa arrived in Houston, Texas yesterday, a few days ahead of oil giant Chevron’s annual shareholders meeting. Along with another person from Ecuador, Mariana Jimenez, who we profiled on this blog last week, he is in Houston to confront Chevron for its devastating impact on his community.

The one million hectare oil concession operated by Texaco was overlaid upon the ancestral lands of five indigenous nationalities—the Cofan, Siona, Secoya, Kichwa, and Huaorani. Two nomadic groups living in voluntary isolation—the Tetetes and the Sansawari—disappeared completely after Texaco began what it dubbed “the largest civilian airlift in history” in search of the crude lying beneath Ecuador’s rainforests.

Guillermo Grefa is from the Kichwa tribe, and is a leader from a community called Rumipamba in Ecuador’s Amazon rainforest. Born in 1970, today he is a father of seven, and serves as the community coordinator and director of its school system. Grefa has long been a staunch advocate for the Kichwa people and the thousands of other indigenous peoples that have been severely affected by Chevron’s former operations. 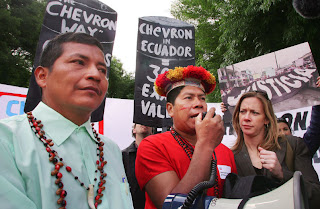 Guillermo Grefa stands at left as Humberto Piaguaje from the Secoya tribe addresses supporters at a protest in 2008. Photo by Lou Dematteis.


Rumipamba was once a paradise. A several day hike from the larger Kichwa communities that line the riverbanks of the Napo River, the area was naturally blessed with an abundance of game, fruit trees, fish, and clean water. Several Kichwa families migrated and established the Rumipamba community in the 1940s, with much of their traditions intact. Families hunted in the plentiful forests, planted the crops of their ancestors, drank and fished from the rivers of the headwaters of the mighty Amazon River.

All of that changed with Texaco’s arrival.

As Texaco began to penetrate the forest homelands of indigenous groups, Grefa recalls the company had help. In 1972, General Guillermo Rodriguez Lara put an end to the country’s democratic rule and began a seven-year period of military dictatorship, which Grefa says was a tremendous boon to the company’s drilling plans. “The military would come, threaten us, threaten to take our land if we didn’t allow the company to drill. We were persecuted by the military on Texaco’s behalf.”

Aided by the military, Texaco set up shop in the middle of the pristine rainforest region. The company arrived by helicopter, cutting seismic lines, detonating dynamite, and sinking a wildcat exploratory well known as Auca Sur 1. To transport the oil, Texaco built the Via Auca, a 60-mile road that cut a swath through Huaorani and Kichwa territory, opening up previously impenetrable forest, and bringing the oil industry to the Kichwa’s doorstep. Grefa witnessed first-hand Texaco’s drill and dump operations, and the community bore the brunt of its impacts.

“There were frequent spills, and permanent pools—lagoons really—of oil in the open air,” explains Grefa. “We didn’t know what it was, and it was everywhere. So, unfortunately, we did what kids and young people do—we played with it.”

Life for the members of his family and community began to change. Relatives became sick with unfamiliar illnesses, children were born with birth defects, animals they traditionally hunted for sustenance became scarce, and their crops failed.

The origins of the landmark environmental lawsuit against Chevron—Aguinda v. Chevron—began in Rumipamba. Maria Aguinda, the first named plaintiff in the lawsuit, is Grefa’s mother-in-law and a long time resident of Rumipamba. Today, nearly 17 years after the lawsuit was originally filed, the trial continues, while Chevron spreads lies and disinformation, and tries to shift blame for its devastating impact on Grefa’s community and others in the Amazon. 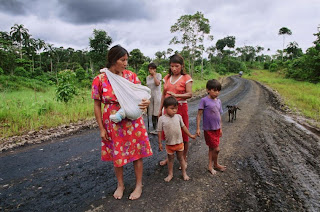 Maria Aguinda, with her family on the oil-soaked Via Auca in the village of Rumipamba in 1993. Photo by Lou Dematteis.


While much of what the Kichwa and the other Indigenous groups have lost is irreplaceable, the people of the Oriente continue to organize tirelessly for justice. Guillermo Grefa and Mariana Jimenez have traveled from deep in Ecuador’s Amazon rainforest to Houston to represent their communities, and demand that Chevron finally accept responsibility for the cultural and environmental damage it has caused.

The company has turned a deaf ear for too long but they’ll be hearing directly from Guillermo and Mariana in their Houston headquarters on Wednesday. Stay tuned for updates.