Chevron Lies Through Teeth About Groundwater Contamination In Ecuador

Reposted from the Chevron Pit.

The Ecuador indigenous and farmer communities who recently won an $18 billion judgment against Chevron have long maintained that the oil giant has been taking their comments out of context and lying in its long-running effort to discredit the lawsuit.

This week in a blog on its web site, Chevron claimed that that Dr. Ann Maest, a prominent U.S. scientist who worked as an expert for the rainforest communities, testified under oath "that she was not aware of any scientific data indicating that drinking water wells have been impacted in any way by Texpet's operations" in Ecuador.  (Texpet is a Chevron subsidiary.)

What Maest said during three days of deposition testimony was that there was extensive groundwater contamination at Chevron's production sites, but that there was no data from the plaintiffs about contamination in drinking water wells because no such wells were tested.

In her deposition, Maest repeatedly cites multiple and widespread instances of groundwater pollution at every single waste pit in Ecuador where such testing took place. Yet Chevron claims in its blog that "even the plaintiffs own scientists" agree with Chevron's fabricated theory that there is no groundwater contamination in Ecuador.

Here are some relevant excerpts from the Maest deposition that Chevron failed to mention in its blog:

"There has been some sampling of groundwater that's down gradient of pits, and they did find quite high concentrations of TPH [Total Petroleum Hydrocarbons] in groundwater." (see 1/20/11 deposition, page 133)

The plaintiffs found "elevated concentrations of total petroleum hydrocarbons and polycyclic aromatic hydrocarbons...downstream of one of the separation stations in the concession." (see 12/8/10 deposition, page 161)

Samples tested from the plaintiff's and Chevron proved that "there are also PHs [a type of oil hydrocarbon] that are high in soil and groundwater immediately under the…pits that were allegedly remediated". (see 12/8/10 deposition, page 203)

Here is how Maest answered questions from a Chevron lawyer about groundwater contamination in Ecuador at a deposition that took place on December 8, 2010 (see page 212) – an exchange Chevron ignored in its blog posting:

Q. You had no worry about finding – whether you were going to find it or not?

A. No. We knew at that time that they (the plaintiffs technical team) had found groundwater contamination.

Q. And where was that found?

A. Under pretty much every pit that they looked at.


Just in case you missed that last line: groundwater contamination was under pretty much every pit that they looked at.

So much for Chevron's claim that plaintiff's consultants agree with Chevron that there was no groundwater contamination in Ecuador.

For more on how Chevron lies to shareholders about the Ecuador litigation, see this report from securities lawyer Graham Erion and this letter from Congresswoman Jan Schakowsky (D-IL), asking the Securities and Exchange Commission to investigate the company.
Posted: Thursday, June 14, 2012 No comments:

The Canadian Face of the Biggest Lawsuit in the World

Reposted from the Chevron Pit.


The Chevron Pit spoke with Jeff Gray of Toronto's Globe & Mail yesterday about the Ecuadorians' new lawyer, Alan Lenczner. Gray wanted to know why Lenczner decided to take our case.


We told him: "Because he knows he will win, and Chevron will lose."


After an indepth review of the Ecuador and U.S. court record on the case and a trip to Ecuador to view the contamination, Lenczner joined the legal team.


"It (seeing the contamination) influenced my decision a lot. I just saw the devastation ... and I've seen the plight of these people," he said. "... Forget the noise about lawsuits and distraction and internal memos and everything else, the fact remains that this is a mess."

Countdown Begins for Chevron in Canada 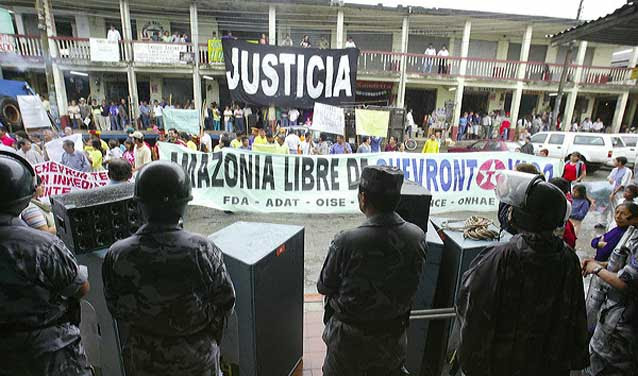 
After months of suspense, the Ecuadorian rainforest communities have finally opened up the first front in what is likely to be a worldwide legal battle to force Chevron to pay its $18 billion ruling for environmental devastation in the Amazon.


On May 30, the Ecuadorians' Canadian lawyer, Alan Lenczner, filed suit in Ontario provincial court in Toronto, asking the court to seize the company's subsidiaries, Chevron Canada Ltd. and Chevron Finance Canada Ltd. These two companies' assets include offshore oil production in Newfoundland, tar sands operations in Alberta, and a refinery and gasoline stations in British Columbia.


Here is the filing, and here is a Q&A issued by the legal team.


Lenczner, one of Canada's most prominent litigators, asked the court to appoint a receiver over Chevron's assets, which would then be sold to pay the Ecuadorian ruling.


The Ecuadorians are expected to file similar motions in other nations, seeking to add to the pressure on Chevron. Plaintiffs' attorney Pablo Fajardo has mentioned Venezuela (home to huge Chevron oil production operations) and Panama (where Chevron tankers often transit the canal) as likely targets.


The upshot is that Chevron's octopus-like worldwide presence has gone from being a strength to a critical weakness for the company. A legal sword of Damocles is swinging in the air, but where it will fall next, nobody outside the legal team knows. The company is embroiled in bitter controversies in many nations, including Australia, Angola, Brazil, Nigeria and Kazakhstan. Will one of those countries finally say "enough"?


For a summary of this rogue's gallery of misconduct, see the True Cost of Chevron report.


In the meantime, Chevron may face trouble much closer to home. On June 6th, Rep. Jan Schakowsky, D-Ill., wrote a letter to Mary Schapiro, chair of the Securities and Exchange Commission, asking her to investigate whether Chevron has concealed from the investment community the danger of its potential multi-billion-dollar liability in Ecuador.


Schakowsky referred to a recent report by Graham Erion, one of the Ecuadorians' attorneys, Chevron's Misrepresentations in Public Filings Regarding its $18.1 Billion Environmental Liability in Ecuador.

Schakowsky wrote: "Chevron may have failed, over a period of years continuing through the present time, to disclose material information to investors concerning the likelihood, scope and impact of its potential liability for massive environmental damage to a large part of the Ecuadorian rainforest and the associated health and other negative effects of that damage upon tens of thousands of indigenous farmers and individuals."


Legal nightmares in Canada and possible SEC investigations at home are part of the ever-mounting pressures facing Chevron CEO John Watson. These pressures – and the danger for company shareholders – will keep rising until Chevron owns up to its responsibility to clean up its shameful mess in Ecuador.