For decades, the indigenous and campesino communities living in Ecuador's Amazon rainforest region have suffered an epidemic of cancer, miscarriages, and premature deaths caused by oil giant Chevron's horrific contamination of their once-pristine lands.

Now, in its belligerent and well-resourced quest to evade responsibility for its toxic legacy in Ecuador, Chevron's actions pose a grave threat to a new victim that all Americans hold dear; the First Amendment of the Constitution of the United States.

Yesterday, Judge Lewis Kaplan of the U.S. District Court in New York granted a motion by Chevron to issue a subpoena to acclaimed filmmaker Joe Berlinger, demanding more than 600 hours of footage shot during the making of the award-winning documentary 'CRUDE.' The film, as many readers here know, chronicles the David vs. Goliath battle by some 30,000 Ecuadorean plaintiffs to hold Chevron accountable for widespread devastation caused by the company's deliberately substandard operations while drilling for oil over nearly four decades.

In response to the ruling, Joe Berlinger said:

"We will appeal today's unfortunate decision. The filming and production of Crude – which presents both sides of this compelling and important story – is precisely the type of investigative journalism that the First Amendment was designed to protect."

And Maura Wogan, attorney for Berlinger and his production company had this to say:

"Today's extremely broad decision will cause grave harm to journalists, investigative reporters and documentary filmmakers. The court has shown an unprecedented lack of sensitivity to the journalist's privilege and the First Amendment."

“The chilling effect of this is, someone like me, if something like this is upheld, the next whistleblower at the next corporation is going to think twice about showing me some documents if that information has to be turned over to the corporation that they’re working for.

“I’ve never had to deal with any corporation suing me to find out how I gather this information. Obviously the ramifications of this go far beyond documentary films, if corporations are allowed to pry into a reporter’s notebook or into a television station’s newsroom.”

Mr. Moore said he hoped the judge’s ruling would be overturned on appeal, and said that if it is not Mr. Berlinger should resist the subpoena “if he can.”

“I think that he’ll find that he’ll have the support of hundreds of filmmakers who will back him in this,” Mr. Moore said.

Chevron claims that a scene in one version of the film shows inappropriate collaboration between the plaintiffs' counsel and an independent court expert. Chevron lawyers used this scene as justification for wanting to sift through the rest of the footage, and see if there was "additional" misconduct captured by Berlinger.

But in a statement from Ilann Maazel, an attorney for the plaintiffs, he explains:

“Chevron’s lawyers refer to a scene where they believe a court-appointed expert attended a 'focus' group with the plaintiffs. The individual in question had not even been appointed as an expert when the scene was shot. The scene depicted a meeting — not a focus group — with Ecuadorians who live in the contaminated area, many of whom suffer from cancer, respiratory disease and other illnesses as a result of the toxins left behind by Chevron in the soil and water."

As I explained in a previous post, Chevron and its high-powered lawyers at international corporate law behemoth Gibson Dunn are hoping to mine the footage for any material that they might find useful for their relentless public relations schemes to try to malign the plaintiffs, smear their attorneys and discredit the courts in Ecuador. All the while, of course, Chevron has engaged in its own dirty tricks campaign to corrupt the trial.

In addition to a cadre of high-powered DC lobbyists and some of the largest, most expensive law firms in the world representing them, Chevron has at least six corporate public relations firms working for them, including Hill & Knowlton, which represented the tobacco industry and – as it attempted to do with tobacco and cancer – has tried to deny a link between oil contamination and cancer in Ecuador.

Of course, witnessing Chevron's increasingly hostile and dishonest tactics in its fight to avoid responsibility, it's not surprising that the oil company also works with CRC Public Relations, the DC-based firm that spearheaded the 'swiftboating' of presidential candidate John Kerry, and more recently, misleading attacks on health care reform.

Speaking about the firm, Kellyanne Conway, a Republican pollster "who has worked with CRC for years" according to the Washington Post, told the paper:

“They are among the most powerful and consequential people you’ve never heard of, and they like it that way."

So now, much like the right wing (with CRC Public Relations' expertise) smeared John Kerry with lies and introduced blatant falsehoods into the health care reform 'debate,' Chevron has amassed an ugly cabal of law firms, lobbyists, and PR spin-masters to corrupt the legal process in Ecuador, punish anyone who dares stand up against the oil giant, and spread disinformation about the company's toxic legacy in the Amazon.

I wish it was just some sort of political chess game but it never is. These things have real consequences, for people like Maria Garofalo, whose heartbreaking story is told in CRUDE. She and her husband Luiz and her daughter Silvia have all been diagnosed with cancer, after living downstream from Chevron's toxic waste pits. 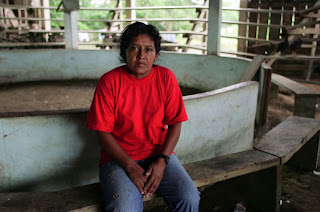 
After nearly 17 years in the courts, there is a mountain of incontrovertible evidence that Chevron (in the form of its wholly-owned subsidiary Texaco) poisoned the water and forests depended upon by tens of thousands of people in Ecuador. And so without a fact-based argument to make, Chevron has resorted to shifting the blame, sowing confusion, attacking advocates for the affected people, and crying "corruption!"

Going back to Ilann Maazel, an attorney for the Amazon communities:

“The corruption is not in some 600 hours of videotape. It’s in the ground and water of the rainforest for anyone to see and smell. Chevron's quest for the footage is just another last-minute sideshow to divert attention from the intentional dumping of billions of gallons of toxic sludge in the Amazon. Notwithstanding Chevron's smoke and mirrors campaign, at the end of the day, we believe Chevron will ultimately be held accountable for its indefensible and unconscionable conduct in the Amazon.”

The Court expresses no view as to whether the concerns of either side are supported by proof of improper political influence, corruption, or other misconduct affecting the Ecuadorian proceedings. As [Supreme Court] Justice [Louis] Brandeis once wrote, however, “sunshine is said to the best of disinfectants.” Review of Berlinger’s outtakes will contribute to the goal of seeing not only that justice is done, but that it appears to be done.

In many cases, I am all for 'sunlight' – Brandeis was presciently referring to transparency and openness in government and regulation of the financial system. But in this context, the judge is DANGEROUSLY wrong.

If the judge's ruling – which went against abundant legal precedent in the United States – is allowed to stand, it could indeed endanger the critical work of people like filmmaker Joe Berlinger, who explore under-reported issues of profound social and ecological importance. In that way, it would have the exact opposite effect from what Brandeis was suggesting.

And while the Judge is wrong, Brandeis' principle is right. While Chevron tries to muddy the waters and deceive the world as to its responsibilities for massive suffering in Ecuador, we need the efforts of journalists like Berlinger – and social justice activists, human rights lawyers, environmentalists, and supporters like you – to expose Chevron and its Chernobyl in the Amazon to the cleansing power of sunlight.

Only then will justice be done. Spread the word.

Han Shan is the coordinator of Amazon Watch's Clean Up Ecuador Campaign.