Chevron, Chevron Quite Contrary, How Does Your Garden Grow

And Wealthy Lawyers All In A Row

During the historic contamination trial against Chevron in Ecuador, the company often took journalists to its so-called "remediated" oil pits to prove that its predecessor Texaco cleaned its "share" of one of the world's worst environmental disasters, if not the worst.

Chevron's well-heeled lawyers would sometimes arrange for a nice picnic near the pits to show reporters how green its gardens had grown in the Amazon rainforest since Texaco signed a 1995 agreement with the Government of Ecuador to remediate toxic pits.

But lurking beneath the vegetation was and is pure crude mixed into the soil and underground drinking water and laced with carcinogens, such as benzene and cadmium.

Six different sets of tests have shown that Texaco only dumped dirt on top of the pits to hide the contamination, not clean it.

And, eight Ecuador judges and two U.S. judges who've heard evidence related to the 22-year-old lawsuit have either ignored the remediation agreement, thrown it out or stated it had no merit in Chevron's defense.

Ignoring the evidence, the oil giant continues to tout the agreement as its "get-out-of-jail-free" card, and U.S. reporters continue to use it in their stories as a legitimate response to the Ecuadorians' charges, while the "remediated" pits continue to leech dangerous toxins into the soil and water that indigenous peoples and rainforest villagers depend on for sustenance. 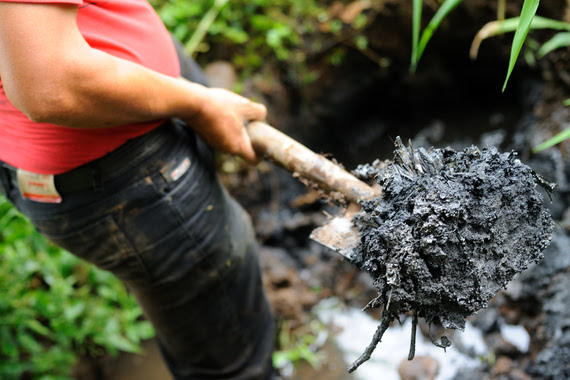 The contamination of indigenous' ancestral homelands and the disease and death left behind is unlike anything you have ever seen. And, even though Ecuador's Supreme Court has upheld the $9.5 billion judgment against the oil giant, Chevron refuses to pay, arguing the agreement released it from any liability.

So, let's look a closer look at the agreement and the remediation itself:

Travel to any of the pits that Texaco agreed to clean and dig a few feet under the ground and you will find oil.


How does Chevron explain this? With classic Chevron chutzpah.

The company maintains that in the dead of night rainforest villagers "spike" the jungle floor with oil by digging holes at the pits, pouring fresh oil into them and covering them up with dirt and vegetation so they can return the next day with a visitor to prove Chevron is lying about the remediation.

With a straight face, Chevron spokesperson James Craig peddles this outrageous story to reporters, including this Miami Herald reporter:

"...Moncayo (an Ecuadorian) plunges his auger into the ground. Within a few inches the dirt gives off the pungent odor of petroleum. Within a few feet the dirt glistens with oil residue. When a few handfuls of the soil are dropped into a bucket of water, a thick oil-slick coats the surface.

"'This is their (Chevron's) remediation effort,' Moncayo says. 'They're no better than animals.'

"The (Ecuadorians) say it's proof that Chevron lied about the cleanup and then got compliant government officials to sign-off on its shoddy work.

"Chevron spokesman...James Craig, said it's not surprising to find degraded crude at the site. It might be naturally occurring, Moncayo might have dug outside the boundaries of the remediation area, or the plaintiffs might have spiked the ground with oil (emphasis added) to discredit Chevron, he said.

"'Even if you do find hydrocarbons in the ground, it doesn't mean that they're a risk to people's health or the environment,' Craig said."

(Read similar descriptions in The Telegraph, Associated Press, Bloomberg Markets, Washington Post, NY Times and Rolling Stone, among many others.)

Craig's explanation would be hilarious if the issue of remediation wasn't so pivotal to the outcome of the litigation battle, being fought now in countries where Chevron's assets can be seized as payment for the judgment. (Chevron has few assets in Ecuador.)

For the most part, Chevron doesn't dispute the contamination. One of its local lawyers, Rodrigo Perez Pallares, even admitted the company dumped 15 billion gallons of toxic waste into waterways.

In addition to intentionally dumping toxic water into streams, Texaco (Chevron bought Texaco in 2001) also built over 900 huge, unlined waste pits to permanently store pure crude oil and wastewater laced with carcinogens that are a byproduct of the drilling process.

Instead Chevron's army of lawyers argues that Texaco cut a deal with the Government of Ecuador to clean a small percentage (162 of 900 or so) of the oil pits in exchange for immunity from future lawsuits.

Yet even upon cursory examination, Chevron's so-called "release" is not even close to what the company claims.

The agreement, negotiated after the Ecuadorians filed their original lawsuit in the U.S. in 1993, released Texaco only against government claims of contamination. It expressly carved out any claims held by individuals, such as the Ecuadorians'. A Memorandum of Understanding between Texaco and Ecuador's government, signed in 1994, stated clearly that third-party private claims should not be "prejudiced" by the agreement.

From 1995 to 1998, Texaco conducted its fake cleanup – or cover-up, if you will. During the same time, Texaco's lawyers waved the remediation agreement in front of the U.S. federal court, hearing the contamination case in New York. But the American judge took no note of it, given that not even Texaco argued at the time that it trumped the claims of private citizens that were pending against the company in the lawsuit.

Later, another federal judge also caught onto Chevron's subterfuge, in a related arbitral proceeding that ended up in U.S. federal court.

U.S. Judge Leonard Sand analyzed the "release" agreement and, for all practical purposes, said it had nothing to do with the Ecuadorians' claims.

"...it would be extremely difficult for [Chevron] to establish that claims nominally brought by third parties in the Lago Agrio litigation were covered by the 1995 and 1998 Agreements between Texaco and Ecuador: it is highly unlikely that a settlement entered into while (the case) was pending would have neglected to mention the third-party claims being contemporaneously made ... if it had been intended to release those claims or to create an obligation to indemnify against them." (Republic of Ecuador v. ChevronTexaco Corp., 376 F. Supp. 2d 334, 374 (S.D.N.Y. 2005).

Fearful that Judge Sand would expose the release agreement for what it was, Chevron simply pulled its lawsuit back and ended the case.

While Chevron ran for the hills to avoid Judge Sand, it convinced federal Judge Jed Rakoff that the underlying claims case should be tried in Ecuador rather than in the U.S. To get the case transferred to Ecuador, the company filed no fewer than 14 sworn affidavits praising Ecuador's judicial system as "independent" and "fair". In 2003, per Chevron's request and Judge Rakoff's order, the villagers re-filed their lawsuit in Ecuador.

By 2013, after an arduous trial that produced 105 expert reports documenting Chevron's pollution, three layers of Ecuador's courts – trial, appellate, and Supreme Court – had ruled against the company. No fewer than eight appellate judges held Chevron responsible for the contamination and ruled that the 1995 remediation agreement did not apply to the private claims in the case and thus was without merit as a defense.

Even though Chevron had previously promised Judge Rakoff and three U.S. appellate judges that it would accept Ecuador's jurisdiction and abide by its court decisions in exchange for moving the case to Ecuador, Chevron has refused to pay and continues to argue in any court that will hear its complaints that the remediation agreement frees it from all responsibility for the damage it caused.

But, if that's really the case, why doesn't the remediation agreement have words to that effect? Or have the signatures of the villagers who brought the case? Even if a court ruled that the agreement released the claims (none has), the problem with the remediation itself remains. Why?


At best, it was terribly inadequate. At worst, it never happened. In either event, it was a sham.

Most likely, Texaco's contractor dumped dirt over the pits to cover up the oil and called it a day. Over time, some vegetation grew on top of the dirt and that's why Chevron began having picnics to show reporters how green its gardens grew.

Which brings us back to Chevron's James Craig and the band of merry Ecuadorians digging holes under full moons in the jungle to "sabotage" Texaco's so-called remediation.

Six different field tests taken by different parties, including those taken by Chevron, prove the remediation was a fraud. The so-called "cleaned" pits are just as contaminated as those not cleaned. See here for information about the field tests described below.

1) Chevron's own tests taken at Texaco's remediated well sites show illegal levels of total petroleum hydrocarbons (TPH). For example, Chevron found 13,000 parts per million (ppm) of TPH levels at the oil well site, known as Shushufindi 48. Ecuador requires the TPH level to be below 1,000 ppm; the average U.S. standard is even lower, at 100 ppm.

2) Chevron also took additional tests in March 2009, as the trial was coming to a close. Chevron's expert Marcelo Munoz tested eight purportedly "remediated" sites and found illegal levels of contamination at two. Chevron refused to pay Munoz for his report, even though the oil company requested that he conduct the tests.

3) In 2003, five years after the fake cleanup, Ecuador government auditors reported they had discovered pits oozing with oil and concluded the government had "erred in certifying" the cleanup. "Texaco has caused irreversible damage," stated a report by the General Controller, a government agency that audits public contracts. "The environmental remediation and repair agreement goes against the country's interest." The auditors' tests found that over 85% of pits tested had toxic levels higher than 1,000 ppm of TPH. They also found oil seeping out of 41 "remediated" Texaco waste pits and said 59 pits had been left uncovered.

4) In 2009, an Ecuador prosecutor ordered yet another series of tests. Of the 20 tests conducted at nine sites, 16 returned with toxic levels higher than the Ecuadorian standard of 1,000 ppm, and of those, 13 had levels higher than 5,000 ppm.

5) The Ecuadorians also did a series of tests at the "remediated" pits and found TPH levels higher than 30,000 ppm.

6) And, in 2013, a U.S. environmental engineering firm, The Louis Berger Group, did additional tests for the Government of Ecuador and found, once again, high levels of contamination. The American company also reviewed the work of Chevron's experts at the so-called remediated sites and found numerous flaws and incorrect conclusions. See pages 35 to 42.

All of this evidence adds up to one thing: Texaco committed fraud against the Ecuador government. And Chevron has done the same by lying about the remediation to Ecuador and U.S. courts.