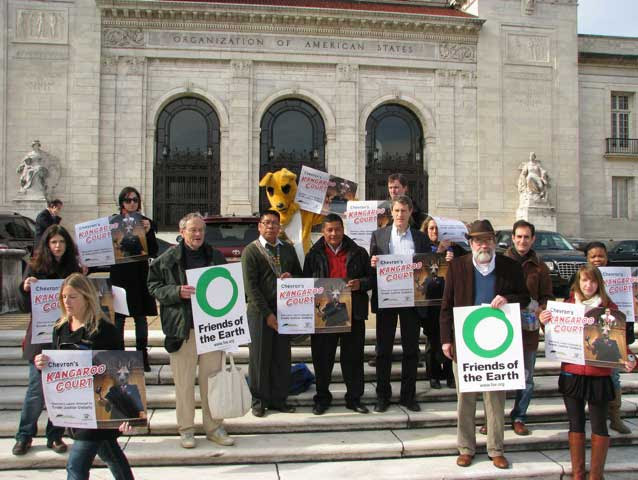 So what do you do if you're a massive corporate criminal that has lost in local and national courts and the court of public opinion, been rejected by the U.S. Supreme court, had your assets seized and frozen abroad, and stand teetering on the brink of losing several other suits costing you billions of dollars in assets after decades of telling your shareholders you have ZERO risk in the matter?


Well, if you're Chevron you try to weasel your way out any way you can and look to anyone – no matter how removed from the matter – to declare you're the victim rather than the perpetrator. In this particular case, as we wrote about last year, Chevron has found an obscure private arbitration panel, acting under the mantle of the U.S.-Ecuador Bilateral Investment Treaty, in an attempt to circumvent justice in Ecuador and threaten that country into interfering in the Lago Agrio case. This weak effort hasn't stopped efforts in Canada and Argentina and despite Chevron's hopes, will not be their "get out of jail free" card. Rather, it has served to shine a light on this process of how non-transparent, unaccountable investor-state arbitration dispute resolution systems are being employed to undermine fundamental human rights. Watch this video just released by Friends of the Earth U.S. to learn more.


To be clear, the tribunal or "Kangaroo Court" exists only to facilitate commercial dispute resolution across international borders in a way that promotes economic development and consistency in the law. But they have no legal authority to decide major questions of international law. A point solidified by the fact that the panel rejected Chevron's key request – that the Ecuador judgment be declared unenforceable as a matter of international law.


Today's "award" means the panel members think they have the outrageous power to override decisions of any public court system of any sovereign nation. Add to that the fact that at no point did they even meet with nor consider evidence from the actual plaintiffs, indigenous and campesino communities, in the case. In fact, it's amazing that it took an entire year for them to "issue an award" since there's no indication they actually sought to truly investigate the case. It appears the panel members did get paid very well during that time, yet they refuse to disclose how much and by whom.


Ecuador has already responded that it is legally unable to comply with recent orders from the panel on the grounds they flagrantly violate international law and are not authorized by the U.S.–Ecuador Bilateral Investment Treaty. The panel's decision is therefore unenforceable as a matter of law and practice.


Rejected again. What will Chevron try next? Change their phone number and pull the drapes?