Chevron Can Solve Its Argentina Problem: Pay the Judgment

Chevron's head of operations in Argentina has complained to the Ecuadorians, who recently won a $19 billion judgment against the company for massive oil contamination, that future exploration and drilling is threatened in Argentina because of a local court's decision to freeze its assets.

Efe News Service quoted Miguel Galluccio, Chevron's guy in the South American country, warning that the freeze resulting directly from Chevron's refusal to pay the Ecuador judgment "is absolutely detrimental to Argentina and could have a negative effect on investment."

Ok, Miguel, then convince your company to pay the judgment. You've got the money. It's that simple. Problem solved.

This Huffington Post blog is the stuff of spy novels and would be hard to believe if it all hadn't been so well-documented.

In the blog, Karen Hinton offers up a compilation of some of the dirty tricks played by Chevron's private investigative firms that have been hired to discredit the $19 billion judgment against the company for oil contamination.

The Chevron Corporation has spied and – perhaps is still spying – on the Republic of Ecuador, fueling a fierce battle between the oil giant and President Rafael Correa, who is calling on other South American countries to hold Chevron accountable for the world's largest oil-related disaster in the Ecuadorian rainforest.

Fearing the loss of an historic, long-running environmental lawsuit in the Ecuadorian rainforest in 2009, Chevron secretly videotaped the judge hearing the case – with a spy pen and spy watch – in an effort to derail the trial by entrapping him, government officials and indigenous community leaders in a faked bribery scandal.

It goes without saying that if Chevron had been caught trying to secretly videotape a U.S. judge, it would be facing criminal charges.

Not surprisingly, the Securities and Exchange Commission has rubber stamped Chevron's request to remove a shareholder resolution from consideration at its annual shareholders meeting that would have stripped John Watson of his Chairman's title and responsibilities. Watson currently is the CEO and Chairman.

A growing number of shareholders are concerned about the way Chevron is handling the $19 billion Ecuador judgment for massive oil contamination facing the company and have proposed a resolution to hold top executives more accountable by splitting the role of Chair and CEO, as many other companies have done. Last year, a similar resolution won the support of 38 percent of Chevron shareholders.

Today, though, the SEC big footed Chevron's request, depriving shareholders an opportunity to vote on the resolution again. The move is in keeping with SEC's weak oversight of corporate America in general and an attempt to silence shareholders.

It will, however, take more than the SEC to silence these shareholders, some of whom have been subpoenaed by Chevron in its desperate legal attacks in the U.S. to stop enforcement of the judgment.

Two other resolutions will be voted on by shareholders: one to appoint an environmental expert to the board and the other to explain why Chevron has subpoenaed several shareholder groups, including Trillium Asset Management, along with several dozenenvironmentalists, law students and summer interns.

Expect to see shareholders out in full force at the May 29th meeting without the resolution, but resolute to hold Chevron accountable for its environmental crimes.

Chevron Boxes Itself In With SEC Move

Chevron's decision to ask the SEC to allow it to dropkick shareholder resolutions calling for the duties of Chairman and CEO to be split – essentially demoting current Chair and CEO John Watson – has boxed the oil giant into a public relations defeat.

It's a  lose-lose proposition for the multi-national corporation.

The shareholders are concerned about the way Watson and other Chevron executives have handled the $19 billion judgment against the company for massive oil contamination in the Ecuadorian rainforest. Watson and his 2,000 lawyers and legal assistants are spending hundreds of millions of dollars working on a legal attack to stop enforcement of the judgment.

The contamination is obvious. Everyone agrees Chevron's predecessor Texaco put it there. The people suffering are impoverished indigenous tribes and farmers who brought the original lawsuit 20 years ago. As the years have passed, Chevron has suffered from negative publicity casting it as an oil company concerned only about profits.

A growing number of shareholders are saying enough is enough.

Instead of finding a way out of the environmental nightmare, Chevron digs itself deeper into a hole with its SEC request to trounce on its shareholders, by nixing their resolutions and even subpoenaing them in its legal battles.

David Baker in today's San Francisco Chronicle describes the situation, and it's clear from his article that if the SEC rules in Chevron's favor, it will make the company look like the corporate thug that it is. Plus, it won't stop the shareholders from protesting at their annual meeting.

And, if the SEC doesn't, then the shareholders can once again introduce their resolutions and, likely, increase their vote tally, as they have done year after year. 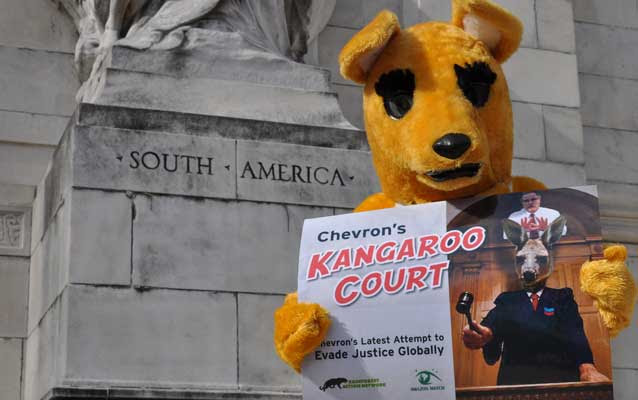 President Rafael Correa is no stranger to hyperbole, but his recent comments about Chevron's private corporate arbitration panel were right on the mark:

"It's the end of sovereignty, the end of our independence; we have become colonies with these rulings from international courts."

There has been a growing trend of transnational corporations capitalizing on investment treaties to subvert the sovereignty of the countries in which they operate. The Transnational Institute recently documented that a small circle of corporate lawyers that some refer to as an "inner mafia" – just 15 lawyers have decided 55% of all disputes – receive up to $1,000 per hour per lawyer to sit on the panels.

Over the last 15 years these arbitrations have increased more than tenfold with 38 in 1996 and 450 in 2011. In over a third of those cases corporations have sued countries for over $100 million. Some of these arbiters are former board members of multinational corporations that have sued developing nations. They are agents of what writer Naomi Klein has dubbed "disaster capitalism," targeting countries in the Global South and capitalizing on nations in the midst of crisis. They sue governments when corporations believe that governments have treated them unfairly by adopting environmental protections or public health laws.

However, the Chevron panel is going even further and taking the unprecedented step of trying to use an investment treaty to nullify the ruling of a sovereign domestic court that Chevron delayed for years. What makes the attempt even more shameless is that Ecuador was not even party to the 19-year court case; the plaintiffs were the 30,000 indigenous and campesino people who are still suffering from the toxic consequences of Chevron's contamination in the Amazon.

Chevron is asking the panel to demand that Ecuador pays the $19 billion judgment as a punishment for not ruling in Chevron's favor. As an earlier Amazon Watch publication noted, "one of the wealthiest corporations on the planet with revenues of $240 billion in 2011 is seeking a taxpayer-funded bailout in Ecuador where the per capita income is $4,000 per annum. In other words, it wants the victims of its contamination to pay for the clean-up of their ancestral lands – sort of like executing someone before a firing squad and sending their family an invoice for the bullets."

Chevron's corporate overreach is about more than just this case. If Chevron is able to use a secretive corporate panel to overturn a seminal ruling in another country, it will subvert the sovereignty of justice systems around the world, rendering them powerless in the face of truly unlimited corporate power.

Chevron is facing diplomatic pressure over this unprecendented move. The Bolivarian Alliance for the Americas (ALBA), a regional diplomatic body started by Venezuela, has come to Ecuador's defense. Venezuela, which holds billions of dollars of Chevron's assets, has called for a regional meeting to address Chevron's "aggression" against Ecuador.

The panel is Chevron's last-ditch effort at the end of a 20-year losing game. Chevron fought for years to move the case from the U.S. to Ecuador in hopes that it could buy justice from what was then an extremely "pro-US business" administration. It even filed 14 sworn affidavits in U.S. court "praising the fairness of the Ecuadorian judicial system" and promising to abide by its eventual ruling. After losing an eight-year court battle in Ecuador it's scrambling for a Hail Mary. It's even tried a similar stunt before and failed: in 2004 Chevron sued Ecuador to demand that the country indemnity the company. The claim was moved to U.S. Federal Court, where it was quickly rejected. Chevron's playing dirty with the corporate arbiters, showing the world how truly desperate it is.

Update: Chevron is more desperate than we thought. New court filings show that Chevron is bankrolling over 2,000 lawyers and legal professionals in an attempt to steal justice from the 30,000 indigenous and campesino plaintiffs. In the past thirty days Chevron has served the Ecuadorians and their legal team with more than 10,000 pages of motions, letters, notices, and briefs. Amazon Watch is amongst those targeted as we've had to spend countless hours working with our legal defense team at Earth Rights International to defend ourselves against outrageous demands to turn over tens of thousands of internal documents.

Chevron spent $400 million just this year in an attempt to evade the Ecuador judgment and has spent close to $2 billion dollars on the case. I can't imagine that Chevron's shareholders are too happy about these revelations...