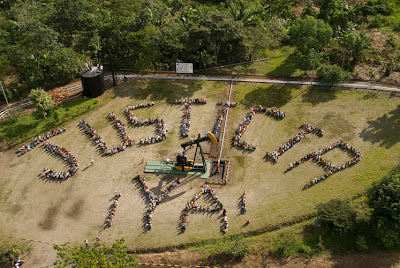 (This is part two of a two piece editorial from the LA Times on the Chevron Ecuador Case. Some of the best and profound writing I've read on ChevronTexaco's mentality towards indigenous communities they have operated in.) From LA Times Aug 29 2009

Intertwined with the lawsuit are the indignities suffered by Ecuador's native peoples.

The facts of Aguinda vs. Texaco Inc. haven't changed since the lawsuit was first filed in 1993, but the world has. Climate change and environmental stewardship have become international concerns. The dignity of native populations around the world has been recognized in a Declaration on the Rights of Indigenous Peoples adopted by the United Nations. And after 16 years of litigation in the United States and, now, Ecuador, the lawsuit against Chevron Corp. has become a cause celebre among human rights activists and environmentalists. Last year, the plaintiffs' lead attorney and a community organizer on the case won the Goldman Environmental Prize, the world's leading environmental award.

As the world has changed, so has Ecuador. When Texaco began drilling in Ecuador's Amazon rain forest, the country was run by a military dictatorship, and American oilmen were at the top of the power structure and social order. As recently as 2006, attorneys for Chevron -- which inherited the case in a merger with Texaco -- would arrive for court business in Lago Agrio escorted by uniformed army soldiers. Plaintiffs' attorneys were unaccompanied.

At the very bottom of society were Indians. In the caste system that had endured in Ecuador since the Spanish conquest, those of European extraction and their foreign allies dominated the nation's affairs, and it was the ruling class in the capital of Quito that grew wealthy from the oil discovered in the Indians' homelands. About $25 billion worth was extracted by the consortium that included Texaco, and Chevron officials claim that 95% of the revenue, or $24.5 billion after taxes and royalties, went to the government. Yet the region that was the source of the nation's wealth remained its most impoverished. If the rain forest was ravaged and the people harmed, it was with the consent of their own government.

The country began to change in the 1990s, however, and its socialist evolution was made manifest with the 2006 election of Rafael Correa, a U.S.-educated economist who speaks French, English and Quechua, an indigenous tongue. He has called the devastation of the Amazon a "crime against humanity" and clearly supports the plaintiffs in the case against Chevron.

Among many changes made under Correa's administration, Ecuador has extended greater respect and protections for indigenous cultures and has given Pachamama -- Mother Earth -- legal standing. Last year, voters approved a new constitution that grants nature the right to "exist, persist, maintain and regenerate its vital cycles, structure, functions and its processes in evolution."

There is no legal equivalent in the world. And though the new constitution does not apply retroactively to the lawsuit, the assumptions behind it reveal the depth of the culture clash between San Ramon-based Chevron and the people suing it. Five indigenous tribes and 80 communities -- about 30,000 inhabitants of the Amazon -- allege that Texaco polluted their land and their only sources of water, resulting in chronic and even fatal illnesses.

Reeling from a court-appointed expert's findings of soil and water contamination and his determination that damages could soar to $27 billion, Chevron has launched a vigorous public relations campaign, averring that it is pitted against an interfering socialist government and not impoverished locals. The company has tried to its limit public discussion of the trial to the specific sites that Texaco remediated under an agreement with the government, while the plaintiffs insist on discussing the entire concession area and the personal suffering of its inhabitants.

Yet if Chevron maintains that the playing field has tilted to the left, the plaintiffs see it as finally level. They have waged an equally vigorous campaign, perfecting a "toxic tour" and guiding international observers, environmental activists and journalists -- including a member of The Times' editorial board -- to contaminated sites.

The main issues in the suit are matters of dueling science. But the trial's location in the Amazon provides a context and backdrop that would have figured less prominently had the case been tried elsewhere. Still seething in the jungle is an enduring resentment of what many residents say was Texaco's paternalism and arrogance, a sense of imperialist exploitation no less offensive because it was the work of a corporation rather than a government.

Indians still living in the rain forest recount the casual crimes of the American oilmen, with their abundance of swagger and contempt for local culture. From house to house, town to town and tribe to tribe, it is the same: The oilmen mocked and shamed them and raped more than just their lands.

"Before Texaco came, the women did not have children who were half-white," said a Secoya woman. "But what could they do? The women were given no choice."

Tribal elders recall how Texaco's pilots would swoop down on them in their helicopters. Sometimes, the elders say, they would carry off Indian women or, apparently for the fun of it, fly men and boys deep into the jungle and strand them miles from home without food or water.

Those allegations are, in one sense, tangential to the lawsuit. But some accounts of wrongdoing have spilled from the margins of the case intothe litigation itself. The assessment of damages by the court-appointed expert, for instance, cites tales of rapes and miscarriages, which could influence the size of any judgment against the company.

"This notion that accusations can be made without any sort of substance behind them and that they stick is extremely worrisome," Chevron spokesman Kent Robertson said in an interview with The Times.

This shadow case has been particularly difficult to counter. When Chevron is accused of assaults and rapes and even cultural genocide, how, exactly, is it supposed to respond? In accordance with U.S. mores and procedures, it wants documentation -- police reports, doctors' examinations -- not oral histories corroborated solely by friends and family.

"Do I think murders were committed back in that region in the 1970s? Perhaps -- it's plausible," said James Craig, another Chevron spokesman. "But where are the evidence and the witnesses? Where were the police? If you're going to make these types of accusations, you should back them up with something. I wasn't in Ecuador in the 1970s to say yes it happened or didn't happen. But if a criminal act occurs in an area, is that an indication that this is the company's practice? Or is it just a criminal act that would occur?"

To Chevron's frustration, many in Ecuador draw no such distinction. They consider the crimes of that era to be the responsibility of the oil company that occupied their land, and they haven't forgotten.

However the case is resolved, an environmental victory is impossible. No amount of money will restore the rain forest to its natural state, and the foundation of an ancient culture has all but vanished.

Indians still living on the banks of the Aguarico, the Richwater, recall the old way of hunting: A shaman would enter a dream state, then he would ask the animals to sacrifice themselves for the tribe. The animals never refused. In the Ecuadorean Amazon, that way of life endured for 500 years, withstanding conquests by the Incas, Spanish colonizers and American missionaries. Then Texaco arrived, and oil extraction did what centuries of outside intrusion could not.

Secoya Indians living in the village of San Pablo remember the day the river ran black. Old men tell of oil rushing down the waters, engulfing everything in its path and staining the banks. Then came the dead fish, floating on the surface. The people, however, continued to eat the fish, bathe in the water and use it for their cooking. They didn't know any better.

Now they do. A generation of Indians has experienced a constant struggle with sickness and hunger their forefathers never could have imagined. With their forests and rivers depleted, a handful of indigenous communities struggle simply to survive. Instead of fish and game, meals now are more likely to consist of potatoes, rice and canned sardines bought at stores hours away from their villages. That devastation, more than soil samples and toxicity reports, animates the historic lawsuit now nearing its conclusion.

When the verdict is issued in Lago Agrio, it will prompt a round of appeals and other legal procedures, possibly in Ecuador and certainly in the United States, where Chevron has assets. The plaintiffs promise they will never give up. The company has assured investors that it will never pay. And the Amazon and its people will remain unhealed.

This is the second of two editorials on the case of Aguinda vs. Texaco Inc. Both are available at latimes.com/chevron.

Your bio goes in here...