Coming to theaters: the film Chevron doesn't want the world to see.

Three weeks from today, a powerful new documentary film called CRUDE is opening in New York. It premiered at Sundance and has played at (and won awards at) numerous film festivals around the world. But now it's coming to theaters across the country, beginning with the Big Apple.

Three years in the making by acclaimed filmmaker Joe Berlinger (Brother's Keeper, Paradise Lost, and Metallica: Some Kind of Monster), CRUDE chronicles the epic battle to hold oil giant Chevron accountable for its systematic contamination of the Ecuadorian Amazon – an environmental tragedy experts call the “Amazon Chernobyl,” and believe is the worst case of oil-related contamination on Earth.

Centering on a landmark lawsuit filed by the indigenous people and campesinos who continue to suffer a severe public health crisis caused by Chevron's contamination, CRUDE is a high-stakes David vs. Goliath legal drama with 30,000 Amazon rainforest dwellers facing down the 5th largest corporation in the world.

Amazon Watch's Clean Up Ecuador Campaign – featured in the film – is leading grassroots efforts to promote the theatrical release, enlisting human rights and environmental allies across the U.S. in an outreach and word-of-mouth marketing campaign. Numerous organizations have pledged support and committed to concrete efforts to build the profile of this must-see film, including Rainforest Action Network, Oxfam USA, WITNESS, EarthRights International, Human Rights Watch, and Global Green, to name just a few.

CRUDE is not a simplistic piece of agit-prop. Filmmaker Joe Berlinger shows all sides of this monumental case and the stories and people behind it. Chevron is given plenty of opportunity to share its perspective. Unfortunately for them, in the end, truth does appear to pick a side and it's not Chevron's.

Ultimately, the film gives us a glimpse of the beauty and mystery of the Amazon and its indigenous cultures, and puts a human face on the devastation left there by three decades of oil operations. But it does a lot more. Among other things, it also tells the story of what it takes to go up against one of the most powerful companies on the planet.

Watch the trailer below:

Especially inspiring is the story of Pablo Fajardo, the young former oil field worker who completed his law degree by correspondence course and is now the lead attorney for the plaintiffs. Pablo argues passionately and courageously for the impacted communities, and you won't be able to help cheering him on.

Advising Pablo is another lawyer named Steven Donziger, who helped file the original lawsuit in New York back in 1993. Coming across as somehow both cynical and idealistic, he is brash and and big and loud and manipulative. And if you're rooting for the plaintiffs, you'll find yourself thinking "I'm glad he's on our side."

And there are a slew of other fascinating real-life characters, from a Chevron attorney who comes across like the Tilda Swinton character from Michael Clayton (how does she sleep at night?) to Trudie Styler – wife of Sting and founder with him of the Rainforest Foundation – who visits the affected communities and decides to get involved.

It's easy to get behind CRUDE because it not only tells an important story. It tells it in an inspiring, powerful, engaging, and dare I say it, extremely entertaining way. Joe Berlinger had a hit with his last film about Metallica going through group therapy. He brings the same storytelling acumen to this story that already had dramatic elements galore.

The theatrical release of CRUDE comes at a moment of unprecedented importance in the campaign to hold Chevron accountable and achieve justice for the people of the Ecuadorian Amazon. What's more, a victory for this grassroots campaign will send shockwaves through the oil industry and corporate boardrooms around the world, forever changing the way companies do business. 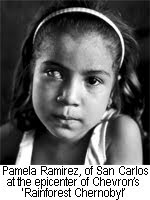 The film opens in New York on 09/09/09, followed by runs in Los Angeles, San Francisco, and thirty more smaller cities across the country [full list]. This sounds great but think of it compared to G.I. Joe, which was playing in 4,000 theaters at the same time last week! Theaters nationwide will be watching to see how the film performs in the first few weeks to decide whether to screen it themselves so please, help us spread the word!

Visit www.ChevronToxico.com/crude for resources to help you promote CRUDE and get involved with the Clean Up Ecuador Campaign. Join us now so you can join us for the campaign's victory party in the near future!

PS the official film website is at: www.crudethemovie.com. Check it out for the film's press kit, and to sign up for updates from the filmmaker.

Han Shan is a New York-based human rights and environmental justice campaigner. He is currently serving as a coordinator of the Clean Up Ecuador campaign for Amazon Watch. Han served as the WTO Action Coordinator for the Ruckus Society in the lead-up to the historic 1999 demonstrations against the WTO in Seattle, and then served as Program Director, training thousands of grassroots activists in effective nonviolent action. The Washington Post called Han "one of the most visible figures of the protests against the WTO, World Bank and IMF." Han has also played a leadership role in the Tibetan freedom movement for over ten years, and is a producer for the independent production company Rikshaw Films, creating award-winning documentary films and issue-driven content for television and the web.