Protest Chevon's Crimes In Their Own Backyard 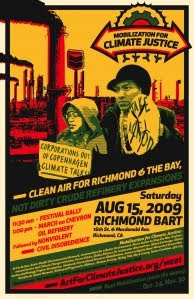 Join allies in the fight to clean up Chevron’s dirty operations world-wide. Please come with us this Saturday as we take this message to the gates of Chevron’s Refinery in Richmond CA!

We are turning up the “Street Heat”

As described in "The True Cost of Chevron", instead of cleaning up their messes, reducing oil production and shifting to sustainable industries, Chevron and other Big Oil corporations are expanding their refineries, pipelines and extraction projects. Richmond and Bay Area environmental and climate justice groups are leading a precedent-setting fight against this expansion. A fierce, local grassroots campaign has been fighting Chevron’s strategies to expand their Richmond refinery.

Join the growing alliance of groups and people creating “street heat” for climate justice in the lead up to the December 2009 Copenhagen Climate Talks.

For more information on the mobilization and the events happening after Saturday's festival visit west.actforclimatejustice.org