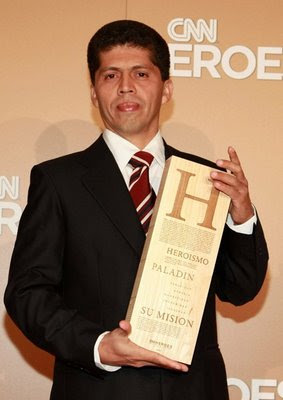 Pablo Fajardo found his calling at age 15. That’s when the Ecuadorean teen moved with his family to a poor community in the northern Amazon region that was the site of a Texaco oil plant. “Whatever step you took, walking around the jungle, you would actually get soiled with oil,” Fajardo said Wednesday at the University of Oregon School of Law. Troubled by the impact of oil industry contamination on his Lago Agrio region, Fajardo at 18 led a local group seeking cleanup and reparations. He became an attorney and at 35 assumed the role of lead counsel in a David vs. Goliath lawsuit against Chevron, which acquired Texaco in 2001. Last year, Fajardo won the U.S.-based Goldman Prize for serving as the public voice for 30,000 Ecuadoreans who filed a class-action lawsuit against Texaco in 1994. According to their claim, still alive in the Ecuadorean courts after its 2003 removal from a New York U.S. District Court, Texaco dumped nearly 17 million gallons of crude oil and 20 billion gallons of drilling wastewater directly into the Ecuadorean Amazon. The claim says area residents, among the poorest people in Ecuador, have suffered disproportionate rates of miscarriages, leukemia and other cancers resulting from oil-related soil and water contamination.

Chevron spokesman Kent Robertson on Wednesday disputed that claim, saying Fajardo’s group has never documented higher-than-average health problems or hard evidence linking such problems to Texaco’s operations there. Further, Robertson said, Texaco collaborated with PetroEcuador, Ecuador’s state-run petroleum industry, to extract oil from the region, with the U.S.-based corporation a 37 percent partner in the venture. After ceasing its operations in 1990, the company spent $40 million remediating its share of the environmental damage to the satisfaction of the Ecuadorean government, he said. Fajardo’s group “wants Chevron to pay to clean up PetroEcuador’s mess,” Robertson said. According to the Goldman Environmental Fund, an independent investigator appointed by an Ecuadorean judge concluded that oil operations caused $8.3 billion to $16 billion in area environmental damage. Fajardo on Wednesday presented a video showing how polluted water and toxic sludge has left subsistence farmers unable to grow crops. One clip showed a farmer chopping into the earth with a hoe and turning up what looked like thick, rubbery asphalt. Eugene lawyer Bern Johnson, executive director of the Eugene-based Environmental Law Alliance Worldwide, introduced Fajardo as a voice for “the kind of communities that have paid a very high price for the industrialized world’s addiction to oil.” Fajardo, at the UO this summer on a 10-week fellowship to study English, said the 15-year-old lawsuit has been frustrating. “Legal systems are very imperfect and usually tend to favor those in power,” he said. “For me, it’s ludicrous that we spent nine years in the New York Circuit Court just arguing whether that was the correct place to be holding the proceedings.” He also challenged the “hard science” proof of harm standard. “They look at individual cases of cancer and say it can not be traced back to the oil that was spilled by Chevron,” he said. “It’s true that the exact correlation cannot be proved. But hard science is inhuman, because the principle of precaution should rule in this case. This is to say that populations should not be exposed if the risk has not been proved harmless to the population.” He lamented what he called Chevron’s unjust “double standard” of laxer environmental restrictions in places such as Ecuador as opposed to operations in the United States. But he pledged to continue the suit, urging sympathetic Oregon residents to educate themselves on the topic. “We are quite firm that we are going to carry on,” he said. “One of the many things we’ve learned … is that these battles need much more collective actions, for people from the north and the south to come together in the fight. Environmental problems do not really have borders; therefore, the solutions to them should not have borders.”