If you can't win the argument, change the subject.

That seems to be oil giant Chevron's strategy, as it battles a lawsuit for massive contamination of the Ecuadorian Amazon.  After 16 years in litigation, a monumental environmental lawsuit by 30,000 indigenous people and campesinos against Chevron appears to be drawing to a close. The oil company has publicly said that it expects to be found liable for up to $27 billion in damages for what has become known as the 'Amazon Chernobyl.' And in less than a week, a high-profile documentary film about the case- acclaimed filmmaker Joe Berlinger's CRUDE- comes out in U.S theaters.

And so, time to change the subject. Ready for Chevron's 'September Surprise?'

On Monday, Chevron breathlessly declared that it had video footage implicating the judge presiding over the trial in a "$3 million bribery scheme."

The company instead revealed videos showing a former Chevron contractor named Diego Borja and an American businessman named Wayne Hansen, who appear to be trying fruitlessly to entrap the presiding Judge, Juan Nuñez. Borja and Hansen secretly shot the videos themselves using a spy-camera pen and watch they bought in a catalog.

As The San Francisco Chronicle reports:

The closest the conversation comes to the suggestion of bribery happens when Hansen at one point abruptly asks the judge, "Do you want part of, of my contract?" The judge responds, "I don't have anything to do with that." Then Hansen appears to correct himself, and says he's talking about money that would go to the government, not the judge. Borja and Hansen also ask him several times whether he will rule against Chevron, and he repeatedly tells them they must wait for the verdict to find out. These excerpts are from Chevron's transcript. Hansen: They've been the guilty party for more than many years, right? Nuñez: You'll see that, sir. What you want to find out is whether it's going to be guilty or not, I'm telling you that I can't tell you that, I'm a judge, and I have to tell you in the ruling, not right now.

But as Nuñez prepares to leave the meeting, Hansen asks him again. Hansen: Oh, no, I, I know clearly how it is, you say, Chevron is the guilty party. Nuñez: Yes, sir.

Except that if you watch the video, Hansen's tortured Spanish statement about Chevron being el culpable - the guilty party- comes as people are shuffling papers and preparing to leave the room. It's not at all clear who the judge is answering or speaking affirmatively to. You can't see the judge when you hear his muffled "yes, sir" and one gets the sense that he's just trying to finish up this meeting that he apparently attended as a favor to an acquaintance.

And that's Chevron's smoking gun -- the judge's single, hardly intelligible, and un-directed "yes, sir" at the end of a meeting at which he has repeatedly said that he cannot predict his verdict.

As the oil giant's PR flacks and executives worked up a sweat fanning the flames of its contrived controversy, the judge defended himself to the Associated Press:

"Never, never, never have I said that it will go against" Chevron, the judge said. "They asked me if a sentence would come out. I said, 'Yes sir, a sentence will come out.' For or against? I have never said anything."

The "bribery plot" Chevron trumpets in its press release has nothing to do with the judge or the court, and instead centers around a separate meeting at which the former Chevron contractor and American businessman discuss payments to a single, excitable man who claims to be connected to Ecuador's ruling party, for access to government contracts for remediation of Chevron's contamination.

In fact, the whole episode raises more troubling questions about Chevron than about the judge or Ecuador's judicial process that the company has spent so much time impugning.   Chevron denies it had anything to do with soliciting or supporting the apparent sting operation by the former logistics contractor for the company. But Chevron executives have had the video since June, and didn't notify any Ecuadorian or American authorities in advance of its media blitz. Chevron also admits that it paid for the relocation of the former Chevron contractor and his family to the U.S., and has provided other "interim support." Even more suspicious is the fact that Chevron has not allowed reporters covering the story to speak to its former contractor, or the American businessman for whose benefit the meetings were set up.

Steven Donziger, an American lawyer who advises the Amazonian communities in the lawsuit, says it "reeks of a Nixon-style dirty tricks operation and Chevron's fingerprints are all over it." 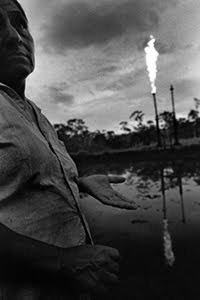 For years, the company has been losing the argument, so it changes the subject:

This specious "bribery plot" is Chevron's latest attempt to change the subject and delay the ruling in the case.

Nothing that Chevron presents in the videos alters the underlying facts of the case. 30,000 indigenous people and campesinos living in the Ecuadorian Amazon continue to suffer a severe public health crisis, including an epidemic of cancer, miscarriages, birth defects, and other ailments. The formerly pristine rainforest and Amazon waterways have been poisoned. And it is due to the fact that the oil company operated using substandard practices that were obsolete in order to increase its profit margin by $3 per barrel.

But you don't have to take my word for it.

Go see the new documentary film CRUDE, and judge for yourself. The film looks at the unprecedented legal battle in the Amazon from all sides. Besides raving about how thrilling and gripping it is, reviewers have praised CRUDE for its "balance," "depth," "intellectual honesty," and "even-handed manner."

Unfortunately for Chevron, the truth has a way of bubbling to the surface, like crude in the steamy jungles of Ecuador.

CRUDE opens in New York on September 9th, followed by Los Angeles, San Francisco, and about thirty more cities across the country. Click here to see when it's coming to a theater near you and visit www.ChevronToxico.com to learn more about Amazon Watch's Clean Up Ecuador Campaign.

Born and raised in Baltimore, Han Shan is a human rights and environmental justice campaigner living in New York City. He is currently serving as a coordinator of the Clean Up Ecuador campaign for Amazon Watch.