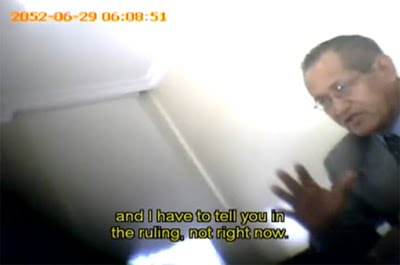 Update: Judge Nunez has decided to recuse himself from the trial in order to clear the path for the legal proceedings to continue uninterrupted. read the statement HERE

Okay, in the interest of full disclosure, there’s no sex [fortunately]. But there’s a whole lot of deceit, and some well edited videotape. It’s a scandal all right, but not quite like Chevron would have us think. Days after the company revealed the bombshell “evidence” that allegedly implicates Ecuadorian government officials and the judge presiding over the landmark Aguinda v. Chevron environmental lawsuit in a bribery scheme, the company’s spy game is rapidly falling apart. Can you say ‘third rate burglary’?

Chevron released four secretly recorded video excerpts online Monday, which it claims to show judicial misconduct and alleged bribery schemes implicating high ranking government officials--including the President of Ecuador Rafael Correa himself, and his sister. Individuals are heard on the tapes talking about a bribery scam to score lucrative contracts to clean up the contaminated Ecuadorian rainforest if a verdict is handed down against the company. And the judge is heard off camera, appearing to say that Chevron is the guilty party. Damning!

Problem is, given the overwhelming scientific evidence against the company, a potential $27 billion judgment possibly a month out, and Chevron’s chronic corruption and delay tactics in the case, news of the “scandal” was seen by many as a fourth-quarter Hail Mary, if not something more sinister. And, as suspected, once the hard questions started being asked, the videos examined, the judge and Ecuadorian government officials questioned, the videos reveal what they truly are: an ol’ fashion set up.

According to the New York Times, “It was not clear from the recordings and transcripts provided by Chevron, however, whether any bribes discussed in the recordings were actually paid or whether Judge Núñez was even aware of plans to try to bribe him. The tapes also did not demonstrate whether the president’s sister was aware of the scheme or had participated in it.”

The questionable timing of the video release, as well as the identities and conduct of those that appear, has Time Magazine asking the question, “Evidence of a Fix, or Video Entrapment?”

The Set up: Chevron’s Accomplices

In the videos, Judge Juan Nuñez is seen talking to two men, Diego Borja and Wayne Hansen. Hansen, with his broken Spanish, asks the judge leading questions, appears to offer a bribe, and attempts to force the Judge to reveal prematurely how he plans to rule. As Time reporter Stephan Kuffner describes, “Nuñez appears to be merely explaining to them the judicial process involved in the Chevron suit.”

The San Francisco Chronicle reports: “The closest the conversation comes to the suggestion of bribery happens when Hansen at one point abruptly asks the judge, "Do you want part of, of my contract?"

The judge responds, "I don't have anything to do with that." Then Hansen appears to correct himself, and says he's talking about money that would go to the government, not the judge.

Borja and Hansen also ask him several times whether he will rule against Chevron, and he repeatedly tells them they must wait for the verdict to find out.”

Hansen again repeats the same leading question in broken Spanish regarding Chevron’s guilt. Nuñez, off camera, shuffling papers and ushering them out of the room, responds ‘si’, which appears to be more of a courtesy conversation ender to two people that have overstayed their welcome, than Chevron’s smoking gun evidence of a premature judgment.

Nuñez spoke to reporters, saying: "Never, never, never have I said that it will go against" Chevron, the judge said. "They asked me if a sentence would come out. I said, 'Yes sir, a sentence will come out.' For or against? I have never said anything."

But who are these set up men? Other than perhaps being the only two people to have ever bought anything out of a Sky Mall catalog [according to Chevron, the videos were recorded with “Sky Mall, Spyer Agent Watch” (Borja), and “Sky Mall, Spy Pen” (Hansen)], they’re dubious characters with a clear agenda.

As Time reports, “Although Chevron insists it had no part in the secret videotaping, it turns out Borja has worked for the company as a logistics contractor.” Indeed. Borja worked for Chevron as recently as March when he assisted the company in eight judicial inspections. And, according to a Bloomberg article, Borja has fled to the U.S., with all expenses paid for by Chevron.

Not much is known about Wayne Hansen, except that he is an “American businessman.” But here’s the catch: the Foreign Corrupt Practices Act (FCPA). The FCPA forbids any U.S. citizen from attempting to bribe a foreign official. So, first of all, Hansen, if he indeed is interested in securing a clean up contract for his company (something the judge resists time and time again and explains that it is not his decision), is involved in something highly illegal.

Secondly, most people, when involved in a crime, don’t videotape themselves carrying it out. Unless of course, the crime that you’re actually committing is attempting to entrap a judge and thwart a legal case where the U.S.’s second largest corporation faces overwhelming evidence against it and a potential $27 billion liability that has shareholders and senior management shaking in its boots. Then, you videotape it. Either because it’s a well thought out, Machiavellian sting operation designed by the company, or because you are hoping to get a pretty penny from Chevron for your “services.”

Hansen, like Borja, has also disappeared into the Chevron Protection Program™, and is nowhere to be found.

And the “government officials” shown orchestrating this scheme from party headquarters? They haven’t been members of the President’s political party (who they claim to represent) for years.

After obtaining the videos, Chevron held onto them for over two months before making them public—plenty of time to cut and splice the footage, potentially leaving the truth on the edit room floor. Chevron’s senior council Charles James claims the delay was so Chevron could carry out “due diligence” in verifying and “preserving” them. However, the Ecuadorian government and Judge Nunez accuse Chevron of altering the tapes.

These kinds of tactics are par for the course for Chevron. Chevron has successfully delayed a key judicial inspection by falsifying a military report, and these most recent videos come out one week before the Premiere on “Crude”. It’s a move out of the same playbook Chevron used to produce and distribute a phony “news report” on the case the same time as a telling 60 Minutes report. But these videos are beyond the pale, and smell of the work of Hill and Knowlton, just one three PR firms the company has on retainer. Hill and Knowlton has a long and rich history in deceiving the public on behalf of industry giants and governments in crisis with a lot to lose, like Big Tobacco and the government of Kuwait on the eve of the first Iraq war.

At the end of the day, these videos don’t change the merits of the case—that in Ecuador’s rainforest, thousands of indigenous peoples and farmers have no clean water to drink due to Chevron’s dump and run oil operations, and continue to suffer through an unbearable health crisis on a daily basis. As the case concludes over the next few months, let’s hope the company’s aversion to justice and responsibility doesn’t lead to even greater nefarious acts.

To learn more on the 16 year legal case against Chevron in Ecuador and the campaign to hold them accountable visit www.chevrontoxico.org.

Make sure to go see the film “Crude”, in a theater near you, and see for yourself the back-story that makes Chevron stoop to unbelievable lows.