One Man's Take On CRUDE from the Los Angeles Premiere 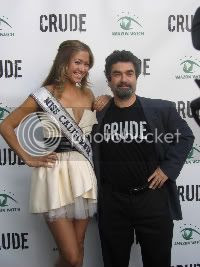 I was fortunate enough to have been invited to the Los Angeles premier screening of the movie “Crude” by filmmaker Joe Berlinger (pictured at left with Miss California) last night in Hollywood. It was a great honor being part of a cause so honest, and to be given the opportunity to meet people like Atossa Soltani (below) – a fierce but kind fireball of passion and energy for the cause of the Ecuadorian people.

For those who may not know the story, Crude is a documentary – quite fair-minded in comparison to most – covering the history of one of the world’s most terrible tragedies – tragic mostly insofar as it did not have to happen. In brief, Texaco began its exploration for oil in Ecuador in 1964 and pursued that effort for decades, with processes so impure that they would have landed anyone associated with them in jail had they been performed in the US. The company knowingly ravaged the rain forest, and caused the sickness and death of tens of thousands innocent people living in the area. Now, Chevron, who acquired Texaco in 2001, is working hard to evade responsibility for the crimes of the company it owns. Those wishing to learn more can do so at Amazon Watch.

In any case, this film is truly a story of power, mystery, beauty, and evil – all presented in a straightforward manner that respects the intelligence of its audience. I won’t give away the ending – in fact, I couldn’t even if I wanted to. There is no reason to believe that this litigation will ever end, as Chevron continues to astound the world, finding inventive new ways to postpone justice and fairness. If you think I’m exaggerating, I urge you to consider the case of the Exxon Valdez. No one at ExxonMobil disputes sole resonsibility for the disaster, yet they were successful in delaying paying off the damages until just this year — more than 20 years after the incident (and at the last minute prevailed upon a judge to reduce those damages by 80%). To me, it’s hard to guess when we could reach a conclusion in the case of Chevron. But speaking of conclusions, one that I personally find obvious is that white people have treated people of color very badly all around the globe for many hundreds of years. This fine film is a reminder that there is precious little evidence that this pathology has slowed – or that it ever will.

Craig Shields is a founder of 2greenenergy.com
Posted: Friday, September 18, 2009