Chevron suffered a significant legal setback in the courts today in its sprawling cynical effort to evade accountability for its environmental devastation in Ecuador. 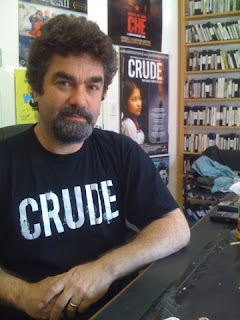 Today, the U.S. Court of Appeals for the Second Circuit ruled that acclaimed filmmaker Joe Berlinger will get an Appeals Court hearing of his appeal of the lower court decision ordering him to turn over 600+ hours of raw footage shot during the making of his award-winning documentary CRUDE. The ruling by the three-judge panel of the Circuit Court also 'stays' the subpoena ordering the production of the footage while Berlinger's appeal is pending.

This is excellent news for supporters of the U.S. Constitution and the First Amendment, and documentary filmmakers and investigative journalists– and everyone that benefits from the work done by these people to shine a spotlight on issues of social and political importance. In other words, this is great news for everyone.

Furthermore, this is a victory for those who have dared to discover the truth about Chevron's environmental disaster in Ecuador, and the communities struggling to hold the oil giant accountable.

Chevron's lawyers from corporate law behemoth Gibson Dunn hope to mine the CRUDE outtakes for any material that they might find useful to their relentless legal and public relations schemes to discredit the plaintiffs, their attorneys and supporters, and the courts in Ecuador.

In response to the ruling, Mr. Berlinger's lawyer Maura Wogan told The Wrap:

And Joe Berlinger had this to say:

"I am delighted that the appellate court seems to understand the significant public interest in my appeal being heard. The stay that was granted today will allow us to argue the merits of our position before the Court."

The ruling by the Circuit Court of Appeals vindicates the position of the growing number of high-profile supporters who have spoken out for Berlinger.

On Friday, film legend and environmental activist Robert Redford penned a powerful opinion article in the Huffington Post, entitled 'Joe Berlinger vs. Chevron: Why We Must All Defend Independent Filmmaking'.

Filmmakers like Joe Berlinger fulfill a crucial role in today's society by providing independent information on pressing contemporary human rights and social issues. Their success as storytellers depends on access to those men and women willing to talk on camera. If the subjects of those documentaries are fearful of the ramifications of telling the truth then the filmmaker has no story.

Without a shield law, there is no recognized journalist/filmmaker/source protection, creating the very scenario we have now. The judges in this case must recognize this is first and foremost a first amendment issue. The higher courts need to overturn the decision and adhere to higher standards of journalistic privilege.

If we allow the voice of the independent artist to be stifled we should expect nothing less than extreme repercussions for freedom of information... and freedom in general.

The New York Times' Dave Itzkoff, who has been following the case closely for the Arts Beat blog at NYTimes.com, wrote:

The brief says the district court’s ruling “was fundamentally flawed” in its interpretation of the 1999 case Gonzales v. NBC, in which the Court of Appeals for the Second Circuit held that even confidential materials can be released if they are likely to be relevant to a significant issue in the case and are not reasonably obtainable elsewhere.

Judge Kaplan’s ruling, the brief said, “effectively shifted the burden of alleged unfairness onto the filmmakers, rendering this circuit’s requirement of a relevance showing meaningless,” and “made it far too easy for Chevron to obtain far too much, precisely what Gonzales forbids.”

In the June 1, 2010 amicus brief, Abrams writes more on Judge Kaplan's misreading of the Gonzalez case and gets to the the real heart of the matter:

The vast distance between the District Court's reading of Gonzales and its text and spirit is illustrated by the Court's emphasis in both its May 10 and May 20 orders on the proposition that, because the individual subjects captured in the outtake footage voluntarily chose to expose themselves to public scrutiny through the inevitable screening of a completed film, it would "not credit any assertion that the discovery of the outtakes by Petitioners would compromise the ability of Berlinger or, for that matter, any other film maker, to obtain material from individuals interested in confidential treatment." This analysis completely ignores the relationship between a documentary filmmaker and the individuals that he or she interviews; it assumes, wrongly, that the participants in such a project would see no difference between the public circulation of a final film painstakingly prepared and edited by the filmmaker who solicited their contribution and whom they entrusted with telling their story and the potentially unlimited display of their every word in a widely-publicized multi-billion dollar international litigation. 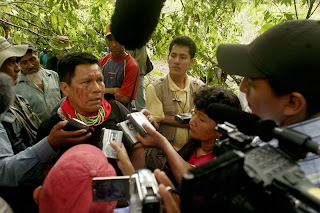 And lastly, last week ahead of today's hearing, NPR's All Things Considered covered the legal battle in a story called 'A 'Crude' Awakening: Chevron Vs. The Documentarian'. The story predictably gives Chevron lawyer Randy Mastro of Gibson Dunn and company spokesman Kent Robertson each a chance to weigh in with their cynical spin. After today's loss in the courts over their attempts to get at Berlinger's CRUDE outtakes, I'm sure they're huddling up to devise their next tactic in Chevron's treacherous strategy to deceive, deny, and delay... until it all goes away.

But the communities in Ecuador's Amazon rainforest have other plans, and have vowed to struggle until they get the justice that has been denied them so long.

And of course, Berlinger's legal battle isn't over. While the Circuit Court stayed the lower court's order to turn over all his raw footage to Chevron, Berlinger still has to argue his case on appeal. Want to help with the costly legal battle? Any amount you can donate to the CRUDE First Amendment legal defense fund is deeply appreciated.

And if you still haven't seen the explosive, award-winning documentary CRUDE, see it, and judge for yourself.