While BP's rig explosion and oil spill in the Gulf has been undoubtedly tragic and the long-term impact on the U.S. Gulf Coast could be horrific, the catastrophe has at least brought renewed attention to other international oil disasters. A long, powerful article in the New York Times last week looked at the "5 Decades Old" scourge that oil has been to the Niger Delta in Nigeria: 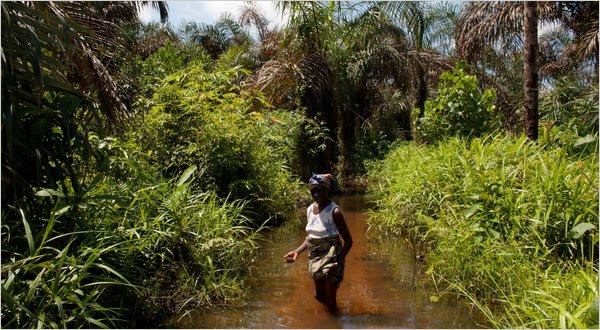 Hannah Baage walked through polluted Gio Creek in Kegbara Dere. She said recently, “There is Shell oil on my body.” Photo by Jane Hahn for The New York Times

BODO, Nigeria — Big oil spills are no longer news in this vast, tropical land. The Niger Delta, where the wealth underground is out of all proportion with the poverty on the surface, has endured the equivalent of the Exxon Valdez spill every year for 50 years by some estimates. The oil pours out nearly every week, and some swamps are long since lifeless.

Perhaps no place on earth has been as battered by oil, experts say, leaving residents here astonished at the nonstop attention paid to the gusher half a world away in the Gulf of Mexico. It was only a few weeks ago, they say, that a burst pipe belonging to Royal Dutch Shell in the mangroves was finally shut after flowing for two months: now nothing living moves in a black-and-brown world once teeming with shrimp and crab.

And of course another oil disaster nearly five decades old that is getting some new attention is Chevron's 'Rainforest Chernobyl' in Ecuador's Amazon region. Here's a Reuters report that breaks down the companies recently making headlines "for winning or losing credibility based on environment-related activity." I'm re-posting the Chevron section in its entirety:

The oil spill in the Gulf of Mexico strikes close to home for Chevron as it faces a $27 billion lawsuit brought on by the indigenous people in the Amazon region of Ecuador for water pollution, and a fresh Chevron oil spill in Utah, a bi-weekly analysis of companies in the news by ASSET4 data providers shows.

Company selections were made by Christopher Greenwald, director of data content at ASSET4, a Thomson Reuters business that provides investment research on the environmental, social and governance performance of major global corporations. These ratings are not recommendations to buy or sell.

Here is a breakdown of the companies that made headlines June 5 to June 18 for winning or losing credibility based on environment-related activity.

The recent news surrounding the creation of a $20 billion escrow fund to pay for claims in the Gulf of Mexico has led to renewed attention in the past weeks to the $27 billion case against Chevron brought by indigenous people in the Amazon region of Ecuador.

The lawsuit which has stretched on for nearly 17 years seeks reparations for environmental- and health-related damages caused by the dumping of over 18 billion gallons of polluted water in Ecuador by Texaco between 1964 and 1990. Last week two protesters were arrested during a House Energy Committee meeting after attempting to give a bottle of contaminated water from the Amazon region to Chevron’s Chairman John Watson.

Chevron last week also faced an embarrassing oil spill of 500 barrels of oil from a leaking pipe, which devastated a lake at a local park in Salt Lake City, Utah.