Four very different people arrived last night in New Orleans on a late flight from Quito, Ecuador. One is a quiet but fierce 71-year-old grandmother with 27 grandchildren. Another is a gentle, soft-spoken man who is a leader of his Indigenous tribe from the Amazon. Another is a serious and sober man who has won worldwide acclaim for his unique work. And the last is another Indigenous man from the Amazon, who is more sharp-tongued than his traveling companion, but shares his good humor and dignified demeanor.

The four Indigenous and community leaders from Ecuador's Amazon rainforest are on the front-lines of the nearly two-decade struggle to demand oil giant Chevron clean up the massive contaminate the company left behind in their lands. I've written profiles of two of them here before; Cofan leader Emergildo Criollo was in the U.S. in early March to help deliver 350,000 letters of support for cleanup in Ecuador to new Chevron CEO John Watson and campesina activist Mariana Jimenez was in Houston just a few weeks ago to speak out at Chevron's 2010 shareholder meeting.

With them is Humberto Piaguaje, a leader of the Secoya tribe who has been outspoken about Chevron's impact on his people, and Luis Yanza, who has helped organize the 30,000 people who have mounted the historic legal action against Chevron. In 2008, Luis won the Goldman environmental prize, often described as the Nobel Prize for the environment.

They have come to the U.S. Gulf Coast in order to share their experiences with the long-term impacts of oil pollution with communities dealing with the tragic BP oil spill that continues to gush into the Gulf of Mexico.

The United Houma Nation, a Native American tribe living on the Gulf Coast in southeast Louisiana and already suffering serious consequences of the spill, are hosting a cultural exchange with their Ecuadorean counterparts. Read/listen to this National Public Radio report on the BP spill's impact on the Houma tribe: Native American Group Hit Hard By Oil Spill.

Photo of burning oil and oil slick on the surface of the Gulf of Mexico by James Duncan Davidson, part of the powerful TEDxOilSpill Expedition photography set.

The Amazon leaders will tour areas of the Bayou affected by the spill, have community exchanges with the Houma and other Gulf coast residents, and participate in a public Town Hall forum in the heart of the largest Houma community this coming Thursday evening.

Today, with the support of Amazon Watch's Clean Up Ecuador Campaign and our allies at Rainforest Action Network's Change Chevron campaign, the Ecuadorean leaders released a report, entitled The Lasting Stain of Oil: Cautionary Tales and Lessons from the Amazon. 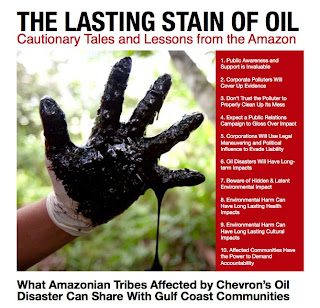 While BP and the United States Government work to stop the oil that continues flowing into the Gulf of Mexico, coastal residents are preparing for the long-term impacts of the oil spill, and working to determine how they will maintain their environment, culture, and livelihoods in the wake of such a disaster. What can Gulf Coast residents learn from other communities that have suffered the terrible consequences of oil industry recklessness?

The report contains ten lessons from the Ecuadoreans' experience with Chevron that Gulf Coast residents – and others affected by oil spills – can learn from in order to hold polluters accountable, and design strategies for recovery from environmental disasters. Here is the first of the ten sections:

1. Public Awareness and Support is Invaluable It took decades for communities in the remote Ecuadorean Amazon to draw the world’s attention to Chevron’s systematic pollution of the rainforest. While affected communities in Ecuador have spent years working to raise public awareness of their plight, there has thankfully been worldwide attention focused on BP’s tragic oil spill in the Gulf since day one. Gulf Coast communities have a tremendous opportunity to hold BP accountable by capitalizing on the worldwide attention this terrible tragedy has garnered. Although BP says that it plans to take full responsibility for the damages caused by its spill and restore the Gulf Coast to the way it was before – “make it right" – the experience in Ecuador shows that oil companies do the right thing only when compelled to do so by a combination of political, financial, media, and community pressure. Nearly half a century has elapsed since Chevron began oil operations in the Ecuadorean Amazon, and the company is still fighting tooth and nail to evade responsibility. Lesson: Seize the moment. With support of environmental and health organizations, affected communities must take advantage of widespread attention on the BP disaster, and make clear and strong demands now for a permanent place at the table in all decision-making about remediation and restoration of their communities and the environment.

In addition to excerpts from the report, we will be reporting from the Amazon delegation to the Gulf Coast all week, and sharing photos, video, and stories from this exchange of solidarity between front-line communities affected by oil.