On Monday, after 17 years of intense legal battle, Chevron, the second largest oil company in the United States, was found guilty by Ecuadorian courts for massive environmental contamination of the Amazon and was ordered to pay a fine of $9 billion in damages. This represents the largest judgment ever against a U.S company for environmental contamination and marks the first time that indigenous and farmer communities have successfully won a judgment in foreign courts against an American company for environmental crimes abroad.

From 1964 to 1990 Chevron (formerly Texaco) operated a large oil concession in the northeastern region of the Ecuadorian Amazon, reaping billions of dollars in profits before pulling out of Ecuador in 1992.

Chevron has admitted during the long-running trial in both US and Ecuadorian courts that it created a system of oil extraction that led to the deliberate discharge of approximately 18 billion gallons of chemical-laden "water of formation" into the streams and rivers of Ecuador's Amazon, home to six indigenous groups.

Over the course of more than two decades of operations, Chevron abandoned more than 900 unlined waste pits gouged out of the jungle floor that leech toxins into soils and streams; contaminated the air by burning the waste pits; dumped oil along roads; and spilled millions of gallons of pure crude from ruptured pipelines. Internal company documents demonstrate that Chevron officials ordered field workers to destroy records of oil spills. The company refused to develop an environmental response plan or pipeline maintenance program, and Chevron never conducted a single health evaluation or environmental impact study despite the obvious harm it was causing. 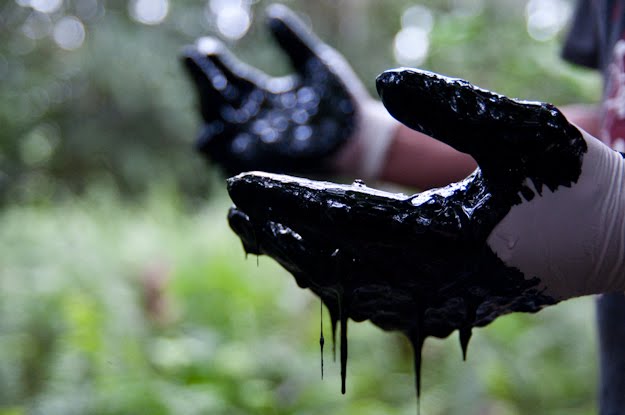 As a result of Chevron's pollution, several indigenous groups in Ecuador have been decimated and more than 9,000 people are at significant risk of contracting cancer in the coming decades, according to reports submitted to the court. Scientific evidence submitted during the trial definitively proves that all of Chevron's 378 well and production sites, most of which were built in the 1970s, are extensively contaminated.

The Verdict in Ecuador

The historic multi-billion verdict against Chevron, which reported a net profit of $19 billion last year, is a tremendous step forward for the Ecuadorian communities who have been suffering for decades from Chevron's contamination. However, as expected, oil giant Chevron has vowed to appeal the decision and continue their scorched earth legal and public relations campaign, designed to exhaust the plaintiffs' resources, portray the case and the courts in Ecuador as corrupt, and, in the end, evade enforcement of the multi-billion verdict.

In the wake of the court ruling on Monday, the Goldman Environmental prize winning attorney Pablo Fajardo, who represents the indigenous and farmer communities of the Ecuadorian Amazon, released a statement highlighting Chevron's "intentional and unlawful contamination of Ecuador's rainforest." Here is a brief excerpt:

"Rather than accept responsibility, Chevron has launched a campaign of warfare against the Ecuadorian courts and the impoverished victims of its unfortunate practices. We call on the company to end its polemical attacks and search jointly with the plaintiffs for common solutions. We believe the evidence before the court deserves international respect and the plaintiffs will take whatever actions are appropriate consistent with the law to press the claims to a final conclusion."

Oil industry analysts and environmental law experts have weighed in on the precedent-setting nature of the historic ruling in Ecuador.

According to a story filed by the Los Angeles time, John van Schaik, an oil analyst at Medley Global Advisors in New York, said: "...the fact that the Lago Agrio court ruled in favor of the plaintiffs sends a signal to oil companies that, more than ever, they need to be good corporate citizens. The ruling shows that times have changed, and companies need to take environmental concerns seriously."

In a Bloomberg report, Robert Percival, a law professor and director of the environmental law program at the University of Maryland School of Law in Baltimore, said: "The case really sends a message that companies operating in the undeveloped world cannot rely on a compliant government or lax environmental rules as a way of permanently insulating themselves from liability."

Since acquiring Texaco in 2001, Chevron's legal and public relations strategy with respect to Ecuador, has been motivated not only by a desire to avoid a massive multi-billion payout, but also by the broader implications this case has for the future of the global extractives industry. More to the point, Chevron's scorched earth tactics have been designed to delay and disrupt the outcome of the long-running environmental trial in Ecuador, but also, and perhaps more importantly, to demonstrate clearly to communities around the world that the pursuit of justice against multinational corporations is futile.

But now the judgment is in. Chevron has been found guilty of massive environmental crimes in the Amazon. The San Ramon based oil giant has been ordered to pay a multi-billion dollar judgment.

Over the next weeks and months, the oil industry and right-wing press outlets will continue to laud Chevron's bravado, encouraging the oil major to undermine the rule of law in Ecuador and condemn the affected people of the Amazon to years of continued suffering.

And the question to all of us is: How far have we come as a people? Will the 21st century be a time where the greed of a few tramples the hopes of the many? Or will justice trample greed?

What we can be sure of is that the indigenous and farmer communities of the Ecuadorian Amazon will continue, against all odds, in their heroic struggle for clean water, health and a brighter future.

Mitch Anderson is the Corporate Campaigns Director at Amazon Watch