More Fireworks as Lawyers for Ecuador Plaintiffs Fire Back at Chevron

It feels more and more like a cliché to even note, but there have been more fireworks in the monumental, marathon litigation over Chevron's contamination in the Amazon.

Only days after Chevron turned around and sued the victims of its abuses in Ecuador's rainforest, accusing them of racketeering and extortion for demanding cleanup, lawyers for the Ecuadorian plaintiffs fired back. Patton Boggs, the high-profile DC law firm now representing the plaintiffs filed its own suit yesterday, accusing Chevron and its lawyers at Gibson Dunn of "tortiously interfering" with the firm's representation of the Ecuadorians. Tortious interference is a matter of common law and is also referred to as intentional interference with contractual relations.

This is exactly where it gets into a bunch of legalistic mumbo-jumbo for most people (including yours truly) but Patton Boggs' press release announcing the filing of its suit lays bare Chevron's legal manipulations for the sideshow they are. The Complaint referred to in the beginning is Chevron's latest legal assault on the Ecuadorians, their preposterous RICO suit:

What is clear from the Complaint is that Chevron has little interest in litigating the merits of the claims, brought by the indigenous people of Ecuador, that its predecessor Texaco’s conduct has caused an ecological disaster in an environmentally sensitive rainforest the size of the State of Rhode Island. Rather, Chevron wants to litigate about the behavior of the lawyers, consultants, and spokespersons who have dared to represent these people during the past 18 years. Chevron simply cannot escape three glaring facts: (1) the trial is in Ecuador, under Ecuadorian law and procedure, because Chevron fought for seven years to have the case moved from a federal court in New York to an Ecuadorian court; (2) Chevron’s attacks on the relationship between certain representatives of the plaintiffs and an expert appointed by the Ecuadorian court ignore the reality that ex parte communications are permitted in Ecuador, and that the Ecuadorian court, by written order, allowed both sides to submit additional expert reports -- confirming the court’s right to consider or not consider the report of the questioned expert; (3) Chevron succeeded in its demand that a new judge be appointed in the Ecuadorian proceeding. Therefore, Chevron’s liability will be determined in the court of its choosing, after having a complete right to submit additional expert reports in September (Chevron submitted twelve), and before a new and impartial judge appointed at Chevron’s request. It is in this context that Chevron now seeks to derail the Ecuadorian trial with the aid of the very American courts that it previously asked not to hear the case.

Of course, getting lost in all this -- as usual -- is the reality for thousands of men, women, and children in the Ecuadorian Amazon who lack water that won't make them ill (or possibly kill them). Their decades-long struggle for justice, dignity, and a better future is treated increasingly like a sideshow to the courtroom battles on which their fate may rest. 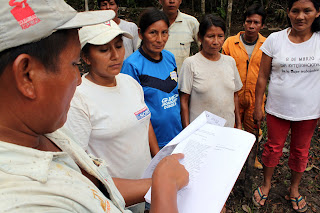 Members of the Kichwa indigenous community of Rumipamba listen to their names being read on the complaint from the lawsuit Chevron filed against them last week, accusing them of racketeering and extortion for their efforts to hold the company accountable. Photo by Kevin Koenig/Amazon Watch