On Tuesday, February 2nd, Chevron filed a lawsuit in the Southern District of New York accusing the 47 named plaintiffs in a monumental environmental lawsuit against the company of engaging in racketeering and extortion in their efforts to demand cleanup of the company's contamination of their land in Ecuador's Amazon region. Several of their lawyers and consultants on the case are also named as defendants. Chevron names Amazon Watch as well as our founder and Executive Director Atossa Soltani as "non-party co-conspirators" in the complaint.

Chevron is adding insult to injury with its heinous attacks on the indigenous and campesino communities who have already suffered for decades from the company's criminal misconduct in Ecuador.

More than 17 years after the Ecuadorians sued to demand cleanup of one of history's worst oil disasters, Chevron is now persecuting the victims of its pollution in the same U.S. court from which the company successfully removed the case nearly a decade ago.

We are appalled to be named in Chevron's legal assault, but will not be intimated by this corporate bullying. We stand in solidarity with the victims of Chevron's ongoing and apparently escalating abuse, and will stand with them until they get the justice they have sought for too long.

This attack by Chevron is merely the latest in a pattern of abusive legal tactics by the company. Chevron can no longer deny the mountain of unassailable scientific evidence that the company is guilty of massive contamination of the rainforest environment, which has caused an epidemic of cancer and other illnesses for local residents. Facing an imminent verdict from Ecuador's courts in the environmental lawsuit, Chevron is lashing out against the plaintiffs and their allies in Ecuador and the U.S. with increasingly desperate attacks.

Once again, we call on Chevron's management and Board of Directors to put an end to its abusive tactics in this case. Until Chevron takes responsibility for its oil disaster in the Amazon, it will remain an indelible stain on the oil giant and the legacy of those who work to deny justice to the communities suffering from the company's abuses. 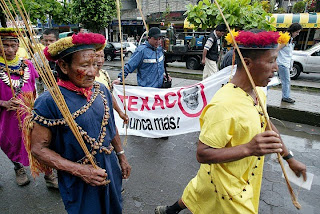 Above: some of the people Chevron is accusing of racketeering & extortion for daring to demand the company clean up its toxic mess in their ancestral territory. Photo by Lou Dematteis

Watch for reactions from the Ecuadorians named in Chevron's suit, as well as analysis from activists, the media, and law experts, in future posts.