U.S. Court's Extraordinary Moves to Halt Enforcement of Verdict against Chevron in Ecuador: Why?

In early February, a week before a court in Ecuador passed down a historic $9.5 billion judgment against Chevron for massive environmental contamination in the Amazon, lawyers for the oil giant went to the U.S. District Court in New York, seeking an order to stop enforcement of the anticipated verdict.

According to Business Week:

It was highly unusual for a federal judge to block the effect of a foreign court's action before it occurred. (He has since turned his order into a preliminary injunction, which remains in effect.) Kaplan didn't rule on the merits of the environmental claims; in fact, he stressed that he didn't know much about the underlying equities. He didn't sound sympathetic, however: "Among the obvious facts here are that the Ecuadorian plaintiffs are in this for money. They may be in it for other things, but they are in it for money."

This past Monday, Judge Kaplan turned his order into a preliminary injunction, a move that Karen Hinton, U.S.-based spokeswoman for the Ecuadorian communities ravaged by Chevron's contamination lambasted in a statement:

This decision is a slap in the face to the democratic nation of Ecuador and the thousands of Ecuadorian citizens who have courageously fought for 18 years to hold Chevron accountable for committing the world's worst environmental disaster. The trampling of due process in the court's refusal to consider key evidence or hold a hearing to determine the facts is an inappropriate exercise of judicial power that will harm the United States' relationship with Latin America and other parts of the world. It disregards the scholarly and comprehensive 188-page opinion of Ecuadorian Judge Nicolas Zambrano, a well-respected member of Ecuador's judiciary. It also ignores key evidence that Chevron has committed a series of frauds in Ecuador to cover up its unlawful misconduct.

We want to emphasize that after appeals in Ecuador the Ecuadorian plaintiffs retain their full right to lawfully enforce the judgment of their own country's courts in any of the dozens of nations around the world where Chevron has assets. In the meantime, we will appeal the decision on multiple grounds.

But besides being "a slap in the face" of the Ecuadorian victims of Chevron's abuses, the ruling by Judge Kaplan also seems like an extraordinary abuse of power.

First of all, Kaplan ordered the preliminary injunction in connection to a RICO suit that Chevron has brought against the Ecuadorian plaintiffs and their lawyers, including U.S.-based human rights attorney Steven Donziger, accusing them of being part of a grand international conspiracy to extort the company. Chevron brought the case in Kaplan's courtroom after successfully getting Kaplan to order filmmaker Joe Berlinger to turn over all the outtakes from Crude, a documentary about the legal battle against Chevron. And it was Kaplan that ordered Steven Donziger to turn over his entire 17-year case file, including personal diaries, and every email he has sent anyone in connection with the efforts to hold Chevron accountable. Kaplan even ordered Donziger to sit for almost two weeks of depositions with Chevron attorneys, and appointed a Special Master to oversee the depositions who transcripts show to be openly hostile to Donziger.

Having sat through hearings in Judge Kaplan's courtroom on a number of occasions, I've seen the judge's almost visceral distaste for Donziger. In fact, it was Kaplan who invited Chevron to file a RICO suit in the first place!

Here's Judge Kaplan speaking from the bench during a hearing on Chevron's motion to depose Donziger back in September, 2010:

“The object of the whole game, according to Donziger, is to make this so uncomfortable and so unpleasant for Chevron that they’ll write a check and be done with it. . . . So the name of the game is, arguably, to put a lot of pressure on the courts to feed them a record in part false for the purpose of getting a big judgment or threatening a big judgment, which conceivably might be enforceable in the U.S. or in Britain or some other such place, in order to persuade Chevron to come up with some money. Now, do the phrases Hobbs Act, extortion, RICO, have any bearing here?”

Of course, Chevron took the big fat hint and filed its unbelievable RICO suit, and that led to Kaplan's order this week that includes this significant passage:

Absent a preliminary injunction, Chevron would be forced to defend itself and litigate the enforceability of the Ecuadorian judgment in multiple proceedings. There is a significiant risk that assets would be seized or attached, thus disrupting Chevron’s supply chain, causing it to miss critical deliveries to business partners, damaging “Chevron’s business reputation as a reliable supplier and harm the valuable customer goodwill Chevron has developed over the past 130 years,” and causing injury to Chevron’s “business reputation and business relationships.”

And while I don't have the transcript in front of me, I also recall Judge Kaplan making similar remarks during the hearing at which he ruled immediately from the bench granting a temporary restraining order. There, he said, Chevron faced imminent and irreparable harm, which would also harm the public interest, as the company is important to delivering commodities so important to the smooth functioning of our economy.

The job of determining whether a particular sector of the economy or individual industry demands extraordinary legal protection belongs to Congress, not the courts. This is de facto policy-making on behalf of one specific corporation from the bench, and should be shocking to anyone who cares about the basic checks and balances in our political system. Besides, the idea that Chevron faces "irreparable harm" is ludicrous. We're talking about one of the largest companies on the planet, which had $17 billion in cash or cash equivalents on hand according to last quarter's financial statement.

And yesterday, Ecuador's Ambassador to the United States Luis Gallegos weighed in too, expressing "consternation that a U.S. court has elected to pass judgment on Ecuador's courts - especially since it was the courts of the United States that chose to have this litigation resolved in Ecuador."

As reported by The New York Times:

In his statement, Gallegos pointed out that the case was heard in Ecuador only because Texaco had requested it be moved there from the Southern District of New York.

Kaplan's lengthy opinion "does not accurately reflect upon or credit the independence of the Ecuadorian judiciary," Gallegos said.

The statement, which stressed that the Ecuadorean government was not commenting on the merits of the Lago Agrio case, included examples of what the embassy called the judiciary's "history of independent judgments."

Several of the cases mentioned featured Chevron or Texaco as a party.

One was a win for Texaco in 2000 in an income tax case. Another was a 2002 case in which Chevron won motions to dismiss against the Ecuadorean government in what the statement described as three "civil cases." Chevron also won $1.5 million in a case against the government, the statement said.

The Times story notes that Judge Kaplan's preliminary injunction order makes "numerous references" to a report on Ecuador's judiciary commissioned by Chevron and submitted to the court by the oil company. What the Times story doesn't say is that it appears that the report –– by lawyer, politician, and newspaper columnist Vladimiro Alvarez Grau –– is the only thing Judge Kaplan relies on for his analysis of Ecuador's judiciary. Alvarez, it turns out, is an outspoken critic and fierce political opponent of Ecuadorian President Rafael Correa. I'm sure Alvarez is "impressively credentialed," as Kaplan notes in his ruling, but it's disturbing that a U.S. judge would rely solely upon a single, one-sided, self-serving report submitted by Chevron for his analysis of Ecuador's entire judicial system.

But here I am again, a few hundred words into an article about this issue without more than a glance toward the plight of the communities throughout Chevron/Texaco's former drilling fields. 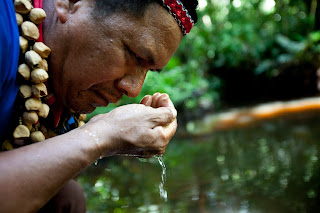 Cofan indigenous leader Emergildo Criollo smells for petroleum contaminants in a stream near his home in Ecuador's Amazon rainforest. Photo by Caroline Bennett

After nearly 17 years of litigation, they finally prevail in their legal battle, only to have a U.S. judge – from the same courts from which Chevron successfully fought to get the case moved to Ecuador, mind you – telling them that they can't enforce the judgment.

Law Professor Arthur Miller is given the proverbial last word in the lengthy Businesses Week article I mentioned above. He is considered perhaps the nation’s foremost expert on Civil Procedure – the rules of the litigation game. He is known for opening his classes on the subject at NYU and Harvard Law with the dramatic statement that given a choice in court between having the facts on his side or mastery of procedure, he’d take procedure and beat you every time.

And yet, it is Miller who laments at the end of the piece, that the "merits are getting lost" in this epic legal battle over who will ultimately pay to clean up the ongoing environmental and public health catastrophe gripping the oil-ravaged Ecuadorian Amazon. And by "merits," he means the facts.

In its legal war of attrition to evade accountability, it seems that Chevron has mastered the "procedure" in the courts, making this case about everything besides the "merits," the facts, the indisputable mountains of evidence that buttress the 188-page verdict delivered by the courts in Ecuador on February 14th.

The Ecuadorian judge, Nicolas Zambrano, based his decision on voluminous technical data submitted by both sides, concluding, quite simply, that during its years of operations, Texaco had the means to employ safer methods of oil exploration, but chose to cut costs to increase its profit margin, and in doing so, imperiled lives.

And now, thousands of men, women, and children continue to suffer cancers and other oil-related illnesses. Their water is poisoned. And the pollution remains all around them.

How long will courts in the U.S. allow "procedure" to trump the "merits" of the communities need for a cleanup, and Chevron's responsibility for providing it? How long until justice prevails?