Diego Borja, self-proclaimed 'dirty tricks' operative for Chevron in Ecuador, was scheduled to be in federal court in California yesterday. He didn't show but his high-priced criminal defense lawyers –– selected and paid for by Chevron –– did, including Cristina C. Arguedas, who represents such high-profile clients as disgraced former San Francisco Giants star Barry Bonds.

Sources suggest Borja's lawyers didn't make a very convincing argument about why their elusive client shouldn't have to testify under oath about his efforts to undermine the trial over Chevron's massive contamination in Ecuador's Amazon rainforest. Now it's looking more and more likely that this guy will be testifying very soon.

Borja was caught on tape talking about his dirty tricks operation –– including tampering with evidence, offering bribes, and attempts at entrapping a judge –– on behalf of his "bosses" at Chevron. A friend-turned-whistleblower named Santiago Escobar made recordings of Borja talking about how the company "cooked evidence" in the trial. Escobar testified about Borja's admissions before Ecuador's Prosecutor General's office, which is conducting its own investigation. 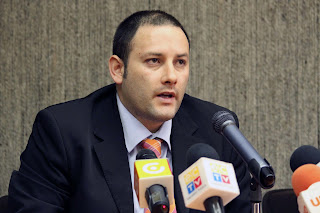 Whistleblower Santiago Escobar speaking to media about his former friend Diego Borja, who fled Ecuador with the help of Chevron

When Borja is deposed, what will he tell us about Chevron's General Counsel Hewitt Pate and his involvement with schemes aimed at corrupting the Ecuadorian judiciary? How about former top lawyer Charles James, a lawyer for George W. Bush's Justice Department who was Chevron's GC at the time Borja was concocting a sting operation against the judge then overseeing the trial in Ecuador? What will Borja tell us about the Jones Day lawyers like Tim Cullen at whose San Francisco offices Borja had a meeting in the midst of his Nixon-style dirty tricks operation?

While I like to keep a focus on the heart of the matter –– that is, incontrovertible evidence that Chevron is guilty of oil pollution that continues to sicken and kill thousands of people in one of Ecuador's poorest regions –– it's hard not to wonder about the legal implications of Borja's potential testimony. If he implicates Chevron bigwigs and top lawyers from the company's outside law firms, we may see investigations under the Foreign Corrupt Practices Act. It could get very serious, very quickly.

In September, Judge Edward M. Chen of the U.S. District Court for the Northern District of California said that Chevron had "implicated" Borja as a witness to its claims against the courts in Ecuador, and ordered Borja to sit for a deposition by attorneys for the Republic of Ecuador. Borja's attorneys filed a motion to "quash" the subpoena and avoid providing testimony, leading to the hearing yesterday.

Lawyers for the communities suing Chevron for clean-up in Ecuador surely have sights on deposing Borja under oath and learning more about his 'dirty tricks' designed to undermine the trial in Ecuador. However, this discovery motion granted to Ecuador is in relation to Chevron's attempts to force the country into a binding arbitration, where the oil giant would try to make the Republic –– and its citizens –– pick up the tab for the toxic mess left behind by the American company.

In his original order that Borja be deposed, the judge wrote that there's evidence "Mr. Borja was not an innocent third party… but rather was a long-time associate of Chevron whom Chevron would pay for any favorable testimony."

Among Diego 'Dirty Tricks' Borja's quotes from the recordings cited in the legal filings is this gem:

"... I have correspondence [with Chevron officials] that talks about things you can't even imagine, dude... they're things that can make the Amazons win this just like this [snapping fingers]... I mean, what I have is conclusive evidence, photos of how they managed things internally."

Last summer, Borja, a long-time Chevron employee in Ecuador who has been closely associated with the oil giant's legal defense in the environmental lawsuit, spearheaded an undercover sting operation against the judge then overseeing the trial. Borja and a shady American former drug trafficker and convicted felon named Wayne Hansen posed as businessmen interested in contracts for environmental remediation should the plaintiffs prevail in the legal battle demanding Chevron clean up its oil contamination.

They made secret spy-pen video recordings of the judge, and after Borja flew to San Francisco and met with Chevron lawyers, returned to Ecuador where they attempted to bribe a man who passed himself off as an official with Ecuador's ruling political party. Unfortunately for the con men, they were trying to bribe another con man. The "party official" turned out to be –– wait for it –– a used car salesman.

Unfortunately, it didn't stop Chevron from breathlessly declaring in press releases and statements blasted to mainstream media that it had discovered a "bribery scandal" implicating the judge in Ecuador.

But as the New York Times reported about the recordings Borja and Hansen made of the judge:

"No bribes were shown in the tapes..."

Since cooperating with Chevron in cynical efforts to corrupt the judicial process in Ecuador, Borja has been holed up in a $6000/month home just minutes away from the company's headquarters in San Ramon, CA.

You know the old adage about keeping your friends close, and your enemies closer? For Chevron's executives and outside lawyers, it's yet to be determined which one Diego Borja will turn out to be. Stay tuned.