Along with our campaign allies at RAN & the tricksters at The Yes Men, we've been having some fun exposing Chevron's widely-panned new 'We Agree' ad campaign for the insulting greenwash it is.

But now, I want to turn back to some serious matters in the ongoing legal battle to hold Chevron accountable for massive devastation in Ecuador's Amazon rainforest region.

The Amazon Defense Coalition (ADC) issued a press release a few weeks back that highlighted a legal judgment against Chevron in Mississippi this past Spring. A jury verdict says that Chevron must pay $19 million dollars to five plaintiffs who were exposed to leaded gasoline fumes from leaking underground gas tanks owned by the company. According to the Associated Press, the daughter of the lead plaintiff in the lawsuit was born "severely mentally disabled, and the children of the other women suffer from respiratory conditions and learning disabilities."

What does this have to do with Ecuador and the mothers and children there who say Chevron is poisoning them?

Well, it was Chevron’s lead American expert in the Ecuador case John Connor who also testified in this recent Mississippi case. The U.S. jury rejected Connor's testimony, and a reading of the court transcript unveils some very damning information.

An excerpt from the ADC press release:

In the trial -- which took place in Jefferson County, Mississippi -- Connor conceded on cross-examination that over almost two decades of work for Chevron he has never once concluded that the impact of his client’s operations has harmed even a single person, according to the court documents. Connor testified that he knew of no circumstance where “there were any injuries of individuals that were the responsibility of Chevron or Texaco.”

Connor also tried to exonerate Chevron by testifying that any contamination must have been caused by leaks from three storage tanks owned by a smaller company in the area, not the larger tanks owned by Chevron. But when confronted on cross-examination by evidence that he had misidentified the site from a state database, Connor admitted that he had never taken any steps to definitively verify that the gas tanks actually existed on the smaller company’s property. 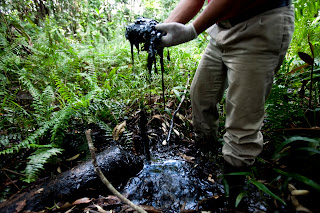 John Connor: "Chevron paid me well to tell you this oil poses no danger to anyone."

Connor's testimony in Mississippi is very similar to his under-oath spin in the Ecuador case, intended to shore up Chevron's ludicrous argument that Ecuador's state oil company Petroecuador is responsible for all of the oil contamination in the region. This, despite Chevron admitting that it dumped more than 18 billion gallons of toxic wastewater into Amazon waterways depended upon by thousands of local people for drinking and bathing. This, despite the fact that Chevron (in the form of its subsidiary Texaco, of course) dug every one of the 900+ toxic waste pits that the company abandoned, many of which continue to leech poisons into the soil and ground water [see this video to understand exactly how that happens].

Under cross-examination in Mississippi, Connor also admits that Chevron has paid him "at least" $8 million over the years and estimates that $5 million of that has been for his work in Ecuador.

Ordering Chevron to pay $19 million in damages, a jury in Mississippi rejected his ludicrous and laughable testimony and concluded that this guy has no credibility. And I encourage you, dear reader, to read the transcript. Even on paper in a format as weird as a court transcript, he sounds evasive and slippery at best, and like he's simply lying through his teeth at other times.

Now, people who are following the monumental class action in Ecuador will know that Chevron has been in a legal frenzy over the last few months, filing legal actions against more than 20 people on the plaintiffs' side demanding 'discovery' ranging from turning over footage and files to sitting for depositions conducted by Chevron lawyers.

The plaintiffs, busy dealing with this legal onslaught by a company with nearly bottomless resources, have yet to be able to truly fight fire with fire and seek discovery from Chevron in the same way.

In September, a U.S. judge granted a request by the government of Ecuador to subpoena Chevron's self-avowed 'dirty tricks guy' Diego Borja. Borja, of course, was captured by a friend-turned-whistleblower talking about how the company "cooked evidence" in the trial in Ecuador, and suggesting that his "bosses" at the company were directing him.

Now, it's time for the plaintiffs to drop some subpoenas on some of these Chevron "bosses" so we can learn the truth about the dirty tricks and lies that Chevron has been employing to evade accountability for its devastation in Ecuador.

But the more I learn about Chevron's highly-paid and deceitful "expert" John Connor, I think he may be the perfect place to start.