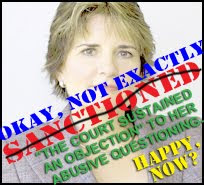 UPDATE - Dec. 7th: A Federal Magistrate Judge has issued a ruling to clarify his previous order in response to a motion from lawyers for the Ecuadorian plaintiffs and expert consultant Doug Beltman. While the judge in Colorado did order Andrea Neuman and the other Gibson Dunn lawyers for Chevron to refrain in the future from the kind of abusive questioning it had engaged in during a deposition of Mr. Beltman, he declined to grant sanctions against Neuman and her colleagues. For more details read this post.

A federal court has sanctioned Andrea Neuman, a top lawyer for Chevron's attack-dog outside law firm Gibson Dunn, for attempting to intimidate a witness in the Chevron-Ecuador case. A federal magistrate judge in Colorado sanctioned Neuman for abusive questioning of Doug Beltman, a respected expert on environmental chemistry, toxicology and ecology, who serves as a consultant for the indigenous and campesino plaintiffs demanding Chevron clean up its spreading contamination in Ecuador's impoverished Amazon rainforest region.

As I've written about before on this blog, Chevron has been on a legal rampage, filing motion after motion against the Ecuadorian plaintiffs' expert witnesses and consultants residing in the U.S. Most notably, the oil giant outraged 1st Amendment supporters when it subpoenaed hundreds of hours of raw footage from filmmaker Joe Berlinger whose film CRUDE examined Chevron's toxic legacy in Ecuador.

The Chevron lawyers persuaded the courts to allow them to depose Doug Beltman, an ecologist and former director of ecological risk assessment with the U.S. Environmental Protection Agency. Beltman is now the Vice President of an esteemed environmental consulting firm in Colorado called Stratus Consulting. He sat for a deposition with Gibson Dunn's Andrea Neuman on October 6th in Denver, and immediately faced an abusive barrage of questions that amounted to "naked, blatant intimidation," according to the plaintiffs' motion for a sanction of the Chevron lawyers.

"Counsel’s clear intent, right at the beginning of the deposition, was to intimidate the witness by raising the specter of criminal proceedings and government debarment of Stratus. The questioning had no legitimate purpose. It did not concern Mr. Beltman’s knowledge concerning facts relevant to the proceeding. It was blatant, naked intimidation that violated Local Rule 30.3(A)(5)."

"At the October 6, 2010 deposition of Mr. Beltman, a third party to the Lago Agrio case, Chevron attempted to embarrass, humiliate, intimidate, harass, and threaten Mr. Beltman, questioning him about his knowledge of federal criminal statutes, about RICO, about the Hobbs Act, about other courts’ decisions in this case concerning crime fraud, about government debarment of contractors, and other topics that have nothing whatsoever to do with legitimate questioning in this case. These blatant intimidation tactics have no place in this case and fall below the standards of professional conduct required by the Local and Federal Rules. Stratus and Plaintiffs respectfully submit that Chevron should be sanctioned…"

"This court in Colorado was willing to stand up to Gibson Dunn's bullying and abusive tactics. Chevron is using these tactics as part of its campaign to cover up its own fraud and wrongdoing in Ecuador."

Of course, this isn't the first time Andrea Neuman's conduct during a deposition in this case has been questionable. As I wrote on this blog a few weeks ago, after a judge allowed Chevron to depose another plaintiff's expert named Bill Powers, a lawyer for the plaintiffs asked for the opportunity to cross-examine Mr. Powers for a few minutes, a standard practice. But Neuman and her Gibson Dunn colleagues vigorously objected, becoming agitated and throwing out a slew of ridiculous excuses, saying the office was closing, the cameraman shooting video of the deposition had to pack up, and then claiming "we literally have to leave the building."

Finally, when none of these things came to pass, the plaintiffs cross-examined Mr. Powers who explained that the toxins released by Chevron into Ecuador's Amazon rainforest amounted to "30 times the quantity or the volume of crude that was spilled in the Exxon-Valdez disaster."

But Andrea Neuman's questionable conduct isn't confined to depositions. In fact, apparently, she isn't above flat-out lying to the media about the facts of the case.

When a federal judge ordered Chevron's self-proclaimed 'dirty tricks' guy in Ecuador Diego Borja to sit for a deposition about his attempts to undermine the trial by making secret recordings of the presiding judge, Neuman lied to a reporter covering the development.

Neuman was quoted in the legal outlet San Francisco Daily Journal saying that "the [Ecuador trial] judge… was seen on these authenticated tapes soliciting a multimillion-dollar bribe."

But as The New York Times reported, “No bribes were shown in the tapes” and “It is not clear from the recordings and transcripts provided by Chevron whether any bribes were paid or whether Judge Núñez and Ms. Correa were aware of plans to try to bribe them.” Ms. Correa, Ecuadorian President Rafael Correa's sister was mentioned briefly and randomly in the recordings.

Of course, while it's nice that The New York Times points that out, the reporter seems to miss the critical point that any "plans to try to bribe them" were devised by former Chevron employee Diego Borja and his shadowy American sidekick, a convicted felon and drug trafficker named Wayne Hansen. Now Borja is hiding out in his home minutes away from Chevron's headquarters in San Ramon, CA., waiting to hear when he'll have to spill the beans about his illegal operations to corrupt the trial in Ecuador, and what role Chevron's executives and outside law firms played in their planning.

I've speculated on this blog about whether Borja's testimony could implicate Chevron bigwigs like General Counsel Hewitt Pate or lawyers like Tim Cullen from Jones Day, another of Chevron's outside law firms. Borja held meetings with Chevron lawyers at Jones Day's offices in San Francisco in the midst of his spy-video dirty tricks operation. If he implicates Chevron execs and top lawyers from the company's outside law firms, we may see investigations under the Foreign Corrupt Practices Act.

Something like that would be a whole lot more serious than the kind of sanction Gibson Dunn's Andrea Neuman just received for her abusive questioning. But with Gibson Dunn's history of representing the worst of the worst of corporate offenders and bragging about "innovative rescues" of "clients in deep trouble," we should keep an eye on Ms. Neuman and her attack dog legal colleagues.

Read more about Chevron and their Gibson Dunn lawyers' scorched-earth legal, political, and PR strategy to evade accountability in Ecuador in this briefing paper published by Amazon Watch: UNDERSTANDING RECENT DEVELOPMENTS IN THE LANDMARK CHEVRON-ECUADOR CASE