In the Ecuadorian Amazon region ravaged by decades of Chevron's reckless oil operations, almost everyone has a story of oil's ill affect on his or her life. Indigenous leaders talk about the unraveling of their traditional cultures due to the onslaught of Big Oil in their ancestral lands. Campesinos speak of coming to the region hoping for oil industry jobs, only to find sickness and suffering caused by constant exposure to toxins. And in this interview, a former oilfield worker talks of the helplessness he felt at being ordered by his bosses at Texaco (now Chevron) to dump toxic waste directly into the rainforest environment, day after day.

Jhinsop Martinez Erraez was only a teenager when he began working at "Dureno Uno," the first oil well at Dureno, east along the Aguarico river from the oil boomtown of Lago Agrio in the traditional territory of the Cofan people.

In the interview he explains how the toxic byproducts of oil drilling were disposed, saying, "The wastewater was dumped into a ravine, a stream, without any treatment at all."

He goes on to explain:

And at that time these were mountainous lands, pure rainforest existed, rich in flora and fauna; and this destroyed everything. And since we were just simple workers we couldn’t say anything.

Over the course of its time as the sole operator of the oil concession in the northeastern rainforest region in Ecuador, on top of spilling millions gallons of crude and abandoning hundreds of waste pits filled with poisonous sludge, Chevron dumped more than 18 billion gallons of toxic wastewater directly into rivers and streams depended upon by thousands of men, women, and children for drinking and bathing.

Besides the testimony of a man like Jhinsop, how do we know? How do we know that other workers at other wells drilled throughout the sprawling Ecuadorian oilfields were operating in the same deliberately reckless fashion? In fact we know this from the company's own audits, commissioned as it was preparing to depart Ecuador. 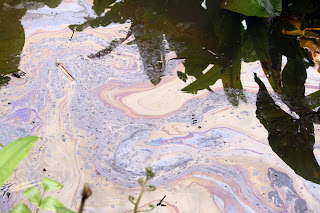 In the meantime, Chevron's lawyers and junk scientists continue to claim that this systematic daily poisoning of the region's waters over decades posed (and poses) no threat to the people living there.

I wonder what these Chevron big-wigs would say if the same water that runs in the streams through Chevron's former dumping grounds was running from their taps at home.