When 60 Minutes producers called Chevron to let them know they were planning an investigative report on its oil disaster in Ecuador's Amazon rainforest, you can be sure the oil giant's PR department went into overdrive.

Before the piece aired, the company hired a former CNN reporter who peddles his previous credibility to make corporate videos for companies like Chevron. The video, with similar length and tone as a standard 60 Minutes segment was designed to look like a news report – "this is Gene Randall reporting" – and designed to respond to what Chevron knew the 60 Minutes piece would inevitably contain. The oil giant posted it on its website and Youtube three weeks before the 60 Minutes report aired on CBS.

The New York Times published an article about the effort, with a long headline: 'When Chevron Hires Ex-Reporter to Investigate Pollution, Chevron Looks Good'. The article questions Chevron's use of "journalistic devices" in producing the video, and whether the company was trying to fool the casual observer. An executive producer for 60 Minutes complains that the ex-reporter got access to Chevron experts – like Chevron's top scientist – that were denied to him.

When the 60 Minutes report finally aired, it was seen by millions, and most viewers were probably horrified when Chevron spokeswoman Silvia Garrigo said with a grimace, "there's naturally occurring oil on my face. That doesn't mean that I'm going to get sick from it."


In the end, it didn't go well for Chevron.

But as one of the largest companies that has ever existed in history, Chevron has astonishing resources to put behind its effort to evade responsibility for contamination in the Amazon. Not only would its PR department work to get out new stories, it was even going to devote time and energy to fighting the 60 Minutes story after the fact.

They reached out to Martha Hamilton at the Columbia Journalism Review. In an 'audit' of the 60 Minutes report, she writes:

A few months ago, Chevron turned to The Audit, the business-news desk of the Columbia Journalism Review. As part of its mission of covering business news and its upholding standards, The Audit from time to time has taken up complaints of business news subjects who feel they’ve been treated unfairly by news outlets. Now we’ve formalized the process with the creation of a dedicated Audit Arbiter. That would be me. In each case, I’ll look at the facts and render a judgment.

She goes on to say:

But first let’s be clear what it is I’m judging. I’m not rendering a judgment on whether Texaco/Chevron is responsible for the pollution.

It tuns out that Hamilton thinks Chevron was treated unfairly. The only problem with her take on the journalism is that with the exception of a few minor things she could have found in even the most rigorous of reports, her criticisms are all based on Chevron's complaints that their viewpoint didn't come across properly.

Actually, one of the comments on the article nails it:

You set a very troubling precedent by offering yourself--and CJR--as an arbiter of investigative journalism, then accepting the subject of the investigation's version of things as incontrovertible fact.

And it turns out to be a serious problem, because Chevron lied to Hamilton and the Columbia Journalism Review.

In her 'audit', Hamilton looks at a part of the 60 Minutes segment in which correspondent Scott Pelley visits a man who lives next to a former Texaco well site called Shushufindi 38. In a moment that passes very quickly, Pelley, referring to the Ecuadorian man, narrates, "he says the pollution leaked into his water well."

Hamilton argues that it's completely unfair to allow the man to claim that the oil pollution may have seeped into his well water.

She then says, "...Petroecuador operated the site after Texaco left the country, according to Chevron."

But in fact, according to court records, only Texaco operated the well site, which Texaco closed in 1984. 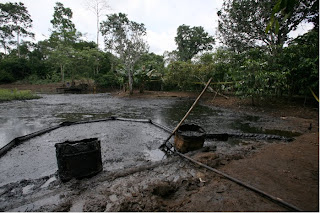 Even the company doesn't really try to argue anymore against the fact that Texaco (now Chevron) operated in a reckless and deliberately substandard manner which polluted the environment for nearly three decades.

But Chevron has learned that, when faced with inconvenient facts, they can hire high-powered lobbyists to try to get the US government to pressure Ecuador to crush the trial. Or have their in-house and hired-gun public relations spin-masters confuse the public and media.

Or they can just lie.

For more on Chevron's lies, and what Hamilton and the CJR missed, read this post on The Chevron Pit blog.

Han Shan is Coordinator of the Clean Up Ecuador Campaign