Chevron in Ecuador: The Hypocrisy is Deafening

Yesterday, Chevron's 'Amazon Post' blog posted a story about how a "Chevron technical team" –  operating for some mysterious reason in the Amazon rainforest region of Ecuador – discovered two oil spills in the region.

The author of the post – that is, Chevron – wonders why there hasn't been an outcry by the Amazon Defense Coalition (Frente de Defensa de la Amazonia) – the organization of the plaintiffs who have filed suit to demand Chevron clean up massive oil contamination the company left in Ecuador over decades – or by U.S.-based solidarity organizations Amazon Watch and Rainforest Action Network.

It's more of Chevron's ridiculous 'gotcha!' PR spin and it's more than just hypocritical– it's insulting.

First of all, the Amazon Defense Coalition – or the Frente – as well as indigenous groups throughout the area have in fact gone after Petroecuador and other oil companies operating in the region on numerous occasions, demanding clean-up of spills, and a general increase in responsible operations.

Ironically, the photos Chevron posted on the blog show remediation of the spills underway. Note the caption below the photo.

In the early 1990s, as Chevron (then Texaco) was shutting down its operations in Ecuador, the company commissioned two audits to assess the environmental impacts of its operations. Texaco had been drilling for nearly three decades.

In terms of spill prevention and control, the other of Chevron/Texaco's own audits, performed in this case by a multinational 'geotechnical' company called Fugro McClelland, revealed,

“[t]here was no indication of a pipeline monitoring program. Other than a vacuum truck, there was no equipment observed for containment and control of spills.”

The audit goes on to say:

“Spills which were judged as degraded or heavily degraded were attributed to TEXPET’s [TEXPET = Texaco Petroleum, now Chevron] operations from 1964 to 1990 ," ... "In addition, spills fresh or degraded which were the result of improper equipment design were considered the responsibility of TEXPET.”

This last part is also at the core of the case against Chevron. What the company's own audit is essentially saying is that, spills caused by improper equipment design – even if occurring after the departure of Chevron/Texaco – are still the responsibility of the company.

“Facility modifications will be required at those facilities to bring the discharges into compliance with the current regulatory standards.”

Back to the spills that a "Chevron technical team" discovered recently. Just as the company has spent tens of millions of dollars on high-powered lobbyists, expensive PR firms, and the best lawyers money can buy, it seems that Chevron would rather spend its resources in this case sending a crew to capture photos of recent oil spills (in the midst of remediation) than creating a plan to clean up the massive oil contamination it has abandoned in the region for decades.

Chevron's post refers to one of the spills occurring "in the heart of Cofan indigenous country." As readers of this blog may recall, Emergildo Criollo is a Cofan leader who recently traveled to Chevron's headquarters and even the home of Chevron's new CEO, John Watson. Emergildo wanted Mr. Watson, who has never visited Ecuador, to simply hear his story. 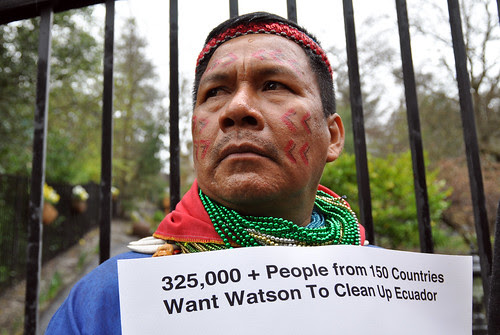 And it's a heartbreaking story – of how, in the 1970s, when Chevron/Texaco was the sole operator of the oil fields, black crude literally covered the rivers that his tribe once relied upon for fishing, drinking, bathing. He recalls how two of his children died after coming into contact with massive oil spills that Chevron/Texaco never even made a pretense of remediating. Of course, when Emergildo went to Chevron's headquarters in California, Chevron sent only its PR people to talk with Emergildo, and Mr. Watson couldn't be bothered to hear his heartbreaking story.

So thank you, Chevron/Texaco, for pointing out these recent spills. It is indeed infuriating to see the way in which oil development in Ecuador's rainforest region continues to pollute the environment, and taint the water.

But let us not forget, Chevron. Over decades of operations in the Ecuadorian Amazon, you have admitted to dumping 18 billion gallons of "produced water" – the toxic wastewater that comes up from underground with the oil during drilling– into Amazon rivers and streams. According to your own audit [HBT AGRA], “Produced water has historically not been tested prior to disposal…” and “Produced water is being discharged to the environment in all cases.”

And it's estimated you spilled more than 17 million gallons of crude, apparently without any kind of "spill contingency plan." And you carved out over 900 open-air, unlined toxic waste pits around your well sites, that were designed to overflow and allow toxins to contaminate groundwater. Your own testing during the trial shows that even the tiny percentage of waste pits you claim to have remediated in the mid-1990s with the hopes of having the case dismissed still contain illegal levels of toxic contamination. In other words, not only was your 1990s "clean-up" designed to only address a pathetically minimal portion of your contamination, it was also a fraud.

Chevron, wondering why the communities who have long suffered from your toxic mess aren't up in arms about recent spills that Petroecuador is in the midst of remediating is like wondering why someone dying of cancer isn't more worried about a nasty bug bite.

As I said before, Chevron, it's cynical and insulting. And your hypocrisy is truly deafening.