On Tuesday, reporters packed the Quito offices of the Amazon Defense Coalition (ADC) to hear the latest revelations about Chevron's attempts to corrupt the trial over its contamination of the Amazon rainforest region of Ecuador. The ADC released a shocking whistleblower report about longtime Chevron contractor Diego Borja. Today, members of the ADC held another press conference in Lago Agrio, the town in Ecuador's Amazon where the court is in the final stages of the trial.

The ADC released recordings made by a friend of Borja's, in which Borja threatened to reveal damaging evidence "cooked" by Chevron in the environmental trial in Ecuador unless he received enough money for turning over to the oil giant secret videotapes he shot of bribery attempts connected to the case. He concocted the contrived 'corruption scandal' (that Chevron breathlessly announced in late August) with an American convicted felon early last summer.

Borja also told his whistleblower friend that he had incriminating evidence against Chevron stored on his iPhone and in an undisclosed location in Ecuador that he could use as leverage if the company betrayed him. 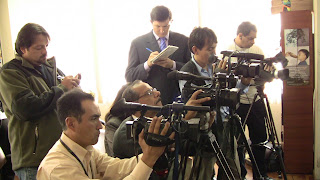 At the Quito press conference were all the major Ecuadorean outlets, along with wires such as EFE (the largest Spanish-language news wire), Agence France Presse, Dow Jones, and others.

The speakers at the press conference were Luis Yanza, the community coordinator of the legal action against Chevron, Pablo Fajardo, the lead attorney, and Juan Pablo Saenz, an attorney on Fajardo's team (Fajardo & Yanza received the prestigious 2008 Goldman Environmental Prize for their advocacy).

Luis Yanza called on Chevron to investigate and disclose the 'evidence' Borja has on his iPhone.

During the press conference, Pablo Fajardo focused much of his attention on the disturbing disclosure that Diego Borja had helped to set up four companies to appear independent of Chevron, while directly assisting Chevron's legal defense team. He pointed to the fact that Borja's wife Sara Portilla worked for Chevron for four years and also represented Severn Trent Labs (STL), a U.S. laboratory Chevron described as "independent" that the company used to test field samples for contamination. Borja and his wife both signed 'chain of custody' documents with the Lago Agrio court that showed how the samples moved from the contamination site to the testing lab. 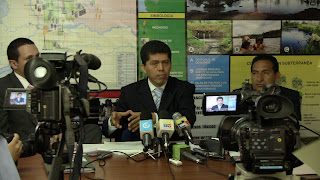 It's an enormous indignation that one feels, that I feel, that a company as large and powerful as Chevron Corporation, has resorted to the extreme– committing crimes as grave as this one… destroying the honor our country, to not care that there are tens of thousands of Ecuadorian citizens, Indigenous groups, campesinos, women, children, dying due to toxins left by Chevron. This criminal and perverse company, in order to avoid one crime, they commit others to try to cover up the first one, such as this act of corruption. It's unfortunate that a company as big as Chevron continues to violate human rights in Latin America. In Ecuador, it's causing the death of hundreds of people and still, there aren't any judges who order that Chevron respect the judicial system and respect the life of human beings.

It's interesting, that Mr. Borja is in his world– he lived in Ecuador, comfortably. He had four companies created by Chevron itself so that he could administer them. He worked for Chevron. He made money at the expense of the people of the Amazon, and now today he's comfortable in San Francisco* but one day he'll have to pay for the crime he committed.

*Chevron has kept Diego Borja and his family hidden away at a $6,000-a-month house located just a few minutes from Chevron's corporate headquarters in San Ramon, California, in the San Francisco Bay Area.