When Current Chevron CEO Dave O'Reilly announced his 'surprise early retirement' on September 30th, it didn't really surprise everyone. In fact, a lot of people couldn't help but wonder if he didn't think he was getting out just in time... before a judgment comes down in Ecuador which could find Chevron liable for up to $27 billion in damages for massive contamination of the Amazon.

Of course, supporters of the Amazonian communities pointed out that Mr. O'Reilly's legacy would forever be marred by his inability to find a solution to the horrific damage left by Texaco and inherited by Chevron when it absorbed the company in 2001.

When Chevron disclosed Mr. O'Reilly's plans to retire, it was also announced that John Watson would succeed him as CEO on January 1, 2010. Watson is the current Vice Chairman of Chevron Corporation’s Board of Directors, and was the chief architect of Chevron's deal to purchase Texaco. Here is a guy who is intimately familiar with Texaco’s oil pollution in Ecuador’s Amazon–– and knew all about it when he helped Chevron assume ownership of Texaco, and of the liability for its mess in the rainforest.

Watson made his debut in the nation's capital yesterday, with a lunchtime speech to the Chamber Foundation at the U.S. Chamber of Commerce, right behind the White House. There to greet Mr. Watson were activists from Amazon Watch, our allies at Rainforest Action Network, and other supporters of justice for rainforest communities in Ecuador.

As we prepared our materials and headed for the event, we worried about whether anyone would show up in the middle of a breezy, rainy Tuesday. But with outreach to local supporters and people who had recently been moved to help after seeing CRUDE – the documentary about the 'Amazon Chernobyl' which opened in DC on Friday – we managed to recruit a solid group of supporters who would brave the rain, and for a while the weather even cleared.

Mr. Watson arrived just after our group had gathered for a quick overview of our plan–– to be an obvious presence, to keep the Ecuador issue front-and-center, to educate the influential people who would be attending this event, to show Mr. Watson that we're a reasonable bunch, and invite him to turn a new page in Chevron's approach to the ongoing problem in Ecuador. 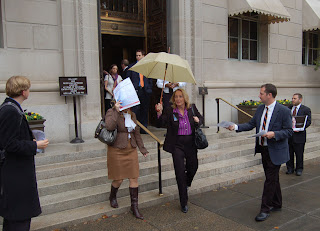 I was standing at the steps of the building with a copy of a mock Washington Times article dated a few days into Watson’s tenure in the first week of January. With the headline reading, “Chevron Announces Plan to Resolve Ecuador Oil Pollution Case,” the article imagined a new approach for Chevron under the leadership of Mr. Watson. I tried to hand one to Mr. Watson and his entourage as they swiftly moved from a dark SUV to the entrance but security brushed me aside.

We continued to hand the article to investors, media, and industry peers as they arrived, and some of our colleagues entered the event to get a seat, begin distributing our materials amongst attendees, and see how they could engage with Mr. Watson.

Meanwhile, outside, the group spelled out “Mr. Watson, What Will You Do About Ecuador?” with a few dozen big poster-boards. Mr. Watson would have to see the sign for himself on his way out but we tried to provide a big enough presence that he would be plenty aware of it. 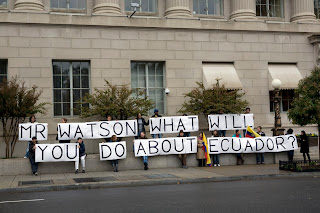 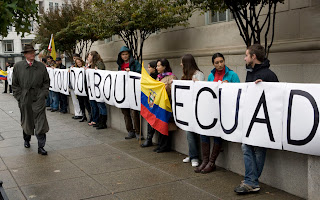 I spoke briefly with the head of security and with some guards who shook my hand and thanked me for being polite. I explained that we wanted merely to open a dialogue with Mr. Watson, and see for ourselves whether his approach might be different from that of his predecessor. We hadn't come to raise a ruckus–– at least this time.

I slipped my stack of flyers into my belt beneath my sport coat and headed into the event, escorted by a security guard who said he just needed to "make sure I had a ticket" (I did). I milled around a bit and saw several people clutching our article, and several people obviously talking about it in hushed tones. I also watched as a red-faced man looking none-too-pleased scurried by with a handful of them. He was wearing a Washington Times badge (it was soon announced from the podium that The Washington Times was the media partner for the event).

Eventually, I took a seat, gulped some iced tea, and chatted with some of the people at my table. I told the friendly man from the Institute of Museum and Library Services exactly why I was there as I filled out the card on the table with a question to be posed to Mr. Watson.

Before long, A Chamber of Commerce executive welcomed Mr. Watson with an introduction that included knowing references to the tyranny of regulation and "resource nationalism," and the threat of meaningful climate legislation.

Mr. Watson took to the podium and began, predictably, by talking about what an incredible job current CEO Dave O'Reilly has done and essentially reassuring everyone in the room that he would do his best to continue the path laid out before he arrived.

His speech was mostly a real yawner. He said exactly the kinds of things you would expect an oil company executive to say to a conservative pro-business crowd at a luncheon in the heart of Washington. He talked about the noble engine of American free enterprise driving the global economy and the need to turn on the lights in the laboratory of innovation and lift the weights that are drowning this giant mixed metaphor so that it may launch into the 21st century, etc., etc.

Then he turned serious, and said, "There is a concern that burning fossil fuels has an impact on the climate."

Which sounded to me like, "well, perhaps climate change is real (wink, wink) but we're not exactly going to go worrying about it" and then proceeded to say that a 20% reduction in greenhouse gases by 2020 would lead us assuredly down a "straight path to a pre-industrial society." He also said that "we will convert away from conventional energy not over years or even decades, but over generations." He said this in a way that sounded as if it was meant to be reassuring. I drew a deep breath.

He went on to assail taxes and the threat of "resource nationalism" just as the woman from the Chamber had, and proudly noted the benefit of the "transparency" with which "American oil companies operate overseas." This is where I would have liked to guffaw. But I held it in. We weren't there to make a scene.

Finally, he concluded and received gentle and self-satisfied applause from the crowd. A moderator got up to read him the questions collected from the tables around the room.

Overall, the questions and answers provided no more insight into his and Chevron's plans than his speech had.

But the third question was mine.

Well, ours, actually. I had been looking around and noted that my four other colleagues were frantically scribbling question after question and calling over the Chamber staff who dutifully carried them to the moderator. But it sounded as if all our questions had been mashed into one.

I missed precisely how it was put but it was something along the lines of, "Chevron is involved in litigation in Ecuador [sad face] and well, what will you do to deal with this annoying problem?"

Mr. Watson took a deep breath and said, "It is important to go back and look at the history of this case." Meanwhile, I fumbled with my phone to try and get his answer down verbatim. I hit record [listen to the answer].

"At the time of [Texaco's] departure, there was an assessment of remediation work that needed to be done. The government refused to fund it and assigned Texaco a share of that remediation. Texaco did its work, got full sign-off from the government, got full sign-off from every authority available in Ecuador. Fast forward a few years, Petroecuador, who has been operating now for some 20 years, not only never cleaned up its share of the environmental remediation but also has continued to spill in devastating style. So you see pictures of environmental devastation in Ecuador and it's real, it's just not ours. What we're seeing that I think everyone in the Chamber should be concerned about is a trend where U.S. trial lawyers conspire with corrupt governments to try to bring actions in this country. Now this case has resulted in some wild claims in the Ecuadorian courts of some 27 billion dollars in damages. They're preposterous claims with no basis in science. And we're heading toward a determination and judgment in Ecuador. We'll exhaust our legal remedies there, and if we lose, and if enforcement is sought elsewhere, we will fight them very vigorously."

Well, that was anti-climactic. It's the same old argument that Chevron has been peddling for years now, despite it losing nearly every step along the way in court, and having had giant holes punched in it by independent analysts and journalists who have investigated the case.

So there it is. Mr. Watson is toeing the company line.

It's not surprising at all. He is very close to current Chairman and CEO O'Reilly and won't truly have any independence to take a new approach until he's the man at the top. And of course, even then, I wouldn't advise anyone to hold their breath.

But with every major change at Chevron comes an opportunity for change in the way the company deals with its mess in the Amazon. And we'll keep pushing whenever we see an opportunity, for the 30,000 indigenous and farming people in the rainforest of Ecuador whose environment, communities, and lives have been impacted.

Many thanks to everyone who came out yesterday, and to Chris Eichler for use of his photos.

Born and raised in Baltimore, Han Shan is a human rights and environmental justice campaigner living in New York City. He is currently serving as an organizer with the Clean Up Ecuador campaign for Amazon Watch.