Chevron to Get an Award? 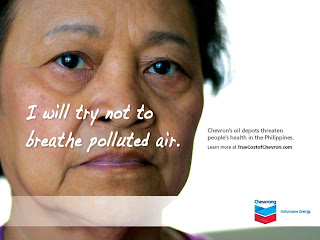 State Department selects Chevron as finalist for award: what were they thinking?

Last May Chevron spokesman Donald Campbell summed up the oil giant’s corporate ethics and general litigation strategy in a revealing statement about the $27 billion environmental lawsuit resulting from decades of contamination in the Ecuadorian Amazon: “We’re going to fight this until hell freezes over,” Campbell told reporter John Otis. “And then we’ll fight it out on the ice.”

The image of a corporate baron skating out over the inferno’s frozen surface with protruding paunch contained in a bulging three-piece suit, monocle squeezed into a clinched eye-socket, to slam his fists into a group of stunned judges and plaintiffs is, well, comical.

Interesting then that a corporation with such a blatant track record and open policy of attempting to obstruct legal proceedings against it would be named a finalist for the U.S. State Department’s Award for Corporate Excellence.

The State Department’s announcement of the finalists cites Chevron’s having been chosen for its work: “in the Philippines for supporting projects that address basic human needs, education, small business development, and the environment, establishing public-private partnerships, and donating funds towards research and training of infectious diseases (sic).”

Perhaps the award nomination is a wink and a nod from the State Department that they are watching Chevron’s back, even though they have not formally supported the corporation’s efforts to pressure the Bush and Obama administrations to cancel Ecuador’s trade preferences?

Chevron “conducted a high powered lobbying campaign to persuade the Obama administration to cancel the preferences as a way of exerting leverage over the government of President Rafael Correa to settle the case on favourable terms.”

But the campaign was unsuccessful; in early July the Obama administration extended the trade benefits.

But the winking and nodding goes on. Chevron pledged some $5 million to the State Department’s hurried efforts to construct a $61 million pavilion at the up-coming World Fair in China. Soon thereafter, on October 1, the State Department announced Chevron as a finalist for the “Corporate Excellence” award.

The ironies abound. The organizer of the awards described them as “motherhood and apple pie,” a description that hardly fits a corporation charged in court for one of the largest and most egregious environmental disasters in history.

Let’s take a closer look at the company’s record in the Philippines where they have supposedly been, it is worth repeating: “supporting projects that address basic human needs, education, small business development, and the environment, establishing public-private partnerships, and donating funds towards research and training of infectious diseases (sic).”

According to the 2009 Chevron Alternative Annual Report (The True Cost of Chevron, pp.38-39) Chevron has been “circumventing the law” in the Philippines for nearly a decade by ignoring the December 28, 2001 Manila City Ordinance 8027 that requires the company to either relocate or scale down its operations in order to prevent potential terrorist attacks (the depot is close to the presidential palace and a large residential population) and health risks to residents who live side-by-side with the huge Chevron depot and fueling stations. Chevron sued to have the ordinance repealed, but the Philippine Supreme Court in March 2007 and order the Chevron depot to be closed within six months. Chevron appealed and on February 13, 2008 the court upheld its earlier decision. So Chevron appears to have switched tactics to lobbying the Manila City Council to write a new ordinance, 8187, that would allow Chevron and its depot to stay put. Now that ordinance is the subject of intense controversy in Manila, with a new citizen’s coalition formed to fight it in the courts and in the streets, gathering 10,000 signatures on a petition to hold a plebiscite.

Seems like the theme here is this: fighting out on the ice. And that, for the State Department it would seem, warrants a motherhood-and-apple-pie “Award for Corporate Excellence.”

A State Department representative did not respond to a request for comments.

"We were shocked to hear of Chevron's nomination," said Aileen Suzara, of the Filipino-American Coalition for Environmental Solidarity (FACES). "Thousands of Filipinos and Filipino-Americans have been actively campaigning for years against this polluting corporation, which endangers the health, environment and safety of over 83,000 Filipinos living fenceline to their Metro Manila depot. Chevron's corporate donations to a local project are no replacement for it's destructive impacts on communities in the Philippines and around the world. We urge for this nomination to be reconsidered and removed from the awards list."

"Chevron's operations in the Philippines have and continue to harm public health, the environment, and public safety," said Antonia Juhasz, the Director of The Chevron Program at Global Exchange. "Chevron has turned a blind eye to the problems and needs of the local community and has even ignored the rulings of the country's Supreme Court. Unfortunately, such a response is typical of Chevron's operations world-wide. Rather than award Chevron a prize, the U.S. State Department should be investigating the company's deeply problematic operations in the Philippines and around the world."

The acclaimed documentary Crude opens in Washington DC next week. It portrays the saga of 30,000 rainforest inhabitants waging an epic battle to bring Chevron to account for its toxic legacy. The State Department officials who see the film will likely be left with a taste in their mouths quite different that apple pie. That’s likely to give Chevron a “chance in hell” to receive this or any other award.

[After this article was posted, State Department spokesperson, Kerry Humphrey responded to an earlier email request for comment with the following:

"The Secretary of State’s Award for Corporate Excellence (ACE), established by the State Department in 1999, recognizes the contributions U.S. businesses make in communities worldwide.

The selection process for ACE involves a thorough vetting process.

Chevron was selected as one of 11 ACE finalists by the interagency ACE Committee. The winners of this year’s ACE have not yet been announced. The announcement will be made in a ceremony at the State Department on December 9, 2009.

Chevron was nominated by American Embassy Manila for supporting projects that address basic human needs, education, small business development, and the environment; establishing public-private partnerships; and donating funds towards research and training to prevent the spread of infectious diseases in the Philippines.

For more details about the ACE, including details on the criteria and the news release and video announcing all the finalists, please see www.state.gov/e/eeb/ace."

FACES also put out a new press release and an open letter to Secretary of State Hillary Clinton addressing the nomination:

"FACES open letter to Secretary of State Hillary Clinton highlights Chevron’s toxic operations in the Philippines. 'Chevron Philippines is no corporation to be proud of, not by the US or the Philippines. A little corporate donation to a local project does not replace the many lives lost or harmed due to their toxic operations in the fenceline communities of the Manila oil depots, as well as around the world where they operate,' said the letter."]