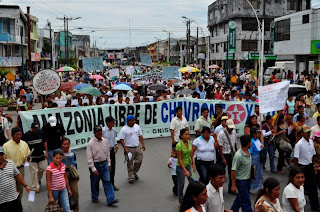 Over 400 people from indigenous and farming communities around Lago Agrio, Ecuador, marched to a toxic dump site today to protest Chevron's on-going attempts to derail the $27 billion lawsuit that will soon come to a close after more than 16 years of courtroom struggle.

Hoisting a coffin filled with effigies of Chevron executives and lawyers on their shoulders, protesters marched to one of the oil waste pits that Chevron claims to have remediated. They lowered the coffin into the still contaminated, oily ground, symbolically burying out-going Chevron CEO David O'Reilly and other masterminds of Chevron's legacy of corruption. The “burial site” is just one of over 900 open waste pits left behind by Texaco (now Chevron) in 1992 filled with toxic wastewaters.

“We the people in Ecuador want to say that this supposed development is killing our way of life,” said Justino Piaguaje, President of the Secoya people. “We are enclosed in this small territory that does not guarantee life to our people because these territories are contaminated. To Chevron’s new president, we want to send a message that we need remediation urgently. It’s not necessary for people to continue dying. We want him, John Watson to come to Ecuador and see for himself what has happened to our people.”

“Chevron has repeatedly tried to avoid responsibility for the devastating contamination and human suffering caused by their oil operations. But today’s protest of hundreds in Lago Agrio, Ecuador shows that the people here will continue to fight. With new CEO John Watson assuming leadership on December 31, Chevron has an opportunity to start anew and clean up its mess in Ecuador,” said Maria Lya Ramos, Rainforest Action Network Campaign Director, who was present at the march.

The protest comes at a time when Chevron is facing increasing international scrutiny about its handling of what experts are calling the "Amazon Chernobyl." Just this year, Chevron has lobbied the United States Trade Representative to cancel trade preferences between Ecuador and the U.S., filed an arbitration claim against Ecuador's government at The Hague, and unleashed a campaign to implicate the Ecuadorian judge, Juan Nuñez, in a bribery scandal.

“Chevron has ramped up an assault on Ecuador's judicial system over the past few months with ready-made video scandals that have failed to produce any evidence of foul play within the courts,” said Mitch Anderson, Amazon Watch Corporate Accountability Campaigner. “Chevron's sole intention appears to be to lay the groundwork for future appeals and delay a final decision as long as possible; a legal strategy of undermining the rule of law in Ecuador to buy time.”

“The Toxi-videos are just the latest way that Chevron is trying to corrupt the trial by creating false evidence,” said Luis Yanza, a plaintiff who was recently profiled in the acclaimed documentary Crude, now screening in the United States. “Those who committed the crime of the Toxi-videos and the masterminds behind those videos should be investigated and punished. We need to be more alert than ever because Chevron is on its last breath.”

Chevron's liability in the lawsuit stems from what may be the worst oil-related contamination on the planet and was inherited when Chevron, under O'Reilly's watch, paid $35 billion for Texaco in 2001, apparently without accounting for a possible adverse judgment in the case, which was pending at the time in U.S. federal court.

O'Reilly ignored the warnings about Texaco's Ecuador liability, which at the time was estimated in the billions of dollars. The lawsuit asserts Texaco deliberately dumped more than 18 billion gallons of toxic waste into the Amazon when it operated 356 oil wells in Ecuador from 1964 to 1990, poisoning an ecosystem the size of Rhode Island, decimating the lifestyles of six indigenous groups and causing an epidemic of cancers and other oil-related illnesses.

Photographs from the march available here.

Mitchell Anderson is a lead advocate in the Clean Up Ecuador Campaign as the Corporate Accountability Campaigner at Amazon Watch. Mitch works closely with organizational partners on the ground in Ecuador and has first-hand knowledge of the devastation left by Texaco in the Amazon. Prior to joining Amazon Watch, Mitch worked in Chiapas, Mexico, coordinating a regional human rights investigation, which sought to document and expose the effects of militarization on the collective human rights of indigenous communities. Mitchell has also worked as a freelance journalist and is a certified Spanish-English interpreter.