A Truth No Chevron Public Relations Can Hide. 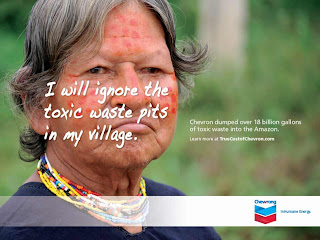 Chevron not happy about the media reporting the facts.

What will they think of next?! Chevron, everyone’s favorite forward-thinking (we know they do their best to forget the past) oil company, is opening up new fronts in public relations every day! Twittering, blogging, and... recruiting bloggers to write your propaganda for you? That certainly appears to be what Chevron’s up to. Take this side-by-side comparison of the recent press coverage devoted to the Ecuador case cited on Amazon Watch’s ChevronToxico site, versus the “In The News” sidebar on Chevron’s very own Ecuador-themed blog, The Amazon Post:

On ChevronToxico.com, we find links to articles in the past 4 months from sources that include: Christian Science Monitor Associated Press and again New York Times and again Bloomberg San Francisco Chronicle National Public Radio 60 Minutes (CBS) The Washington Post The Wall Street Journal All of the above are news stories, by the way, which examine both sides of the ongoing dispute. They are not editorials or otherwise opinion pieces.

A few blogs, some opinion columnists, and hey, at least Chevron can take consolation in good press from the Wall Street Journal and Reuters, undoubtedly reputable news sources, right? Not so fast: An examination reveals that the WSJ and all four Reuters pieces are about Ecuador, but none contains a single mention of Chevron or the lawsuit against it!

(troubling note: Recently The Amazon Post blog as been highlighting news regarding false accusations of Ecuador harboring terrorists. There is no reference to the Chevron lawsuit and it has absolutely nothing to do with the trial. Seems like a deeply disturbing attempt to deflect the real issues between Chevron and these Ecuadorian communities.)

What about the section of Chevron’s own corporate site devoted to Ecuador? A sparse “related articles” section appears to consist almost entirely of opinion pieces, mostly from business publications, or smaller newspapers with a well-known political slant. If you don’t live in D.C. you may not have heard of The Washington Times – I hadn’t – but that link provides a good illustration of the type of coverage Chevron is settling for.

So what on earth is going on here? The second-largest U.S. oil company, with a sophisticated multimillion-dollar P.R. machine, has to rely on biased bloggers to get its side of the Ecuador story heard by the general public?

Turns out Chevron didn’t just stumble into all this attention from the blogosphere either – it actually paid to bring several bloggers on a trip to Ecuador! This really raises the question: If Chevron’s going to spend that money, why not spend the money on giving a tour of the affected region in Ecuador, and Chevron’s account of the lawsuit, to high-profile, well-respected journalists? There’s certainly no shortage of them interested in covering what may be the largest environmental lawsuit in history.

One reason is that mainstream journalists have this pesky habit of actually talking to representatives of both sides. In the case of Ecuador, this would mean interviewing people like Donald Moncayo, Emergildo Criollo, or Manuel Salinas. People who would have talked about the family members who died of cancer after their drinking water was contaminated in the 1970s and 1980s – back when Texaco (now Chevron) was the only company operating oil wells in the area.

CBS’s 60 Minutes piece, which Chevron found so sorely unfriendly, in fact interviewed spokespeople from both sides extensively. The report clearly presented Chevron’s claims about the lawsuit – in fact, in much more depth than most print articles about the case have. But reporter Scott Pelley, doing his job as a journalist, also pressed Chevron attorney Silvia Garrigo to defend those claims, and she didn’t fare so well. Chevron can hardly cry “Media bias!” when its executives refuse to discuss the case, and the lower-ranking spokespeople it appoints pretty much discredit themselves.

I guess when your crimes are so obvious, so expansive, so profound, no amount of PR money can hide the truth.

Daniel Herriges has worked with Amazon Watch on the Clean Up Ecuador Campaign since 2008, as a Program Assistant. In his work Daniel has studied and written extensively on the history of the Chevron case in Ecuador. Daniel has a B.A. from Stanford University in Human Biology, with a focus in Conservation and Sustainable Development. He has conducted research in the Peruvian Amazon on ecotourism in indigenous communities.