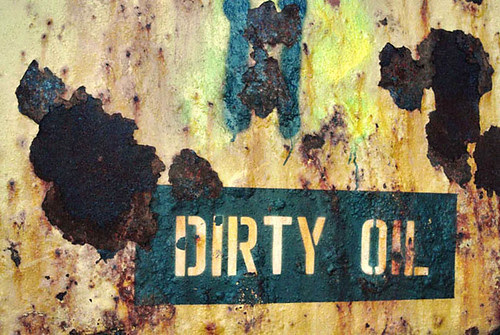 Cross-posted: From Kari at www.checktheweather.net

From Nigeria to Peru to Baton Rouge Louisiana, Big Oil is polluting the planet and the people. Recently, Shell gasoline settled with the Ogoni People of Nigeria for $15.5 million. The Ogoni people accused Shell of playing a role in the execution of Tribal leaders who were running a non-violent campaign to get Shell oil mines out of their village. In South America there is an on-going campaign to protect the Amazon rainforest from oil and natural resource extraction by big companies like Chevron. Checktheweather.net sat down with filmmaker and activist Han Shan to discuss his thoughts on the Ogoni Settlement and to catch a trailer from his new award winning documentary "Crude" by Joe Berlinger.

CTW: What was your initial reaction about the settlement?

Han Shan: There was an initial shock, A little bit of dissapointment that Shell is not going to be on trial but as it sank in more I realize that this is a victory. We have been working on this for a very long time. For a true victory Shell needs to change it's way of doing business all together.

CTW: What does this settlement mean for others fighting dirty oil around the world?

Han Shan: There are skeptics but by and large shell paid 15.5 million for crimes they say they didn't commit. There is no gag order on the plaintiffs and the lawyers. They were able to get the word out through media to show the collusion with Shell and the Nigerian military. I hope it will be inspiring to continue their fight and use legal mechanism. This case also broadened the use of the alien tort statute since Brian Anderson- Head of Shell Nigeria during Ogoni Massacre was brought to trial. It is also a powerful opportunity to look into who Ken-Saro Wiwa was. There are so many facets to this case.

Ken Saro Wiwa's non-violent movement was successful in getting Shell out of Ogoni in 1993 there are still pipelines and illegal oil spills and even if they don't have oil fields in Ogoni they have a triple standard (Shell) the way they act in the Niger Delta, the way the act in poor areas of the US and then how they act in the Suburbs of Dallas, Texas. The way Shell acts in the Niger Delta is shameful.

CTW: What can people do to support?

Han Shan: Move towards a sustainable energy future. Until we end our addiction to oil we will always have violence. Conflict over resources is universal. We need a much more radical solution than what oil companies are willing to deal with. Oil companies are now taking away from investing in renewable energy and more into tar sands in Canada.

The best thing is to keep spreading the word of what the true price of Oil is. We need a real solution that is going to support indigenous groups. we need to revisit free trade because we as americans play a huge role in what's going on in Peru and around the world. In Peru- Conoco-Phillips is the leading holder of exploratory license in Peru.

CTW: Now that this case is settled what's next?

Han Shan: This is a crime that you are never going to end with police. How do you lock up corporations?

CTW: What would bold climate legislation mean to you

Han Shan: We need to change up the economic incentives. There is no incentive to investing into renewable energies. Groups are working on a report to showcase that Shell is one of the prime players in weakening the Waxman-Markey bill. It's more cost-effective for these groups to invest in tar sands than renewable energy technology.

We need a Manhattan Project for renewable energy. I'm dissapointed that Obama has not used those funds to really re-imagine our country like the Manhattan Project or Marshall Plan. With the kind of technology that we have I am shocked we are not doing more.