Chevron Holds a Grudge, but the US Government Won’t Budge. 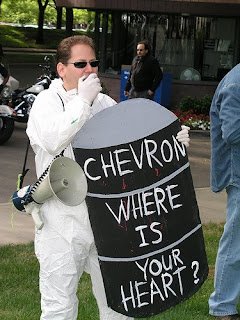 Every year, as if it’s tradition, Chevron lobbies the US Government to pull all of Ecuador’s trade preferences given to it by the United States. The preferences, called the Andean Trade Preference Act (ATPA), are intended to help Ecuador boost its economy by granting duty-free access to the US market. Chevron has attacked the ATPA at least three times, so it's pretty apparent they are willing to throw an entire country under the bus to cover up it’s own crimes. If these trade benefits were to be revoked it would cost nearly 350,000 Ecuadorian jobs and threaten irreparable harm between Ecuador and US relations.

The US government, the Obama administration, and a number of Senators have wholly rejected Chevron’s pleas. Last week 4 US senators wrote a letter to the USTR urging the strong rejection of Chevron's requests.

The letter stated: “We write to express our concern with Chevron Corporation’s efforts to petition your office concerning a pending lawsuit it is facing in the Ecuadorian legal system. It is our understanding that Chevron is seeking the threatened withdrawal of the [trade benefits] for Ecuador if this lawsuit moves forward.” (Read the full version of the letter HERE)

Furthermore, on Tuesday the Obama administration upheld all of the ADPA commitments from the US and once again rejected Chevron’s desperate campaign to cut Ecuador out on the ATPA entirely.

Now, one might ask why Chevron, a multi-national behemoth of a corporation, would lobby heavily to yank this away from Ecuador? The answer is simple, Chevron doesn’t like the cards they have dealt themselves in Ecuador, and now they want to punish the entire country of Ecuador because they are not getting their way. Chevron would rather steamroll a nation than face the music for their criminal operations in Ecuador.

So why is Chevron so adamantly trying to screw Ecuador? They are a scared bully.

Chevron is facing a $27 billion lawsuit from Amazonian communities that continue to live with the toxic environment Texaco (Texaco was bought by Chevron in 2001) left after decades of oil operations on their lands. It is estimated that 8 billion barrels of waste-water and 3 million barrels of crude oil were dumped in the Ecuador rainforest. Communities along the Aguarico River and beyond continue to live with high cancer rates, birth defects, and chronic health problems attributed to contaminated water supplies due to Chevron’s toxic leftovers. Chevron is fighting tooth and nail to save themselves from being held accountable in the court of law to the spills and the nearly 1000 open pits they left behind for Amazon communities to deal with.

Chevron knows it has little chance of being acquitted of these allegations, and a verdict in the trial is expected later this year. In fact, Chevron hasn’t liked their chances of winning in this suit for a very long time as it tried for nearly a decade to keep the case from ever reaching a court. Finally, it was brought before a judge in New York, where in turn Chevron insisted (and won) that the trail be entirely removed from the US and set to take place in Lago Agrio, Ecuador.

This is where things get confusing.

Chevron demanded that the trial be moved to Ecuador, presumably because Chevron liked its chances to manipulate the courts down there better than in New York. They were sorely mistaken in this assumption when they were greeted by a court system that was determined to rule this case through a just lens rather than be bullied by an oil company that had left a national ecological treasure in disrepair.

So now, Chevron is throwing accusations of judicial corruption and vowing not to follow any ruling that is brought by the Ecuadorian courts. So if Chevron is NOT willing to follow the rule of law in Ecuador, does that show their intention to NOT follow the law in any country in which they operate?

Chevron’s lobby efforts to the USTR have been realized for what they are; a desperate and vindictive attempt to further cause economic harm to a country that is has already endured a legacy of environmental and social crimes left in the wake of Chevron’s operations.