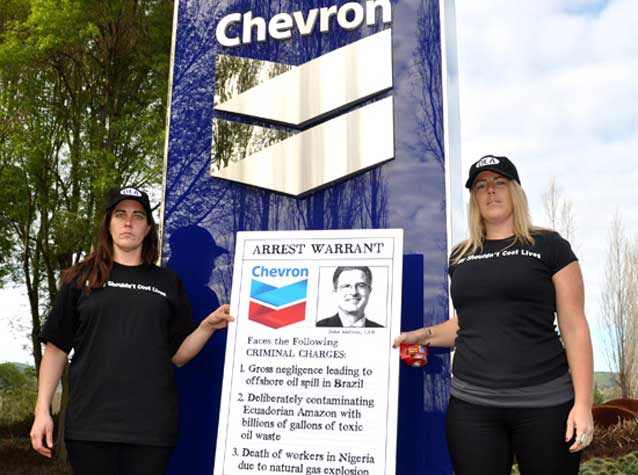 Twelve years ago Amazon Watch founder and Executive Director Atossa Soltani urged Chevron's board, shareholders, and management to vote down a proposal to acquire Texaco, presenting them with 800 pages of evidence that Texaco was an enormous liability for what it did in Ecuador. Affected communities in Ecuador ran ads urging Chevron not to purchase Texaco. Lawyers and investment bankers anxious to close the merger deal for their exorbitant fees dismissed Texaco's operations in Ecuador as a minor nuisance and acquired the company.


Fast forward to 2013. That "minor nuisance" has since ballooned into a $19 billion judgment that rises every year with interest. Chevron is already spending an estimated $400 million per year just in legal fees, dwarfing the $40 million it claims it spent on its sham clean-up in Ecuador. Leading the charge to buy Texaco was John Watson, then head of mergers and acquisitions and now Chevron's CEO. Is it any wonder that since he took over as CEO their "scorched earth" tactics to avoid paying for an actual clean-up have intensified exponentially?


At Chevron's Annual Shareholder meeting, when Atossa challenged Watson about his role and the multi-billion dollar liability that he brought to Chevron, he had absolutely no response. Sitting upon his "throne" as CEO AND Chairman of the Board, Watson had that luxury at Chevron HQ. It doesn't work everywhere, however. Yesterday Watson was deposed for several hours under oath and questioned about his role in the oil company's efforts to evade the judgment in Ecuador.


It is highly unusual for the CEO of any company to sit for a deposition, but Watson has made himself relevant by continually attacking lawyers for the rainforest communities with incendiary comments. In a bit of karmic justice, Steven Donziger, the Ecuadorian plaintiffs' longtime lawyer, and the person Chevron has "gone after with a vengeance, making him the focus of the extortion suit and even obtaining his personal diary" deposed Watson. Chevron lackey and New York Justice Lewis Kaplan has bent over backwards for Chevron, allowing them to depose Donziger 42 times in one month in Peru, San Francisco, Denver, New York, Houston, and Washington, D.C. (It should be noted that Kaplan appointed two colleagues – including his former law partner Max Gitter – to serve as "special masters" for the depositions. They earned $20,000 per deposition.)


It's a long way from real justice for the affected communities in Ecuador (who have personally called on him to do the right thing for years), but if anyone deserved to spend a day squirming under oath trying to explain his many lies and indefensible actions, it's John Watson.