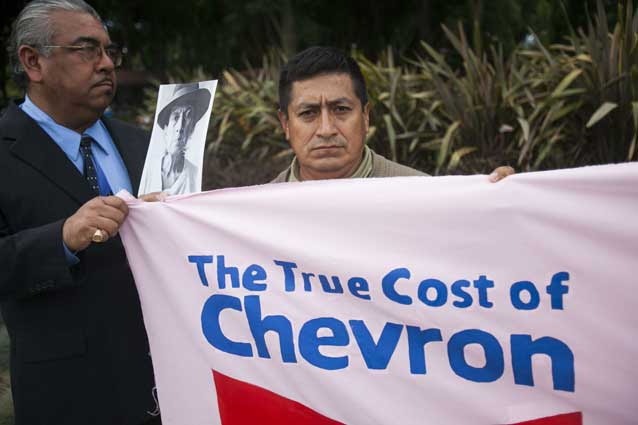 I can't think of a better term to describe the world that the Chevron board and CEO John Watson are living in than "alternate reality." It certainly must seem that way to Servio Curipoma, the peasant farmer I had the honor of accompanying on a journey from the Ecuadorian Amazon to the San Francisco Bay Area to confront Watson at Chevron's Annual Shareholders' meeting over his failure to accept an Ecuadorian court ruling that found the company liable for $19 billion in reparations for its reckless dumping of toxic wastewater into local water sources in the Amazon for over 20 years, resulting in an ongoing public health crisis and wide scale damage to the environment.


Servio sent a heartfelt message to the CEO of Chevron Corporation when he directly asked the board why they have not fired Watson for his decisions – both in Ecuador and in many other countries around the globe – that have cost the company billions of dollars and seriously harmed its reputation. As Watson dodged Servio and other concerned shareholders' questions – or responded defensively with false statements and condescending remarks – what became clear to all critical minds present is that this man, and this company, are either so heartless that they can overlook the true human cost of their profit-seeking operations, or that they are simply living in an alternate reality that the affected communities could never hope to understand.


Servio has lived in the Amazon for 32 years, in San Carlos, one of the communities most affected by Chevron's contamination. Servio's family originally moved to the Amazon from the area of Loja seeking a better life in the newly developing region. Their new life turned to tragedy when Texaco installed oil wells next to their family's home. Servio's parents became sick and died from cancer, as did an aunt and sister-in-law. Servio, who supports his wife and children by growing cacao, has dedicated his life to seeking justice for his parents' death and the health problems that continue to affect his family to this day along with the tens of thousands of affected people in the region.


This was Servio's second trip to the United States and it came at a very difficult time. Only a few days before he was scheduled to fly, Servio's wife got in a near fatal car crash that sent her to the hospital with serious injuries. His 17-year old daughter told him that she would take care of her mother and that he must travel to represent them and their community in the fight for justice they have been waging for almost two decades. Despite nearly losing yet another close family member, Servio maintained a resolve, strength, and sense of humor that brought tears to my eyes on more than one occasion. I found myself looking in the mirror and asking how I could learn to be as humble and kind as Servio despite everything that has happened to him in his lifetime.


On Wednesday, after several days of press conferences and speaking events, we entered Chevron's headquarters in San Ramon along with representatives of affected communities in Richmond, Nigeria, and elsewhere, escorted by police and private security. The false smiles of Chevron employees failed to cover up what they really must have been thinking as they searched us and led us to our seats in the main auditorium. A sickening video presented shareholders with fabricated information about Chevron's safe and responsible practices around the world, calling 2012 it's "safest year yet", despite fires at a refinery in Richmond and explosions at a drilling platform in Nigeria that caused unquantifiable damage to local communities. Another video responded to the Ecuador case, avoiding any mention of the harm caused to local peoples like Servio and focusing solely on unproven charges of fraud by the plaintiffs' legal team.


When it was finally time for the question and answer session, Servio, despite being figuratively in the lion's den, bravely stood his ground and forcefully addressed Watson and the board of directors.


"My name is Servio Curipoma. I am here on behalf of the 30,000 people affected by Chevron's contamination in the Ecuadorian Amazon," he announced. "My question to you all is ‘Why hasn't John Watson been ousted as CEO of Chevron for lying and hiding the truth from the shareholders about Chevron's crimes in Ecuador?'" He continued, "We have won verdicts in both the original case and appeal held in the court that Chevron chose. I lost both of my parents to cancer, and we continue to suffer from the effects of the company's operations. We are seizing Chevron's assets in Argentina, Canada, and Brazil. We will pursue the company to all corners of the world, until they have paid every cent they owe for the harm they have caused in the Ecuadorian Amazon."


Watson, in an offensively condescending manner, responded through a translator that he was sorry for the situation in which the indigenous peoples of Ecuador lived, and that they were being used by American trial lawyers; as if Servio and the thousands of others sick and dying from pollution in the Amazon don't have the mental capacity to think for themselves. He also said that there was "no proof that any of the water in the region is contaminated." Throughout the Q&A session, Watson responded to the barrage of criticism of his management and company operations saying that the affected peoples who confronted him were confused about the facts and should consult Chevron's team of experts. This is Watson and Chevron's alternate reality: in which Chevron's "experts" earning enormous salaries know better about the situation in which these affected peoples live than the people themselves.


Outside the meeting, Servio was greeted by a cheering crowd of over one hundred people and members of the press. He addressed those present, thanking them for their support. He proudly held up a photograph of his mother in the final throws of the cancer that caused her death.
"In Ecuador in the month of May," he shouted, "We celebrate our mothers. My gift to my mother and to all mothers suffering in the Amazon will be to fight until the day that I die or until justice is achieved for her murder caused by this corporation that thinks it is God!" He then held up a plastic bottle of brackish water with crude oil visibly floating on the surface; bottled at the source next to a Chevron-operated well. "Watson claims that the water in the Amazon is not contaminated – then I invite him to come over here and I will drink half of this bottle and he can drink the other half!" The ecstatic crowd applauded.


Later that day Servio said to me, "I didn't think anyone was going to show up in support. I thought that the American public had abandoned us in our fight. I am so happy to see that is not the case!"


As I bid my friend goodbye before his flight I thought: this is why I and others at Amazon Watch are here – to support people like Servio, one of the kindest and most honest people I have ever had the fortune to meet; to fight to ensure that corporations like Chevron cannot continue to get their way and violate human rights and destroy the planet all for the sake of their precious portfolio; to wake them up from their false reality. I feel honored to know Servio. I will see him soon, either in Ecuador or at the next Chevron shareholders' meeting.