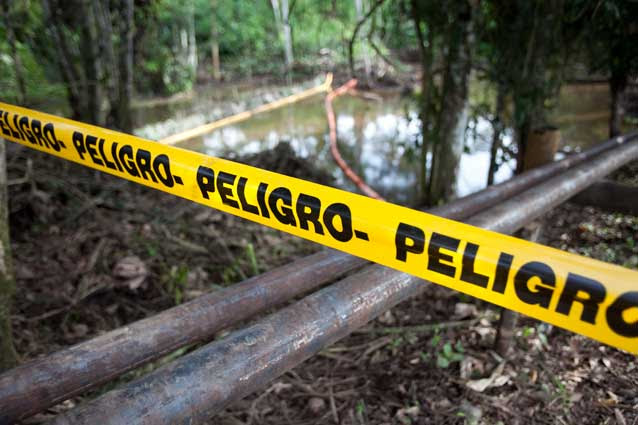 Chevron and its good friend Justice Lewis A. Kaplan are at it again. Last week the Chevron Pit posted a blog post detailing the constant irregularities and bias towards Chevron in Judge Kaplan's court, prejudice that has invited scrutiny from New York's Second Circuit Court of Appeals. However, in a perfect example of Chevron's hypocrisy and a legal team on steroids, the blog post has been CENSORED due to pressure from the sharks at Gibson Dunn. Gibson Dunn is just one of the 60 law firms – and 2,000 legal professionals – that Chevron has bankrolled to rob justice from 30,000 Ecuadorians who are still suffering from Chevron's legacy of contamination.


The censored blog and the mandamus petition to the Second Circuit document Kaplan's long-standing love affair with Chevron. Kaplan has repeatedly referred to Chevron's victims as "the so-called Lago Agrio plaintiffs," and has also called them "a number of indigenous people said to reside [emphasis added] in the Amazon rainforest." The mandamus petition quotes Kaplan's insinuation that an "important "company like Chevron should be guarded from judgment collection efforts that apparently might be acceptable if the company were deemed less vital:


"[W]e are dealing here with a company of considerable otherwise importance to our economy that employs thousands all over the world, that supplies a group of commodities, gasoline, heating oil, other fuels and lubricants on which every one of us depends every single day. I don't think there is anybody in this courtroom who wants to pull his car into a gas station to fill up and finds that there isn't any gas there because these folks have attached it in Singapore or wherever else."


As the censored blog notes, and as New York's highest appeals court has noticed, Kaplan's bias goes far beyond his incendiary comments. Kaplan is "trying to block key evidence that Chevron and its outside lawyers have mounted an espionage ring to spy on adversary counsel...and has allowed Chevron to hide numerous internal company emails that clearly show corruption and bribe attempts in Ecuador..." Chevron's lawyers censored the end of that last sentence, which accused Chevron of a massive bribery scheme.


In another baldfaced example of bias, Kaplan also is letting Chevron maintain as "confidential" a series of damning internal videos that prove the company committed a massive fraud in Ecuador by hiding evidence of contamination from the court. Chevron itself shot the videos of its own technicians laughing at the pollution the company left behind and discussing how they would hide it from the court. Under Kaplan's rules, this type of criminal activity cannot be used at trial and must remain hidden from the public.


The twisted irony is that Chevron has produced misleading and out-of-context videos to attempt to discredit the plaintiffs from footage it obtained by getting Kaplan to force independent filmmaker Joe Berlinger to turn over his outtakes in a clear violation of his 1st Amendment rights. While that footage was supposed to remain confidential, it has become a centerpiece in the web of lies and PR efforts mounted by Chevron.


Earlier this year Chevron attempted to subpoena Amazon Watch to try to silence us for standing with communities fighting for justice in Ecuador. Despite the fact that Amazon Watch is based in the San Francisco Bay Area, Chevron and Kaplan tried to move the case to New York so that Kaplan could rule on it. They both lost, and a San Francisco Federal Judge entirely quashed Chevron's subpoena.


It seems increasingly like Kaplan is at Chevron's beck and call.