Honoring Parents who Died of Cancer, Servio fights for Environmental Justice in Ecuador

It's already been a busy couple days for the Ecuadorians who have come from the Amazon to the U.S. to tell their painful stories of living with the legacy of Chevron's contamination in their lands. On Tuesday and Wednesday in New York, Secoya indigenous leader Humberto Piaguaje and representative of the farming communities in the region, Servio Curipoma, met with reporters, lawmakers, shareholders, and supporters, running between interviews and meetings and presentations with barely time to breathe.

In the first couple of whirlwind days, Servio, who is traveling outside Ecuador for the first time, has displayed an infectious and inspiring mix of courage, poise, energy, and heart. Whether talking to supporters or reporters, he deliver his message with a sincerity and urgency that is impossible to discount [see this post from earlier today, which includes a short video profile of Servio].

His urgency comes from the realization that he and his loved ones are surrounded by poison every day, and that every day more people in his community fall ill. And beyond the courage and poise and sincerity is also a deep and abiding sadness that seems inscribed deeply upon his hearty soul. 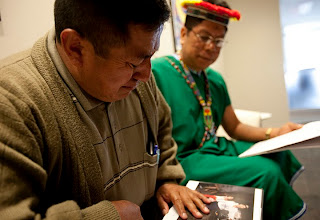 Before a meeting with journalists today, Servio spends a quiet moment with a photo of his mother, who died of uterine cancer in 2006. Photo by Caroline Bennett

Servio lost both his mother and father to cancers that their doctors blame on exposure to poisons caused by Chevron's reckless pump-and-dump oil operations in their lands. Today in New York, he told a group that he came here to the United States in order to honor the memory of his parents, whose deaths he mourns daily.

And so, over the last couple days, Servio has carried a book with photos and a story about his late mother, Rosana Sisalima [read a profile of here on this blog]. The photo-book has served as a touchstone for him, reminding him of the injustice of losing his mother too soon, and watching her wither away. Only a few years before her premature death, she had watched with anguish as her husband — Servio's father — a farmer like his son, succumbed to stomach cancer at the age of 64. And then, only a few year later, uterine cancer took her. She was 66.

Uterine cancer victim Rosana Sisalima with her granddaughter at their home in San Carlos on November 24, 2004, shortly before she died. Photo by Lou Dematteis.

Crude Reflections, the book Servio carries, documents almost 15 years of the effects of Chevron's contamination in the Oriente region of Ecuador, and the communities' inspiring struggle for justice. Published by City Lights Books, the book is by photographers Lou Dematteis and Kayana Szymczak, with interviews and stories written by journalist Joan Kruckewitt. It is a powerful document, and you can buy a copy here.

I write this update from a train bound for Washington DC. Servio & Humberto and my colleagues at Amazon Watch ran to catch the train with minutes to spare, and early tomorrow morning, our meetings and outreach efforts resume. After a couple days in DC, we're on to the San Francisco Bay Area to continue our efforts ahead of Chevron's shareholders meeting.

There, Servio Curipoma will confront Chevron's leadership, driven to spare anyone else the pain and rage he has felt at having his parents stolen from him by an oil company's disregard for his family's humanity. Stay tuned.