Ecuadorian Delegates Ready for Long Journey to the U.S.

In less than one week, Amazon Watch and our allies at Rainforest Action Network (RAN) will be supporting a delegation of courageous indigenous and campesino leaders as they journey from the remote Ecuadorian Amazon—area tragically affected by Chevron/Texaco’s harmful oil operations—all the way to the United States. The three delegates will travel on behalf of more than 30,000 affected people to New York, Washington DC, and finally to Chevron's backyard in the San Francisco Bay Area to demand that Chevron satisfy the judgment handed down by an Ecuadorian court ordering the company to pay to clean up its contamination, and to provide clean water and health care facilities for affected communities. Along the way, they will will meet with reporters, lawmakers, institutional investors, shareholders, and civil society allies, building support for their inspiring efforts.

The three delegates are poised to expose the wrongs committed by Chevron/Texaco, as all three have experienced the terrible legacy of the company’s operations in their own communities.

Secoya tribal leader Humberto Piaguaje has seen his tribal group decimated by horrific contamination that has resulted in forest loss, displacement, and cultural degradation—when at one time the Secoya population numbered in the thousands, now only about 350 remain.

Delegate Carmen Zambrano has witnessed the illnesses that have ravaged her community, the deaths of family members, friends, and neighbors, the murder of community members, and the raping of local women. Her own children are terminally ill and developmentally disabled.

Serbio Curipoma has lost both of his parents and a sister to cancer, attributed to the crude waste in local drinking water, and he and his remaining family members suffer from myriad health problems, owing to the fact that their home sits directly atop an unremediated covered oil pit.

All three delegates are courageously standing up to a giant corporation to demand that Chevron obey the court’s orders and pay for all the damage it has caused. While each recognizes that no amount of money will bring back the dead, they continue to work tirelessly in their struggle for justice, so that their children’s children can live a life free of contamination. 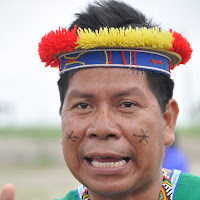 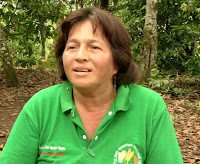