Journey to the Amazon, A Forest Worth Fighting For

The article below is cross-posted from the new official blog of Amazon Watch, Eye on the Amazon (check it out!).

The post is by AW's Development Associate Jenny O'Connor. By the way, when she's not helping to raise money and build support for our work throughout the Amazon Basin, Jenny is one of the directors of an inspiring grassroots organization with an international reach called Groundwork Opportunities. 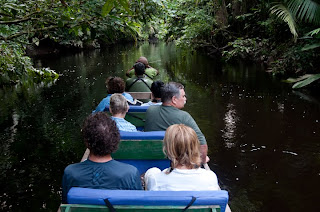 This month a group of Amazon Watch supporters embarked on a journey to the heart of the Ecuadorian rainforest. From the contaminated rivers and pits of Chevron-Texaco's former operations to the pristine and breathtaking Napo wildlife lodge in Yasuni National Forest, the trip offered a new perspective on the true human and environmental cost of oil extraction, as well as the beauty that is worth saving.

It was a huge experience for [my son David]. It's so important for young people to meet others who inspire them and I know he really felt that way about [Amazon Watch campaigner] Mitch, Michael Mullady (the documentary photographer) and the people he met in Ecuador such as Pablo and Donald. My mother had a poster in our kitchen for years that said, "Through our great good fortune, in our youth our hearts were touched with fire". It was given to us to learn, at the outset, that life is a profound and passionate thing. Something like that happened for David.
– Julie Zuckman who traveled with her son David, upon returning from the delegation

From 1964 to 1990, Texaco (now Chevron) turned the pristine rainforest of northeastern Ecuador into an energy sacrifice zone. Hundreds of unlined open waste pits filled with crude oil, poisonous drilling muds, industrial solvents, acids, and heavy metals, leaching into the rivers and streams. After two days of visiting pit after pit, we drove along an old dusty road near the oil boom town of Lago Agrio, the smell and taste of oil burning the throat. We were headed to meet with the leaders of the Cofan people and listen to stories of death and destruction in their ancestral territory. In the somber canoe ride back to the car, a fellow traveler whispered, "What would possess men to destroy the earth like this?"

A day later, we found ourselves deep in the Yasuni national forest, slowly edging along a quiet river under the forest's canopy until the river opened up into a magical black water lagoon. We had arrived at the Napo Wildlife Center, and ecotourism lodge operated by the Quichua community. It is 82 square miles (53,500 acres - over 21,400 hectares) of the most pristine Amazon Rain Forest anyone has ever seen, an important UNESCO Biosphere Reserve, and the largest tract of tropical rain forest in Ecuador. Two days here and we all leave knowing that there is beauty on this earth...and it is worth fighting for.

Click here to view the full gallery of beautiful photos from this trip.