In the two months since John Watson took over as the new CEO of Chevron, over 325,000 people from 150 countries have signed a petition with a clear message to Mr. Watson and Chevron: Clean up Ecuador now! 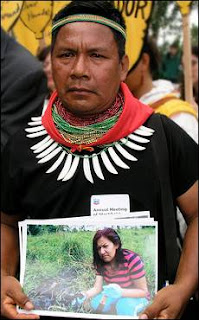 Emergildo Criollo, indigenous leader of the Cofan people, has traveled all the way from his home in the Amazon rainforest of Ecuador to personally deliver an appeal from the affected communities along with the petition to CEO John Watson and Chevron at their headquarters in California. Today, in San Ramon, CA, home of Chevron's headquarters, Emergildo is delivering his letter, along with your 325,000 signatures of support.

Ask to speak with Chevron CEO John Watson. You'll be directed to his voicemail. Leave a message: "I support Emergildo (pronounced "Em-err-HILL-doe"). Please clean up Ecuador."

It's that simple. And collectively, our voices will be heard as a global chorus that gets louder by the day. More tips for making the call are at the bottom of this message.

As we've recently told you, Emergildo lost two young sons to sickness caused by Chevron's contamination. His wife contracted uterine cancer and had to undergo a hysterectomy. Emergildo's devastating story is the story of thousands of people in Ecuador suffering and dying from Chevron's toxic legacy.

Along with our allies at Rainforest Action Network, Amazon Watch's Clean Up Ecuador Campaign is supporting Emergildo to deliver his message to Chevron, and helping him meet reporters and lawmakers in Sacramento. We know it's our job to amplify his voice and the voices of the people in the Amazon who have been devastated by Chevron's malicious neglect.

Ask for Chevron CEO John Watson. When you get his voicemail, leave a message: "I support Emergildo. Please clean up Ecuador."

We are making an impact on Chevron. Last week, Chevron Vice President and chief legal counsel Charles James abruptly resigned. The company is being tight-lipped about the move but James has been guiding the oil giant's abusive and risky strategy to try to evade responsibility in Ecuador. It seems maybe the strategy – for which Chevron has taken a beating in the media, the courts, and the court of public opinion – has finally caught up to him.

Please, take action now and call Chevron to support Emergildo and the tens of thousands of people in Ecuador who are seeking justice and a healthy environment for their families and future generations.

For reference, below are demands adopted from the global petition that we are presenting to Chevron today. You may want to mention these points in your voicemail message to John Watson:

Born and raised in Baltimore, Han Shan is a human rights and environmental justice campaigner living in New York City. He is a coordinator with the Clean Up Ecuador campaign for Amazon Watch.