This is the first in a series of reports from the field in Ecuador's northern rainforests, site of perhaps the largest oil related disaster in the world and ground zero of Chevron's $27 billion liability in the ongoing Aguinda v. Chevron lawsuit.

Only a few steps down the airplane staircase, and I could feel the beads of sweat starting to drip from my brow. I began second guessing the "triple protection" claims of my deodorant – clearly R & D never tested it in a place like this. Whether the sweat was from the stifling heat or fear of the military guys decked out in camo with automatic weapons greeting the plane, I'm not sure. Either way, Lago Agrio's welcome wagon could use some work. 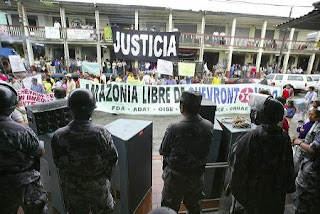 Lago Agrio – literally "Sour Lake" – was named after Texaco's first big oil discovery in Texas. In the early 1960s, Texaco scoured this pristine, tropical rainforest – the headwaters of the Amazon – with a massive civilian and military force unheard of at that time in South America. Billions of barrels of crude lie beneath the rainforests of Ecuador, and Texaco was going to find it by any means necessary. Before Texaco's arrival, this area was home to several indigenous populations – the Cofan, Secoya, Siona, Huaorani, Kichwa – and two nomadic groups living in voluntary isolation – the Tetetes and the Sansawari. Blessed with some of the most biodiverse forests on the planet, and thriving rivers like the Aguarico ("Sweet Water"), these groups made their living by hunting, fishing, gathering, and cultivating small traditional crops in this incredibly fertile landscape. With Texaco's first oil well, that all changed.

It is well documented by recent major news media that Texaco built over 300 wells, dumped 20 billion gallons of toxic wastewater, and spilled over 18 million gallons of pure crude between 1972 and 1990. During that time, huddled in a boardroom in upstate New York, Texaco's smartest guys in the room made a cost cutting decision that would prove lethal to Ecuador's Amazon communities. Instead of following standard industry practice and complying with Ecuadorian law, Texaco insisted on dumping toxic by-products directly into the rivers, streams, and rainforest land instead of re-injecting them back into the ground (have a look at the Aguarico River after Texaco). To save a buck, Texaco had condemned these communities to decades of environmental destruction and human suffering. This double standard appears to be a pre-cursor to the pattern of racism of senior Texaco management and board, which came to light in a landmark anti-discrimination suit in the 1990s.

You barely have to leave the airport to see oil extraction's impact on the region. While most of us expect to see a line of taxis waiting outside airports, in Lago Agrio you are greeted by Lago Agrio well #11 and its adjoining waste pits, sitting directly across from the airport. We pass by and head into town, where giant oil storage tanks, gas flares, flow lines, satellite dishes, and worker encampments hum behind fences.

It is here, in Lago, where Texaco set up shop decades ago. Texaco made Lago the headquarters of its drill and ditch oil operations on-the-cheap. Texaco stopped operating in 1990 and turned things over to the state run Petroecuador in 1992, and the U.S. oil giant's dump and run legacy was cemented.

Lago is a bustling boomtown (think gold rush kind of boomtown) a mere 12 miles from Ecuador's border with Colombia. Paramilitaries and left wing guerrillas from Colombia's 40-year civil conflict often cross over the border for some R & R, and the province is one of the poorest despite being the country's largest oil producer. As we get into downtown, it's full of telling symbols that point to the human tragedy and criminal acts that devastated the region's indigenous peoples, farmers, and the rainforests they inhabit. Hotels named "Oro Negro" (Black Gold), bus cooperatives named "Flota Petrolera" (Petroleum Fleet), and pharmacies on virtually every corner, illustrate a legacy these communities face everyday. And in what has to be one of the most ominous signs that a culture is on the decline, hotels named after the indigenous groups who once occupied the area – the Cofan and Secoya.

Here in Lago we were met by members of the Amazon Defense Coalition, a grassroots organization comprised of thousands of campesino farmers and representatives of five indigenous nationalities, all of who are affected by Texaco's reckless oil operations and part of the ongoing class action lawsuit against Chevron (Chevron bought Texaco in 2001). The Frente, as the group is known in Spanish, will be our guides over the next few days as we look at some of the 1,000 toxic waste pits abandoned by Texaco. These pits were allegedly "cleaned-up" by the company, but as we would soon learn nothing could be further from the truth as we begin to meet and talk with local people suffering the human effects of systematic contamination over almost four decades.