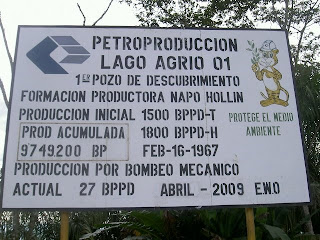 With the landmark Aguinda v. Chevron lawsuit underway in the Superior Court of Lago Agrio since 2003 (after ten years in New York courts), this town and the surrounding one million hectares of Texaco's former concession is home to what has been dubbed the "trial of the century" and the "Amazon Chernobyl". There is no lack of evidence backing these grand descriptions, including dozens of judicial inspections, a global damages assessment, and more than 64,000 soil and water samples. [Joe Berlinger documents much of the legal process in his award winning film Crude – coming soon to a theater near you.]

Despite Chevron's attempts to delay and derail the trial, the marathon case is in its final lap. The trial's home stretch has produced a flurry of activity out here. So it's no surprise that as we check into the hotel in the ramshackle town to begin our multi-day tour of Chevron's toxic legacy, we see some familiar faces.

Chevron tecnicos and lawyers can often be found milling around the Grand Hotel de Lago, surely aggravated by having been stripped of their privileged digs in their private villa on the grounds of Ecuador's military base. Their suites at the hotel are probably more swanky than the military base, but less politically convenient. Collusion between the military and Chevron has been commonplace and dates back to the Texaco years when the military served as the company's de facto private security force. Texaco's contract for oil production was signed by none other than General Guillermo Rodriguez Lara, Ecuador dictator-in-chief brought to power by a military coup in 1972.

Fast-forward about 40 years, and not much has changed. Ecuador's military was still doing Chevron's bidding. The company, literally in bed with the RAYO 24 brigade in Lago, managed to get their buddies at the base to come up with a bogus military report canceling an historic judicial inspection poised to be extremely unfavorable for the company.

The inspection of the Guanta station was to be the first on indigenous land, a symbolic moment for the Cofan who had been waiting decades to see the faces of those responsible for this disaster and the Ecuadorian lawyers who were defending them. The Cofan planned to mobilize by canoe and bus to bear witness to the inspection and provide first-hand testimony to the judge, only to have him cancel the inspection at the last minute due to a phony report that accused the Cofan of harboring plans to kidnap Chevron employees. [The Cofan have sued for defamation].

But Chevron's extra-judicial tactics blew up in their face. The report was later proven to be totally baseless, the military individuals involved were reprimanded, and the company was finally booted from the base by current Ecuador president Rafael Correa.

At the hotel, we eat lunch at a table adjacent to Chevron tecnicos, keeping our conversations low, and pack up to head towards Lago Agrio #1 — where it all started. The well was Texaco's first, and after hundreds of thousands of barrels, it's still pumping today.

We ride down Lago's dusty main street, and head out of town. Several oil pipelines parallel the road, snaking between trees, over hills and streams, passing through children's front yards.

About fifteen minutes outside of town, we arrive at Lago Agrio #1. It's rather unassuming now. A pumpjack (or nodding donkey) silently plugs away, pulling the last barrels out of what was once the largest find in South America. Lago #1 is now run by Petroecuador and produces about 27 bpd (barrels per day) compared to the 1500 bpd at its peak. A sign in the background marks the history of the site, which drastically changed the trajectory of this small Andean nation.

When Texaco found oil, it was a Beverly Hillbillies moment ("oil that is...black gold...Texas tea"). Touted as a new era, oil was supposed to be the silver bullet that would bring Ecuador out of poverty and permanently put Ecuador on the road to prosperity and international importance. So said Texaco.

In 1972, Texaco's first barrel of oil was paraded through Quito's historic center. Historic footage shows people lunging to touch the barrel for luck. The archdiocese of the Catholic Church blessed the feted barrel. Texaco promised to bring state of the art, modern U.S. oil industry technology. Ecuador joined OPEC. It gained access to international credit lines, and borrowed with gusto.

But it wasn't long until the blessing turned into a curse. Oil was no panacea. Ecuador didn't become a bastion of prosperity. And, unlike Jed, Jethro, and the Clampett kin, local indigenous peoples couldn't just flee to some fancy enclave and start anew. This was a sitcom where a foreign company drills for oil on the Clampett's land without their permission, dumps all the toxic wastewater and crude byproducts in their drinking water, then takes the money and runs. Not exactly must-see TV.

We leave Lago #1 and head to one of Texaco's infamous "remediated" pits. Chevron claims it carried out a government-supervised $40 million clean up. Local residents affirm, and videos from the time show, pits were merely covered with dirt. In the next post, we'll look at what we find.