Chevron CEO John Watson is the one person ultimately responsible for his company's refusal to abide by the rule of law and pay a $9.5 billion judgment for toxic dumping on in Ecuador's rainforest.

But we cannot forget that another high-level Chevron executive currently in Watson's employ --Ricardo Reis Veiga -- did much of Chevron's corrupt "dirty work" in the South American nation and deserves to be held accountable for his leading role in the misconduct. The fact Watson continues to try to protect Reis Veiga reflects poorly not only on Watson's own lax ethical standards, but it also creates significant risk to company shareholders as we will see below. 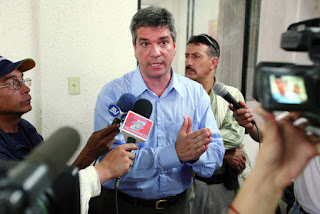 First day of Ecuador trial -- October 21, 2003: Chevron's Reis Veiga tries to explain the impossible while his Israeli bodyguard casts a wary eye from behind. Photo by Lou Dematteis.

For years in the 1990s, Reis Veiga was known in Ecuador as the "architect" of the Chevron-Texaco fraud. As Texaco's main lawyer on the case, he even was indicted after the villagers presented information about how he had "certified" a fake clean-up to to Ecuador's government in a desperate effort to help the company evade liability. Under pressure from Chevron, prosecutors dropped the criminal charges but the cold hard facts about Reis Veiga's corruption cannot so easily be erased.

Watson and Chevron's public relations flaks try mightily to keep Reis Veiga out of the public eye. But Watson is more than happy to keep him on the Chevron payroll, no doubt so he won't blow the whistle on the company. (A Chevron whistleblower earlier this year disclosed internal videos showing company scientists trying to hide evidence of oil contamination from the court.)

A lawyer and Brazilian national, Reis Veiga set in motion Chevron's disastrous Ecuador policy when in 1995 he negotiated a "remediation" agreement on behalf of Texaco with certain corrupt officials in the government. (Chevron bought Texaco in 2001 and assumed its liability in Ecuador.) The agreement allowed Texaco to go through the cosmetic motions of a clean-up while spending virtually no money to address the underlying environmental impacts. Those impacts include the abandonment of roughly 1,000 toxic waste pits filled with oil sludge and the dumping of billions of gallons of toxic "water of production" into streams and rivers relied on by local inhabitants for their drinking water.

In exchange for a promise to do a cosmetic clean-up, Texaco received a "release" from Ecuador's government for any claims the government might assert against the company for the environmental damage. The release was given before the first shovel was even put in the ground to do the work. (As a critical aside, the release did not bar -- nor could it under Ecuadorian law -- the claims of the private citizens who had brought the historic lawsuit that 16 years later resulted in the judgment.)

The more salient point is that Reis Veiga's "remediation" was shot through with fraud. Texaco spent only $40 million to address the massive contamination which included hundreds of equivalent U.S. Superfund sites. This is far less than a penny on the dollar of what a real clean-up would cost, according to the later court judgment and various independent analyses. Texaco also spent about one-tenth of one percent of the roughly $50 billion BP has allocated to its much smaller 2010 spill in the Gulf of Mexico.

While Chevron now spends millions of dollars on ads claiming it supports the communities where it operates, Reis Veiga negotiated a deal to screw the affected communities of Ecuador.

What had to surprise Chevron and Reis Veiga is that the trial in Ecuador over the company's dumping -- a trial that the company fought desperately to block -- actually happened. The indigenous communities had the wherewithal to hire lawyers and the funds to hire technical experts. Evidence against Chevron quickly started to mount. And as a result, a Chevron lie that already was visible to the naked eye in the oil fields was verified in laboratories as well.

Scientific sampling data from field inspections during the trial in Ecuador showed exorbitant rates of cancer-causing petroleum hydrocarbons at sites Reis Veiga had claimed were cleaned. As an example, at Sacha 65 -- a former Chevron well site that Reis Veiga had certified as remediated to Ecuador's government back in 1998 -- a soil sample lifted during the trial had 35,380 ppm of petroleum hydrocarbons. That's more than 350 times higher than the maximum amount allowed in most U.S. states. It also exceeded Ecuador's regulatory norms by an order of magnitude.

In fact, there were 54 separate sites supposed "remediated" under the Reis Veiga plan that were inspected during the later trial. All demonstrated the presence of harmful toxins and all but two were above Ecuadorian regulatory norms. Some exceeded the norms by dozens and even hundreds of multiples.

By its own admission, Chevron applied its wholly inadequate clean-up methods to only a small portion of the waste pits it abandoned in Ecuador. Chevron simply excluded 85% of the pits from its flawed action plan altogether. Those pits were left to continue contaminating soils and drinking water for centuries absent compliance with the Ecuador court judgment.

Even if one focuses only on the small fraction of waste pits Chevron took responsibility for under Reis Veiga's plan, many of those were left untouched on the theory they were being used by villagers for fishing. Others were left untouched based on a simple drive-by inspection that involved no actual soil testing. In actuality, all were filled with oil sludge.

For the pits it did address, Chevron used heavy earth-moving equipment to cover up the sludge with dirt without cleaning out the toxins. Reis Veiga's plan was to bury evidence of the crime for the lowest possible cost. He never imagined these hidden pits would be unearthed by scientists working for the villagers during the later trial.

Reis Veiga also duped Ecuador's government. During the negotiation over the clean-up plan, he conspired with certain officials to adopt a clean-up standard for petroleum hydrocarbons 50 times more lax than the typical U.S. regulatory norm. He then used a bogus soil sampling test to measure contamination that captured only a tiny fraction -- often less than one percent -- of the hydrocarbons present. His goal was to "certify" the pits as safe using the fraudulent sampling results. (For more on Chevron's use of the bogus test and its other scientific fraud in Ecuador, see here.)

For the communities in the affected region, Chevron's Potemkin clean-up actually made the matter worse. Many villagers moved next to the newly covered waste pits thinking Texaco must have been acting in good faith when it told locals it was remediating. That's just a sickening level of cruelty even for a company recently named the worst global corporation at a ceremony in Davos.

Aside from the outright fraud in the design and execution of the Reis Veiga plan, the Chevron executive did nothing to address the separate impacts of the billions of gallons of benzene-laden water of production that were discharged into streams and rivers. Reis Veiga also ignored the need for medical care and monitoring to deal with skyrocketing rates of cancer and other oil-related diseases.

The longterm environmental and human toll of this failure to remediate has been staggering. The affected area, home to dozens of impoverished indigenous and farmer communities, has extremely high rates of childhood leukemia and other cancers. There is also virtually no medical care. To be treated for cancer, once has to jump on a bus and travel several hours over tortuous mountain roads to Quito. (Numerous independent studies documenting the cancer can be accessed here. For photos and stories of some of the victims, see this gripping report in The Huffington Post by photojournalist Lou Dematteis.)

The economic impacts also have gutted the communities. While Watson makes approximately $30 million per year in compensation, the average indigenous person in the Amazon is lucky to pull in $1,000. That's after Chevron robbed the communities of access to clean water and most of the other non-monetary riches found on rainforest ancestral lands.

Reis Veiga's misconduct was not limited to the bogus remediation. During the trial, he was heavily involved in the halting of a critical judicial inspection (see paragraphs 18 to 27 of the referenced document) by fabricating a security threat against Chevron lawyers. His fingerprints were all over the work of Chevron consultant John Connor when he wrote a field manual directing company scientists to lift soil samples only from "clean" spots far away from sources of pollution in an attempt to deceive the court.

Given this outrageous and patently criminal conduct, why is Reis Veiga still employed at Chevron?

The reality is that an oil company management team acting Mafi-style in Ecuador cannot afford to let its skeletons migrate out of the closet. This is the same company that recently employed the author of a legal memo (William J. Haynes) justifying the torture of detainees when he was an official at the Pentagon. Other egregious Chevron wrongdoers in the Ecuador matter, such as discredited witnesses Diego Borja and Alberto Guerra, are kept close with fat salaries, homes in gated communities on golf courses, stipends for spouses and family members, and all sorts of luxury perks such as first class air travel that are hidden from shareholders and the public.

Then there are the academics who have humiliated themselves and compromised the integrity of their institutions by trying to defend Chevron's atrocities in Ecuador in exchange for money -- people such as Notre Dame Law Professor Douglas Cassel, Dr. Douglas Southgate of the climate change-denying Heartland Institute, and Dr. Pedro J. Alvarez of Rice University. Their involvement comes from the same dark place in Chevron's legal department where ethical rot has taken hold under the leadership of General Counsel R. Hewitt Pate, and where Reis Veiga hangs out.

Chevron's Board of Directors -- notorious for its lack of independence given that Watson himself is Chairperson -- is letting an environmental liability turn into a major business problem. Company operations in Canada and elsewhere are under seige as the villagers try to collect on their judgment by targeting Chevron's assets. In Canada, the company has an estimated $15 billion worth of refineries, oil fields, office buildings, and intellectual property rights.

Not to be glib, but we suspect the indigenous people of Ecuador are going to own a good chunk of that portfolio if the company does not abide by its legal obligations.

We are still waiting for any sign that the Chevron Board will take the necessary steps to fulfill its fiduciary obligations. It might start much as BP did in the Gulf -- by immediately paying compensation to those affected. It might follow up by ordering an independent review of the legal violations involved -- including the possible bribery of foreign officials -- in the desperate attempts by high-level company officers and employees to extricate themselves from this problem.

On behalf of Texaco and now Chevron, Reis Veiga executed a strategy in Ecuador of cover-up rather than clean-up. The disturbing facts are part of the plain history of Chevron's billion-dollar campaign to obtain impunity.

(For the evidence of Chevron's environmental catastrophe and fraudulent clean-up, see this power point presentation by the former scientist for the affected communities. For a summary of Chevron's forum shopping and jurisdictional shell game, see here. For more on Chevron's efforts to corrupt the Ecuador trial process, see this sworn affidavit and these counterclaims.)